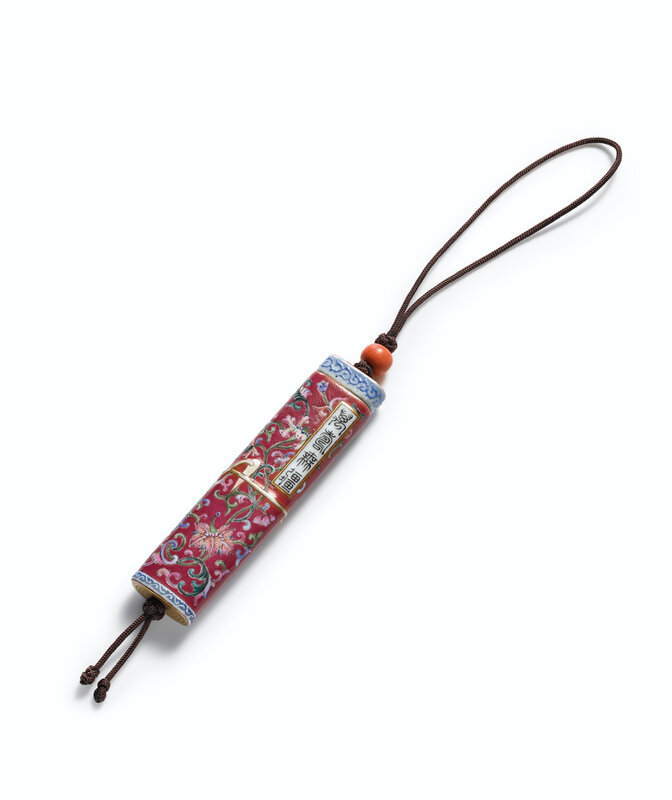 of rounded rectangular form, the body finely painted to imitate a ruby-ground brocade scroll delicately enamelled with multi-coloured flowers including lotus and lilies connected by foliate scrolls, tied together with a moulded gilt cord and toggle, the titleslip inscribed with the four characters wan shou wu jiang ('Endless Longevity') in seal script, the hems of the brocade painted with a classic scroll in blue enamel, the two ends gilt with concentric ovals pierced with a small aperture, threaded through and tied with a beaded tassel.

Note: Containers of this small size were produced during the reign of Qianlong for a range of different purposes. Compare a toothpick holder in the National Palace Museum, Taiwan, inscribed on the cover with the hall name Leshantang, and with a poem on the inside, also made in the form of a rolled up scroll, but with slightly different brocade pattern and landscape, illustrated in Emperor Ch'ien-lung's Great Cultural Entreprise, National Palace Museum, Taiwan, 2002, cat. no. I-48. See also a similar pink-ground small box sold in these rooms, 25th April 2004, lot 57.