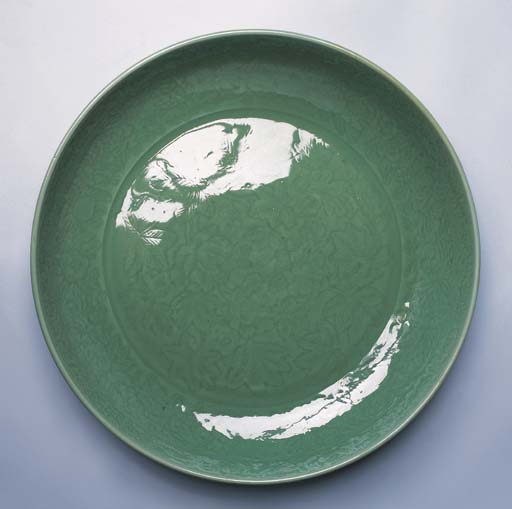 Heavily potted with a slightly convex base and gently curved sides, the body incised under the glaze with a large blooming peony spray at the centre, below a continuous fruit-and-flower scroll in the well and a narrow band of lingzhi-scroll at the rim, the exterior similarly incised with a scrolling lotus.

Note: An almost identical dish in the Idemitsu Museum of Art, Tokyo, is illustrated in Chinese Ceramics in the Idemitsu Collection, Tokyo, 1987, pl.597, together with a slightly larger dish decorated with a peach branch in the centre and flowering plants round the well as colour pl.153, and an undecorated dish of similar size as colour pl.156. Another large dish decorated with peach is in the Palace Museum, Beijing, illustrated in Longquan Qingci, 1966, pl.58; and another is in Chinese Ceramics in the Topkapi Saray Museum, Istanbul, 1986, vol.I, no.242. The bird of prey heavily modelled perched on a pierced tree-trunk base, the head raised and turned sharply to the left, with wings semi-spread, the circular cover with aperture at the centre, overall freely and deeply incised, the exterior and interior covered with a thick glossy sea-green glaze with large network of crackles, wood box. The cup with flaring sides supported on a solidly potted stem with slightly spreading foot, the cup incised at the interior with a chrysanthemum flower-head at the centre below a key-pattern band at the rim, the exterior with eight scrolling flower sprays, fitted box.

Note: Very few celadon octagonal stem-cups of this date appear to be recorded. One very similar example is illustrated by B. Gyllensvrd, Chinese Ceramics in the Carl Kempe Collection, Stockholm, 1964, no.156, p.65. Another was sold in Hong Kong, 2 May 1995, lot 10. Compare also the smaller Geyao octagonal stem-cup in the Palace Museum, Beijing, illustrated Zhongguo Meishu Quanji (A Complete Anthology of Chinese Art, Ceramics), Shanghai, 1988, vol.3, no.92, where it is dated to the Chenghua period.