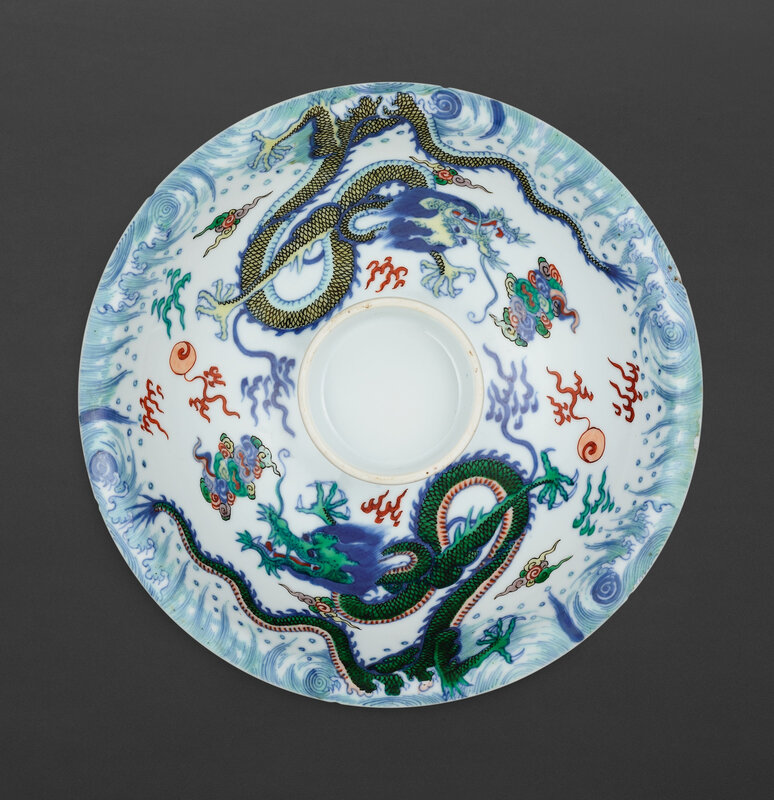 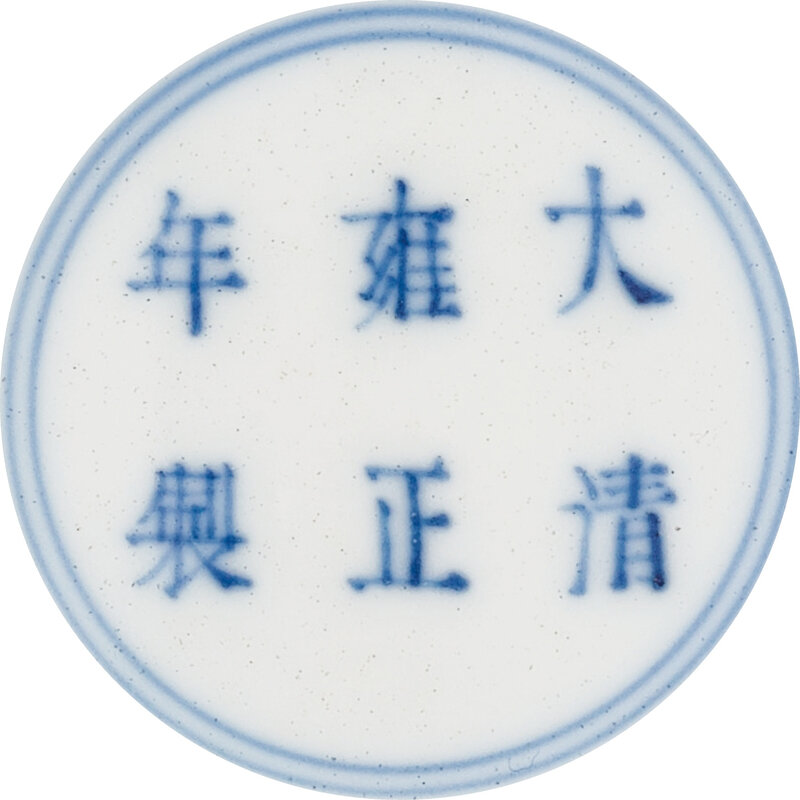 of conical form, the steep flaring sides supported on a straight foot, brightly painted in vivid enamels with a green and a yellow five-clawed dragon, both rising up from turbulent green waves amongst clusters of clouds and flaming pearls, the domed cover with an everted rim divided into six lobes, similarly decorated with two leaping dragons amongst scrolling clouds and flaming pearls, bordered by finely painted crashing blue waves at the rim, the base of the vessel inscribed in underglaze blue with a three-column mark within a double circle.

Note: This bowl is remarkable for its powerful motif of ferocious five-clawed dragons writhing their sinuous bodies above tumultuous waves. Bowls of this form, with steeply flaring sides to accommodate a similarly-shaped cover were an innovation of the Yongzheng reign and have been attributed to the early years of his reign. Bowls of this type are discussed by Peter Y.K. Lam in ‘Lang Tingji (1663-1715) and the Porcelain of the Late Kangxi Period’, Transactions of the Oriental Ceramic Society, vol. 68, 2002-2003, p. 44, where he suggests that wares inscribed with a reign mark that features the character qing (great) with the yue (moon) radical written with a vertical line, instead of a horizontal line, as on this piece, were made not long after the death of the Kangxi Emperor (1662-1722).

Bowls of this type are held in important Museums and private collections worldwide; a closely related pair of bowls in the Palace Museum, Beijing, is illustrated in Qing Porcelain from the Palace Museum Collection. Kangxi, Yongzheng, Qianlong, Hong Kong, 1989, pl. 30; another two in the Nanjing Museum were included in the Chinese University of Hong Kong exhibition Qing Imperial Porcelain of the Kangxi, Yongzheng and Qianlong Reigns, Hong Kong, 1995, cat. no. 52; a single bowl is illustrated in Chinese Ceramics in the Avery Brundage Collection, San Francisco, 1967, pl. LXXIII (C); and another from the Aykroyd collection, illustrated in Soame Jenyns, Later Chinese Porcelain, London, 1951, pl. XCIV, fig. 3, was sold in our London rooms, 17th May 1966, lot 230.