The Frist Art Museum presents J.M.W. Turner: Quest for the Sublime, an exhibition of extraordinary oil paintings, luminous watercolors, and evocative sketches by Joseph Mallord William Turner (1775–1851), a central figure in the Romantic movement widely recognized as Britain’s greatest painter and among the most highly regarded landscape painters in Western art. Selected from Tate’s Turner Bequest and organized in cooperation with Tate, the exhibition will make its sole U.S. appearance at the Frist from February 20 through May 31, 2020.

Long admired for his ingenuity, originality, and passion, Turner strove to convey human moods and the feeling of awe aroused by nature’s immensity and power—its palpable atmospheres, pulsating energy, the drama of storms and disasters, and the transcendent effect of pure light. With approximately 75 works, the exhibition conveys highlights in the British painter’s career from the 1790s to the late 1840s, from dizzying mountain scenes and stormy seascapes to epic history paintings and mysterious views of Venice. The Romantic movement of the late 18th- through mid-19th centuries arose in response to the Enlightenment emphasis on reason over emotion. “For Turner, psychological expression and the liberation of the imagination were of paramount importance,” says David Blayney Brown, senior curator, 19th-century British art, Tate Britain. “He achieved these goals in images of the landscape that evoked human moods by portraying extreme contrasts of intense light and gloomy clouds, dramatic topographies, and energetic brushstrokes.”

Turner portrays climatic events not only as compelling forces by themselves, but also as settings and metaphor for historical and modern dramas. “Mountains and sea show the world in motion: the glacial creep of geological change in the Alps, the sudden fall of a rock propelled by an avalanche, the changing appearance of Mont Rigi according to time and weather, the swell and heave of the sea,” says Brown. Societal and technological changes are captured as well, with images of steamships and other suggestions of industry signaling the forthcoming machine age. The exhibition also includes elemental images of sea and sky, painted late in Turner’s life, which appear nearly abstract. The concept of the Sublime was central to Romanticism. “As industrialization progressed, people gradually began to develop a longing for the awe-inspiring power and beauty of untouched nature and natural forces. Turner was able to cater to this interest in his landscape paintings,” says Brown.

Organized thematically, the exhibition begins by examining Turner’s early aptitude at landscape painting while attending the Royal Academy Schools. Works in the section show his masterly adaptation of early influences and the first instances of what would become a lifelong habit of summer touring across Europe to make sketches and studies, which he would later make into studio paintings. The next sections include Turner’s first impressions of the mountains, glaciers, and lakes of the Swiss Alps. “Turner’s early scenes of Switzerland and Italy are often somber or stormy in mood and coloring, reflecting a region that was as unstable politically as it was in its geology and climate,” says Brown. “In later works, he communicates a sense of rapture and harmony that may be related to the return of peace to Europe after the Napoleonic Wars.”

Other sections provide insight into Turner’s process and working methods by exploring sketchbook studies, works in progress, and watercolors at various stages of completion. The exhibition concludes with a section devoted to Turner’s fascination with the sea. “As time passes, there is a progression from a more substantial, three-dimensional style to one that is more impressionistic and less solid,” says Brown. “In these often-unfinished paintings, Turner stripped away subject and narrative to capture the pure energy of air, light, and water.” 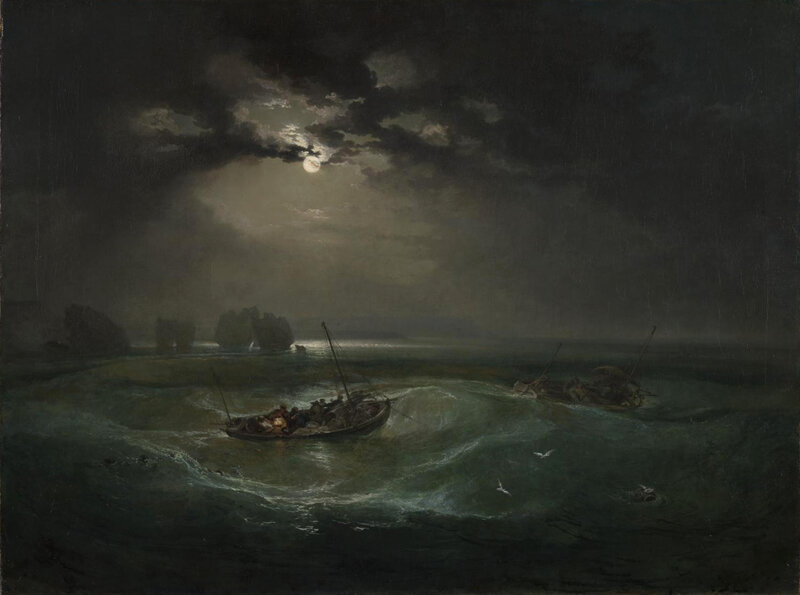