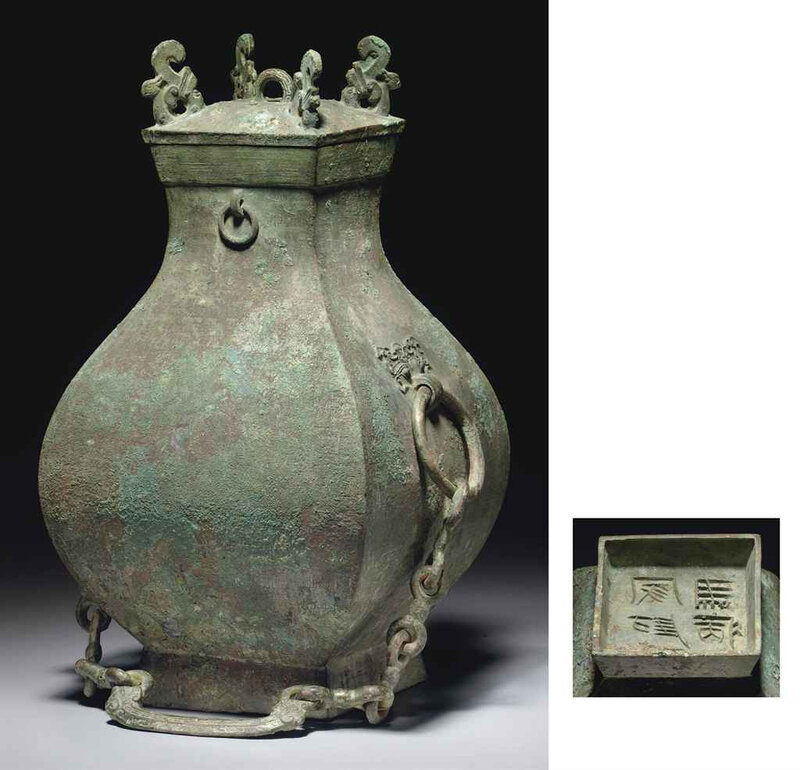 The faceted pear-shaped body raised on a slightly flared foot, the sides left plain, with small loops suspending rings on two sides below the rim, and relief-cast taotie mask handles suspending loose rings applied on the shoulder of the other two sides, the rings attached to links attached at the other end to a slightly arched handle cast with bands of cowrie pattern between the dragon head terminals, the cover with canted sides and applied with bird-scroll finials at the corners and a ring handle on top, with a four-character inscription cast in relief on the base, with brown and milky green patina and blue-green encrustation, stand.

Note: The meaning of the inscription cast in relief on the base of this vessel, ma bing yi jia xiong li, is unclear, but may be literally translated as, 'horse, sickness, family, hero.'

The addition of the relief inscription on the base of this vessel is an unusual feature, but can be found on other bronze vessels of Han date, such as the hu in the Palace Museum, Beijing, which is cast in relief on its base with a nine-character inscription in seal script reading, "happiness comes with drinking wine and eating". See The Complete Collection of Treasures of the Palace Museum - 28 - Bronze Articles for Daily Use, Hong Kong, 2006, pp. 62-3, no. 54. Compare, also, the bronze hu excavated in 1961 in Gaoyao Village, Shaanxi province, which is cast in relief on one side with an inscription in seal script reading, jiu jiang gong (Nine river offering), illustrated in Zhongguo Qingtongqi Quanji - 12 - Qin Han, Beijing, 1998, p. 67, no. 65.