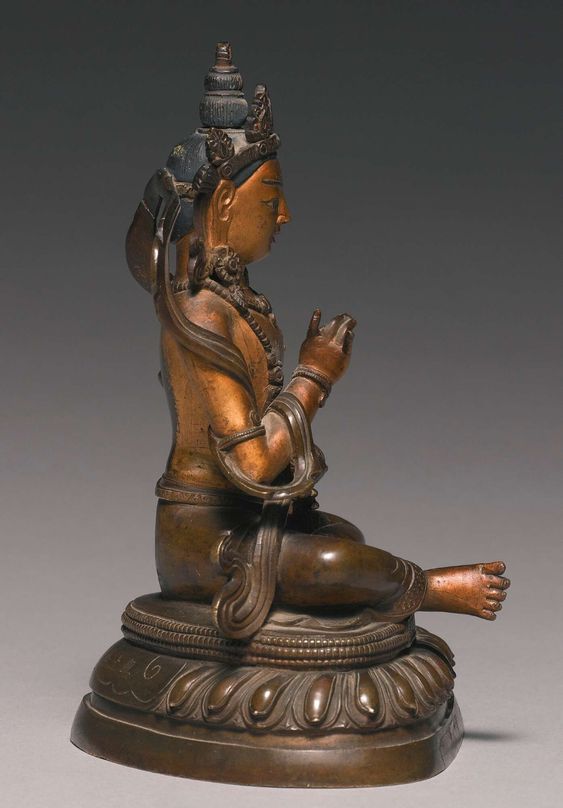 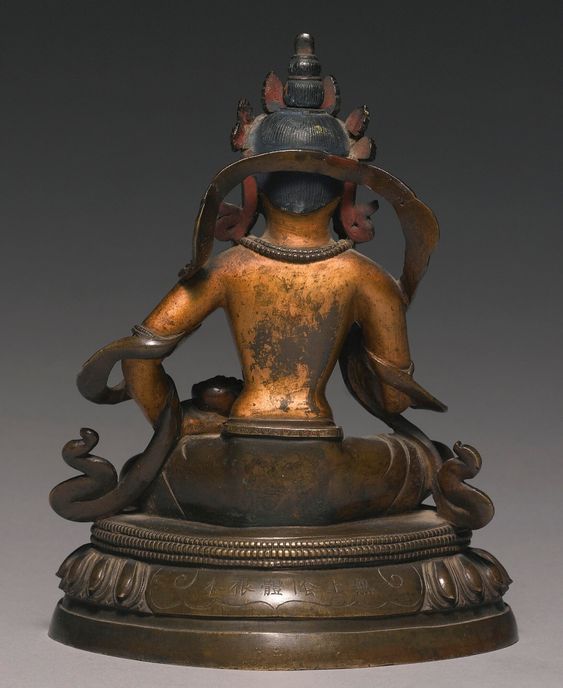 seated atop a lotus pedestal, holding a skullcup in the left hand, the right posed to hold a now-missing attribute, wearing a flowing dhoti with chased borders, a fluttering scarf, jewelry, and a five-leafed crown fronting a tiered topknot surmounted by a flaming jewel, the flesh areas cold gilded, the hair and face detailed in pigments, the reign mark reading Da Qing Qianlong nian jing zuo cast in relief in a cartouche on the front of the pedestal within a triple beaded border, the characters, Diaheitian, identifying the figure as Mahakala engraved above the lower edge, the back of the lotus base engraved wushang yin ti gen ben, the base sealed with a copper plate base engraved with a double vajra, silk and cardboard stand (2).

Note:The inscription above the lower edge, Daheitian, identifies the figure as Mahakala, whose name literally means the Great Black. Black in this case is figurative rather than descriptive and refers to the nature of Mahakala. Just as blackness indicates the absence or complete absorption of light, so too does Mahakala's nature reject and absorb all form and substance, leading to ultimate reality.

Mahakala has many forms and diverse functions, which are dictated by the needs and abilities of devotees. To initiated practitioners he appears in esoteric, wrathful forms. To lay devotees, he takes more human forms as portrayed in the present lot. Two handed depictions of Mahakala often depict the deity holding the skull cup and either a cutter or a sword. In the case of the present lot, the missing attribute is likely a cutter, due to the angle that the hand is held.

The Qianlong emperor was a devoted Buddhist and a keen follower of Tibetan Lamaist teachings. He had bronze figures of the Tibetan Buddhist Pantheon made in the Palace Workshop to be enshrined in the numerous Buddhist halls built within the Forbidden City, such as the Baoxianglou and the Fanhualou.