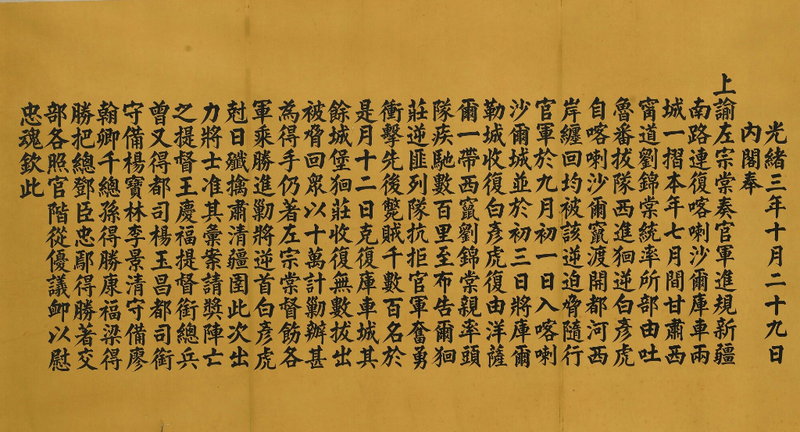 depicting the victorious Qing army firing on and in pursuit of turbaned rebels along the banks of the Ili River, with foothills and habitations in the background, the leading commanders identified by name with cartouches beside their likenesses, including Sun Desheng, Liu Jintang, Liao Hanqing, Deng Chenzhong, Zeng Youde and Yang Baochang; together with an unmounted colophon bearing the date 3rd year of the reign of Guangxu, corresponding to 1877 (2).

Provenance: Acquired in Denmark, circa 1960.

Note: This impressive painting belongs to a set of seventeen paintings depicting commemorative battle scenes between the Qing Imperial Army and the rebel forces of the Muslim Rebellion in the northwest of China from 1862 to 1877. In 1875, the first year of Guangxu’s reign, Zuo Zongtang was appointed as imperial commissioner to supervise military operations in Xinjiang. At the end of spring 1876, Zuo rode out towards Suzhou, leading his army towards Xinjiang. His military strategy was to ‘seize the north then take the south’, first recapturing northern Xinjiang before moving south. At the end of spring 1877, the Qing general Liu Jintang led his forces from Urumqi and mounted an assault on Turfan, thus destroying Agbor’s royal power. General Liu’s detachment entered the hinterland of southern Xinjiang, recapturing the four towns of Korla, Baicheng (Bay), Aksu and Wushi (Uqturpan) at the end of the summer of 1877, and by the beginning of February 1878, the Qing army had reoccupied all of Kashghar, Yerqiang (Kargilik), Yengi Hisar and Khotan (see Chahryay Adle et. al. (eds), Towards the Contemporary Period: From the Mid-Nineteenth to the End of the Twentieth Century, Paris, 2005, pp 381-82). This painting appears to depict the fifteenth scene of this series, in which General Liu Jintang (1844-94) led his troops across southern Xinjiang and drove the Muslim rebels westward while taking thousands of prisoners.

Only a small number of paintings from the series of the Muslim Rebellion in the Northwest are known to be held in collections. Among them is one thought to depict the battle at the Wei River, now in the Royal Collection at Sandringham House, Norfolk, United Kingdom, illustrated in Hongxing Zhang, 'Studies in Late Qing Dynasty Battle Paintings', Artibus Asiae, Vol. LX, no. 2, fig. 4; a scene possibly illustrating the Pingliangfu battle, from the Mactaggart Art collection, in the University of Alberta Museums, Alberta, accession no. 2004.19.92; and another painting portraying either the Pingliangfu or Heichengze battle, sold in these rooms, 15th September 2010, lot 367.

According to Hongxing Zhang, Towards the Contemporary Period: From the Mid-Nineteenth to the End of the Twentieth Century, op. cit., in 1885 the Guangxu emperor initiated a painting project to commemorate the government victory over the three major rebellions of the nineteenth century, the Taiping Rebellion, the Nian Rebellion and the Muslim Rebellions. Qingkuan (1848-1927), Director of the Three Agencies in the Neiwufu (Imperial Household Department), was appointed as director of this major imperial art project. A total of sixty-seven paintings were created, comprising twenty for the Taiping War, eighteen for the Nian Rebellion, twelve for the Muslim rebellion in Yunnan and Guizhou, and seventeen for the Muslim rebellion in the northwestern regions. The project was completed in 1890 and the paintings were displayed in the Ziguangge ('Hall of Purple Splendor'), located west of the Forbidden City in Beijing, where under the Qianlong emperor, banners and portraits of meritorious officers as well as battle scenes were shown.

Of the original set of sixty-seven paintings, only a few have survived. The only complete set of twelve paintings depicting scenes of the Muslim Rebellion in Yunnan and Guizhou are in the Palace Museum in Beijing, of which only one is published, see Hongxing Zhang, op.cit., fig. 5. Three other paintings from the series commemorating victorious battle scenes between the Imperial army and the forces of the Taiping Heavenly Army are known, one sold at Christie's London, 22nd April 1991, lot 101, two in our Hong Kong rooms, 9th October 2007, lot 1312, and 8th October 2009, lot 1660. Another was sold in these rooms 23rd March 2011, lot 637.