PURCHASE, NY.- Pier Paolo Pasolini (Italian, 1922–1975), one of 20th century Europe’s leading intellectuals, known for his prolific work as a poet, writer, and film director, and who railed against government corruption, materialism, consumerism, and political and social repression, is the focus of Pier Paolo Pasolini: Subversive Prophet, an important exhibition showcasing the artist’s wide range of work and influence that is on view at the Neuberger Museum of Art, Purchase College, SUNY, from February 12 through May 31, 2020.

A blunt and controversial figure, Pasolini often faced harsh rebuke. His unrelenting critiques of materialist values, the bourgeoisie and its institutions, and the destruction of Italy’s culture and traditions, were carried by media outlets, earning him an international reputation as a leading public intellectual. He championed the disinherited and viewed the intellectual as a savior of society. “Outspoken and subversive, Pasolini made no concessions to anyone and often deliberately enraged those in power,” comments Patrice Giasson, Alex Gordon Curator of Art of the Americas. “Yet, Pasolini left three decades of amazing artistic production full of complex and rich themes that are as relevant today as they were then. The goal of this exhibition is to give American audiences the chance to discover his work. As of now, he is best known in intellectual and cinephile circles.”

Excellent examples of that output are contained in the Neuberger Museum’s two-part exhibition, which opens with an exploration of Pasolini’s reception in the Americas (Brazil, Argentina, Mexico and the United States). According to Paula Halperin, Purchase College Associate Professor of Latin American History and Chair, Film and Media Studies, Pasolini’s film work resonated as it addressed similar concerns of the Brazilian cinema of the 60s and 70s, “addressing themes of ‘center and periphery,’ the urban and the rural, [and] the First and the Third worlds, all unavoidable tropes in Latin American political cinema.” In the exhibition, homages to Pasolini by two Latin American artists: the Chilean, New York–based artist Alfredo Jaar, artist, architect, and filmmaker who loaned six works to the exhibition, including his short cinematic tribute to Pasolini; and the late Antonio Frasconi, whose artist’s book In Memoriam, Pier Paolo Pasolini: Una Disperata Vitalitá explores the artist’s tragic death. The book includes woodcut images and fragments of articles (1975) that carried news of Pasolini’s death. In the 1960s, Pasolini twice visited the United States and met with countercultural and political activists, including university students and members of the Black Panther movement. He also sat for Richard Avedon, who created a series of portraits of Pasolini (Avedon was fascinated by countercultural figures like Pasolini, Jack Kerouac, and Allen Ginsberg,) The artist was inspired and encouraged by his first visit to New York in 1966. In an interview with Oriana Fallaci, he declared: “In Europe, everything is finished. In America, one has the sense that everything is about to begin.” To the late Susan Sontag, American writer, filmmaker, philosopher, and political activist, Pasolini was “indisputably the most remarkable figure to have emerged in Italian arts and letters since the Second World War. Whatever he did once he did it had the quality of seeming necessary.” Also on view are a series of remarkable black and white images by Duilio Pallottelli, the photographer who accompanied Pasolini during his first trip to New York in 1966. The second part of the exhibition is devoted to Pasolini’s powerful creativity and features his poetry, novels, paintings, drawings, and films. The artist’s drawings and sketches, several examples of which are reproduced for the exhibition, are precious testimonies of the people he admired. Giasson points out that Pasolini had a powerfully discerning eye. “He studied art history in Bologna and this really had an impact on his filming.” There are obvious references to Andrea Mantegna’s “Dead Christ” in Il Decameron, one of Pasolini’s 12 films, Piero della Francesca and other Renaissance painters in The Gospel According to Matthew (1964). “He imparted a fundamentally painterly sensibility to his films from the start: aiming as much to frame a new sense of the sacred as to assail form or upend convention.” (Ara H. Merjian, Art in America) Pasolini carefully chose the settings of his films and traveled the world over, not just to understand different cultures better, but to find the landscapes appropriate for the subject matter he covered. Eleven costumes for Pasolini’s theatrical ventures, designed in Rome by Danilo Donati for Farani, including the one used by Pasolini in The Canterbury Tales, also are showcased. Pasolini’s voice was forged during the rise of Fascism and Communism in the 1930s, the war years, and post-war upheaval. Specifically, he addressed what he viewed as the universal homogenization of society, the dangers of capitalism and excessive consumption, the growing inequality between poor and rich, and hypocrisy and repression in social and political spheres. But with it all, Pasolini remained a poet. In an essay dedicated to the language of cinema, in which he recalls the importance of semiotics in the making of films, he concludes that, for him, “the language of cinema is fundamentally a ‘language of poetry.’

“To me, Pasolini was a subversive prophet, a civic poet, a barometer,” says Giasson. “He could talk about everything, including about the ways we behave, our sexuality, and our political inclinations. With Pasolini, nothing was off the table. He also understood and railed against the way Italy and the rest of the Western world were heading – into a uniform, universal, standardized society – even before the idea of globalization took hold. My hope is that through this exhibition, visitors will connect with the voice of a true humanist, who dedicated his life to making this world a better place in which to live.” Left: a costume from the movie "The Gospel According to St. Matthew". Right: Piero della Francesca. Fragment of a fresco from the series "Legend of the True Cross" (Arezzo). Courtesy Farani Sartoria Teatrale. 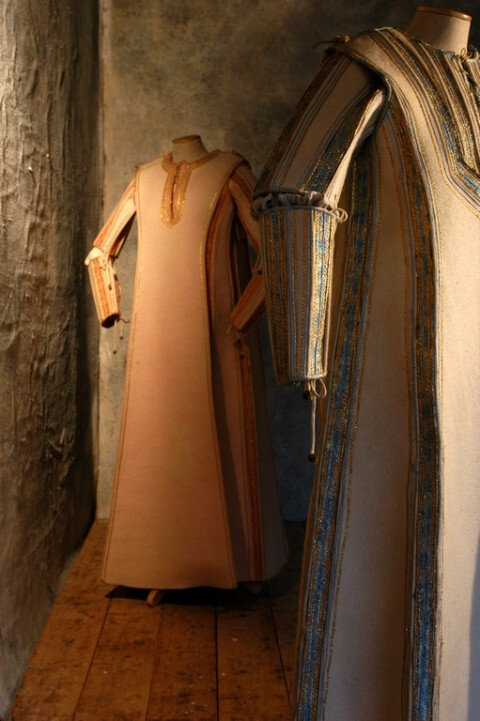