Perugia -  From 7 March to 7 June 2020, the National Gallery of Umbria in Perugia will be the scene of an exceptional exhibition event.

For the first time there will be a large monographic dedicated to Taddeo di Bartolo (c. 1362 - 1422) , one of the most significant artistic presences of the time, at home and beyond. As a real itinerant teacher, in fact, he spent a good part of his career moving between Tuscany, Liguria, Umbria, and Lazio at the service of politically and economically powerful families, public authorities, large religious orders and brotherhoods. The exhibition, curated by Gail E. Solberg, the most accredited scholar of the painter, will present 100 panels by the Sienese painter , able to reconstruct his entire artistic parable, from the late eighties of the fourteenth century until 1420-22, with loans coming from prestigious international museums, such as the Louvre in Paris and the Szépművészeti Múzeum in Budapest, and with the decisive collaboration of Italian institutions and institutes.

Taddeo di Bartolo was the greatest polyptych master of his time. The review will therefore give particular emphasis to this sacred art form, thanks to the presence of complete blades and disassembled tables which, placed side by side, will allow the complexes to belong to for the first time. For the occasion, in an environment that will recreate the interior of a Franciscan classroom church, the imposing figurative apparatus of the now dismembered altarpiece of San Francesco al Prato in Perugia will be reconstructed, of which the National Gallery of Umbria preserves 13 elements. To these will be added the missing parts, so far identified, such as the seven panels of the predella depicting Stories of St. Francis , preserved between the Landesmuseum in Hannover (Germany) and the Kasteel Huis Berg in s'-Heerenberg (Netherlands), and the small San Sebastiano del Museo di Capodimonte in Naples, which probably decorated one of the pylons of the carpentry.

From the Ducal Palace of Gubbio come the eight tablets, painted in tempera on a gold background with figures of Saints, originally belonging to the polyptych of the Eugubina church of San Domenico. These works by Taddeo di Bartolo were recently acquired by MiBACT, which exercised the right of first refusal, recognizing in them an exceptional historical-artistic interest, thus returning them to the cultural heritage of the city. The exhibition also documents other types of works, such as processional banners or small tables of private devotion, allowing for a more complete reconstruction of its catalog.

It is therefore a complete overview of Taddeo's art, from the first signed and dated work - to which the Annunciation of the KODE Museum in Bergen (Norway) (1389) belonged - to the Madonna Avvocataof the Museum of Sacred Art of Orte (VT), from 1420, passing through capital tests of his career such as the polyptych of Montepulciano, of which the three cusps are exposed, and the imposing polyptych of the Pinacoteca di Volterra (PI). 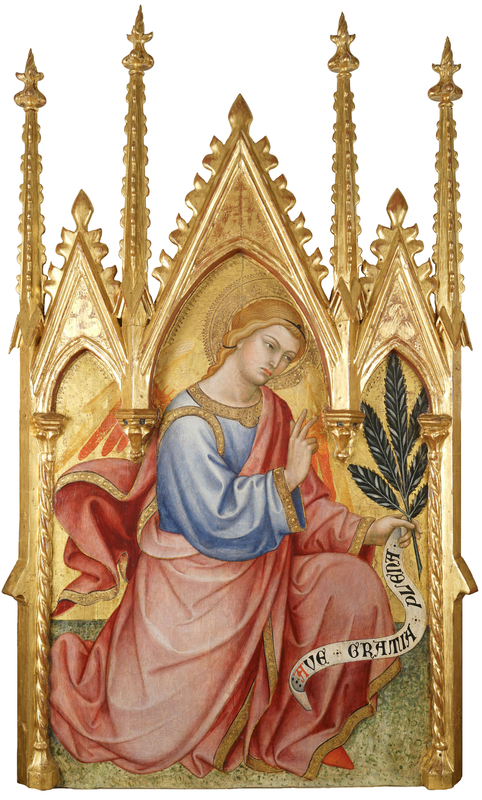 Taddeo di Bartolo (c. 1362 - 1422), Archangel Gabriel, cusp of the polyptych of 1401, Chapter of the Cathedral of Montepulciano. Photo by Mario Verdelli.

The route, divided into seven sections, opens with the first work signed and dated by Taddeo: the Collegalli polyptych from 1389, present through two cusps on loan from the Norwegian museum, which is flanked by the central compartment of the work carried out around 1390 for San Miniato. These works trace a path that progressively moves away from Siena to the north, along the Via Francigena and documents an increasingly important tour of commissions outside the Sienese walls.

The second chapter is dedicated to the nineties of the fourteenth century, a decade that saw Taddeo leave Siena to travel to Florence, Lucca, Liguria, up to Pisa which he reached around 1395. The space dedicated to the Pisan works counts, compared to the other sections of the exhibition, the greatest number of reconstructed altarpieces, among which the two Madonnas stand out, meeting for the first time in two centuries with the lateral saints kept in Pisa. Taddeo di Bartolo (c. 1362 - 1422), Virgin of the Annunciation, cusp of the polyptych of 1401, Chapter of the Cathedral of Montepulciano. Photo by Mario Verdelli.

The important activity of Taddeo di Bartolo as a fresco is illustrated by a 3D video reconstruction of the frescoes of Palazzo Pubblico, part of a rich multimedia system which aims to document the restorations and diagnostic investigations carried out on the occasion of the exhibition, thanks to the contribution of the National Gallery of Umbria, and to illustrate the very high technical and stylistic quality of the production of this great master.

In this section, next to the cusps of the 1401 triptych of Montepulciano, there is a series of tables documenting the production of his workshop in his Sienese five-year period, including a complete Marian triptych from 1400-1405 intended for a lay brotherhood, as well as paintings from polyptychs destined for noble altars in Augustinian, serviced and Dominican churches.

In the oldest polyptychs, the narrative played a fundamental role, often told in the predella. In Siena, however, it was not uncommon to read a story in the main camp. The example of the Majesty of Duccio and of the triptychs of Simone Martini, of the Lorenzetti brothers and of Bartolomeo Bulgarini, did not leave Taddeo indifferent to the point of inspiring him in the creation of the Nativity of 1404 and of theAnnunciation of 1409, works intended for the city altars. The itinerary documents his creative phase, presenting the elements belonging to the two Sienese triptychs, together with the magnificent Pentecost of 1403 for Perugia which reveal a painter ready to surprise the spectators by upsetting their expectations. From this we deduce that, when he had the opportunity to paint a complex narrative scene, Taddeo distinguished himself by making some of his best works. These stories released him from the need to repeat the canonical subjects required by most customers, unleashing his imagination. From the center of the exhibition, represented by the Franciscan polyptych of Perugia, we will reach the section where the innovative elements that Taddeo introduced in his works are proposed; during his career, the Sienese artist never stopped renewing the most used subjects, both from a technical and an expressive point of view. An evident case is the Madonna and Child which presents evident modifications, when one looks at that of 1390 for San Miniato, that of 1403 for Perugia or that of 1411 for Volterra. At the turn of the 1400, moreover, in the figures painted by Taddeo, there is a marked increase in the volume of weight. Fleshy characters who make their appearance in the cusps of Montepulciano in 1401 migrate to Pentecostof 1403 and continue to mature in the following years. The charm of the late Madonnas lies in a well thought out change of style; they are read as the first words of a new language that others would have tried to learn during the fifteenth century.

The exhibition ends with the painted wooden statue of the Madonna del Magnificat , in fact, the last work in which Taddeo di Bartolo participated.

As is now customary in the Gallery, on the occasion of the exhibition an ad hoc publication will also be made for the public of the little ones, a story-tale about Taddeo written by Carla Scagliosi, art official of the Gallery, illustrated by the designer Chiara Galletti and edited by Aguaplano. 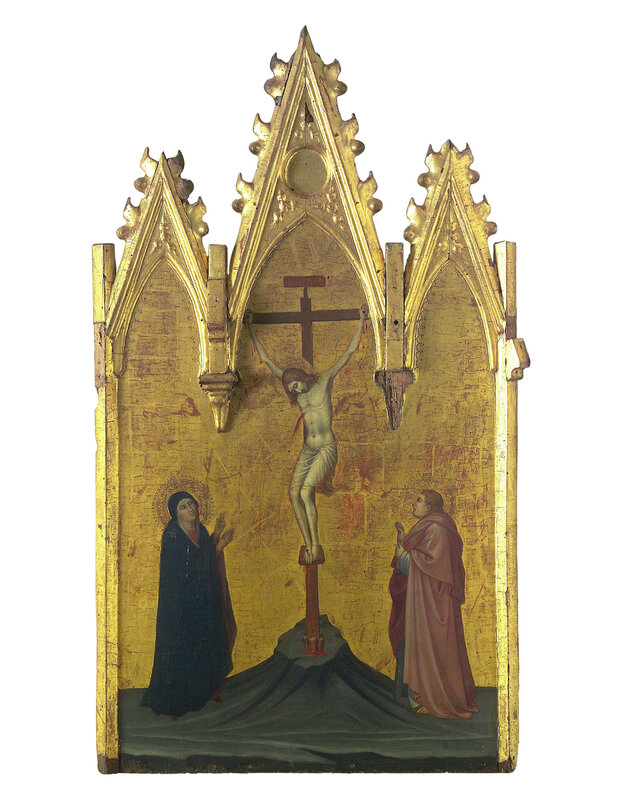 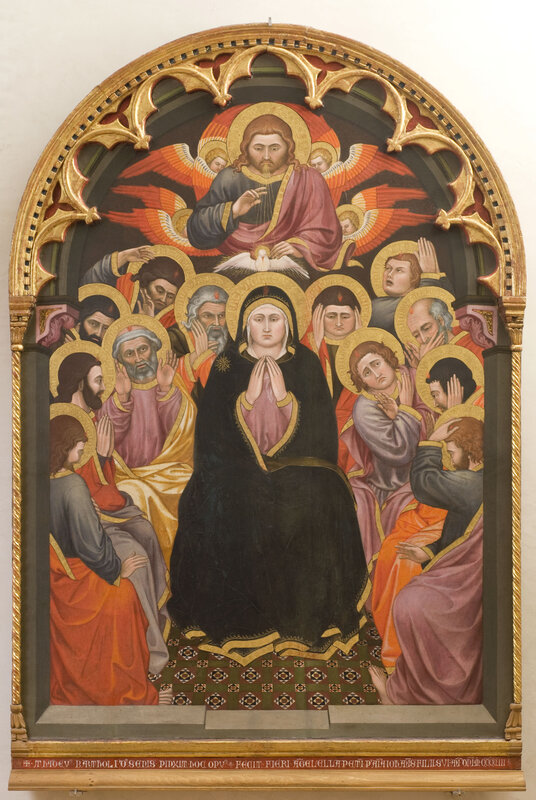