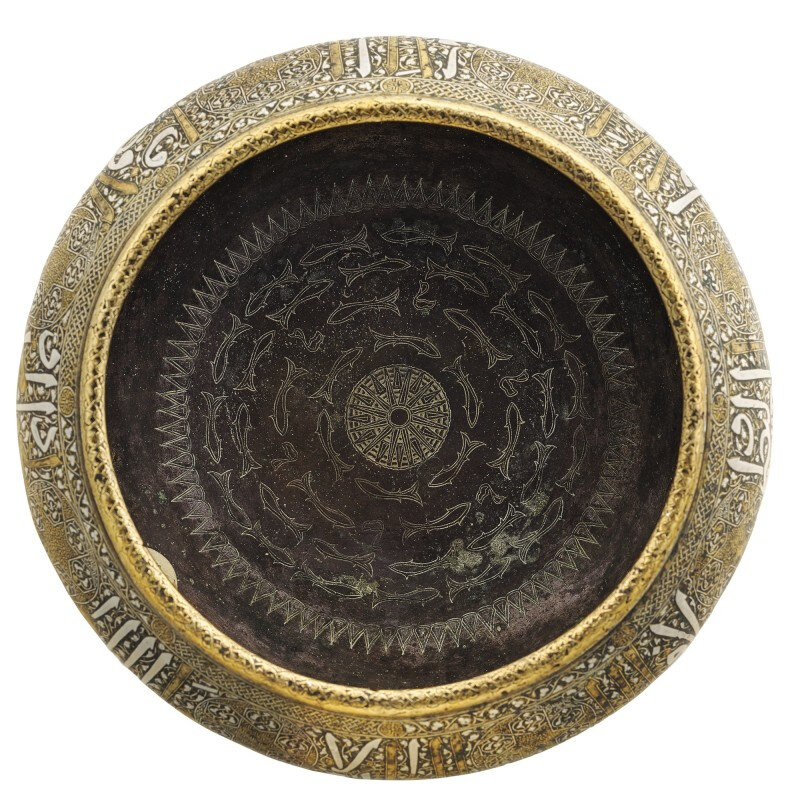 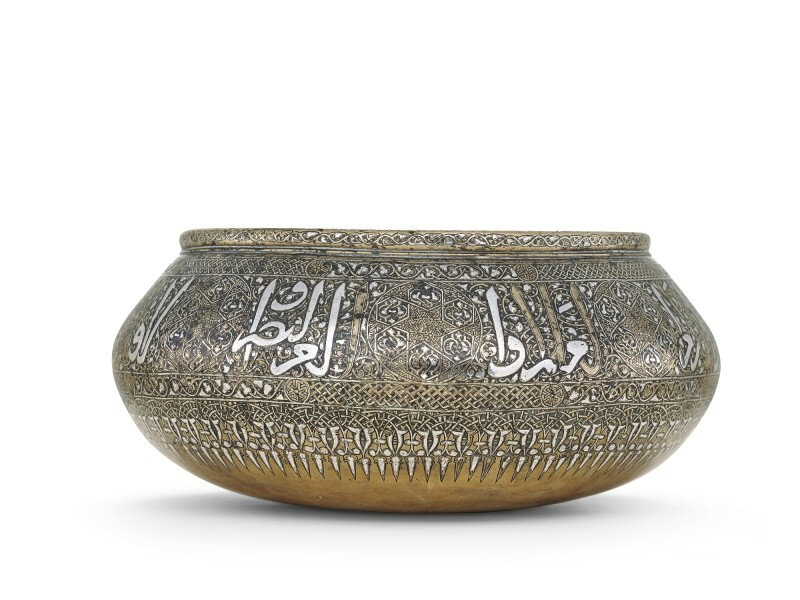 finely inlaid with silver, incised with benedictory words around the body against scrolling foliage, interspersed with roundels containing a geometric star with further abstract and foliate designs, the interior engraved with fish and ducks swimming around a sun, two old collector's labels 'Sotheby's' and '173' and '166'.

Note: For Persian metalworkers producing objects for the court and the wealthy elite during the fourteenth century, surface embellishment was of primary concern. Drawing upon the technology of their predecessors to inlay brass with elegant silver and gold decoration, artists deployed a captivating repertoire of inscriptions, geometric and floral decorations, figural compositions, and imperial and solar symbols that prompt the viewer to search for meanings. The high-quality workmanship, harmonious use of silver, copper and gold, and iconographical motifs like geometric roundels, lotus blossoms and compositions radiating from central stars which were adopted by Persian craftsman during this period can be linked to the legacy of Mamluk metalworkers, whose influence survived well into the seventeenth century.

One symbol which became prevalent in this period that can be found on the present bowl’s splendid exterior are the stars embedded within the hexagonal arabesque panels interrupting the inscription. These stellar motifs are complimented by a central sun radiating from the core of the bowl’s interior. Such cosmic elements, it has been suggested, symbolise the divine light in the heavens or in the sky (Atil 1985, p.159). The symbolism is highlighted during the use of the bowl: when liquid is poured in, the celestial light in the water becomes visually evident; when the bowl is tilted during use, the image of the sun in the heavens is fully exposed to the observers. In this instance, the artist has emphasised the conceit by engulfing the sun with fish swimming clockwise and counterclockwise, representing the solar body’s manifestation in the water. Similar examples are in the collections of the Freer|Sackler Gallery in Washington D.C. and the Victoria and Albert Museum (Atil 1985, no.20; Melikian-Chirvani 1982, nos.96-97).

Beyond pictorial messages, artists also invested metalwork with meaning through epigraphy. Within the meandering leafy vine and plaited motifs adorning the exterior of the present work, a band of elongated naskh calligraphy advertises the bowl’s benedictory function. As the vessel is rotated, the educated reader is presented with a lapidary list of virtues, including ‘Glory, victory, good fortune, grace, generosity, gratitude, nobility and knowledge’.