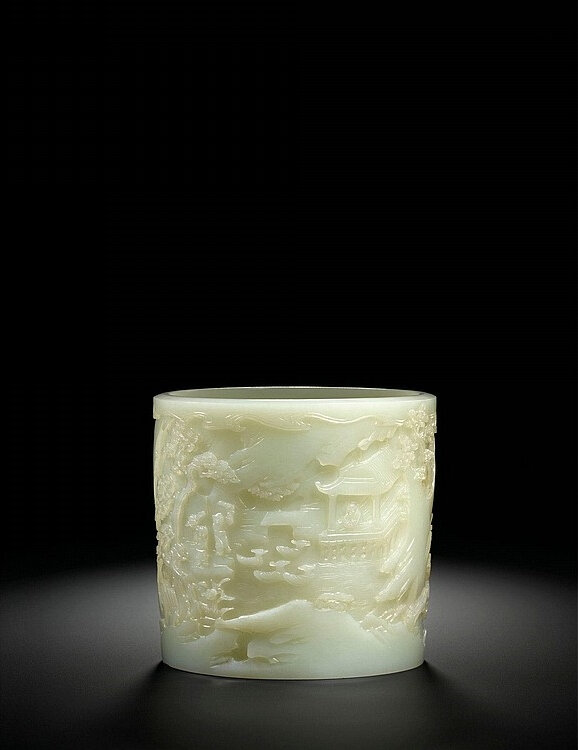 of cylindrical form the exterior meticulously carved in relief with a continuous landscape of scholar seated in a pavilion admiring the mandarin ducks in the pond, while two attendants on the other bank hold floral sprigs, the reverse with an immortal and his attendant strolling in the mountains, the lustrous stone of an even creamy white tone with natural inclusions, wood stand.

Note: The decoration of the present brushpot follows in the tradition of Chinese painting, by treating the surface of the material as a scroll work. With each turn of the brushpot the scene unfolds in front of the viewer, making it an object that can be appreciated from different sides. The technique of working in multiple layers was utilised in the creation of this piece which heightens the sense of depth and the detailing is meticulously executed and refined. Moreover, the broad areas of rocks which have been left uncarved provide a striking aesthetic contrast with the intricately modelled trees and figures as well as exhibiting the high quality of the stone.

White jade brushpots similarly depicting figures in an enchanting mountainous setting include a slightly smaller example in the National Palace Museum, Taipei, was included in the exhibition The Refined Taste of the Emperor: Special Exhibition of Archaic and Pictorial Jades of the Ch'ing Court, National Palace Museum, Taipei, 1997, cat. no. 60; another included in the exhibition A Romance of Jade from the De An Tang Collection, Palace Museum, Beijing, 2004, cat. no. 2; and a larger brushpot in the Victoria and Albert Museum, London, illustrated in Ming Wilson, Chinese Jades, London, 2004, pl. 64. Compare also a related brushpot of slightly smaller dimensions, but supported on three ruyi feet, in the Palace Museum, Beijing, published in The Complete Collection of Treasures of the Palace Museum. Jadeware (III), Hong Kong, 1995, pl. 167.