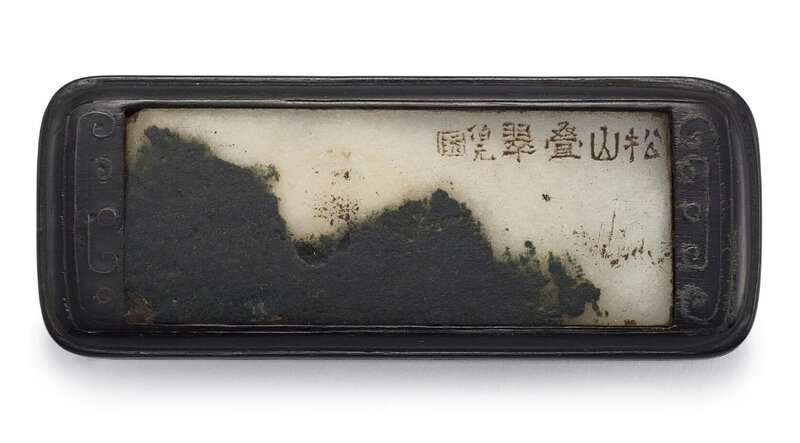 the rectangular wumu inkrest skilfully carved with rounded corners and resting on a splayed base atop four short bracket feet, the top of the inkrest decorated in silver inlay with scrollwork flanking an inset rectangular green and white dreamstone panel, the upper right corner of the dreamstone inscribed with a four-character inscription reading Songshan diecui ('Pine mountains in layers of jade-greenery'), signed Boyuan and followed by a seal mark reading Yuan.

Note: Ruan Yuan (1764-1849), zi Boyuan, who upon succeeding in the civil examination in the 54th year of the Qianlong reign (1789), was promoted to various prominent positions as a high official-literatus by the Qianlong Emperor in recognition of his education and talents, and continued to serve the court until the Daoguang period.

Ruan began collection painting stones (shihua) when he was governor-general of Yunnan-Guizhou (1826-1835) and acquired a marble quarry in Dali. When these stones were cut, polished, and inscribed, they were sent back to the Ruan family home in Yangzhou and an inventory comprising an annotate list of inscribed titles, physical descriptions and literary associations were kept by Ruan and his sons. The inventory was later published as Shihua ji [Record of Painting Stones] in five fascicles in Guangdong in the Xuehaitang congke [Sea of Learning Academy Collectanea] in 1877.

Although there is no exact record of a Songshan diecui painting stone in the inventory, the current dreamstone panel does bear striking similarities to one titled Wansong diecui (‘Myriad pines in layers of jade-greenery'), of which the description (vol. 2, p. 8) can be translated as follows:

The lower half is brook-green colour, and the mountains, covered all over in deep green colour and dotted to look like distant pines, appear as three rising and falling peaks.

Renowned for his discerning taste, Ruan was arguably one of the most celebrated collectors of literati works of art in the Qing dynasty, whose calligraphy was highly appreciated by the Qianlong Emperor; see a jade-inlaid couplet by Ruan Yuan installed at Yucuixuan (‘Bower of Purest Jade’) in Ningshougong (Palace of Tranquil Longevity), illustrated in A Lofty Retreat from the Red Dust: The Secret Garden of Emperor Qianlong, Hong Kong Museum of Art, Hong Kong, 2012, cat. no. 3.