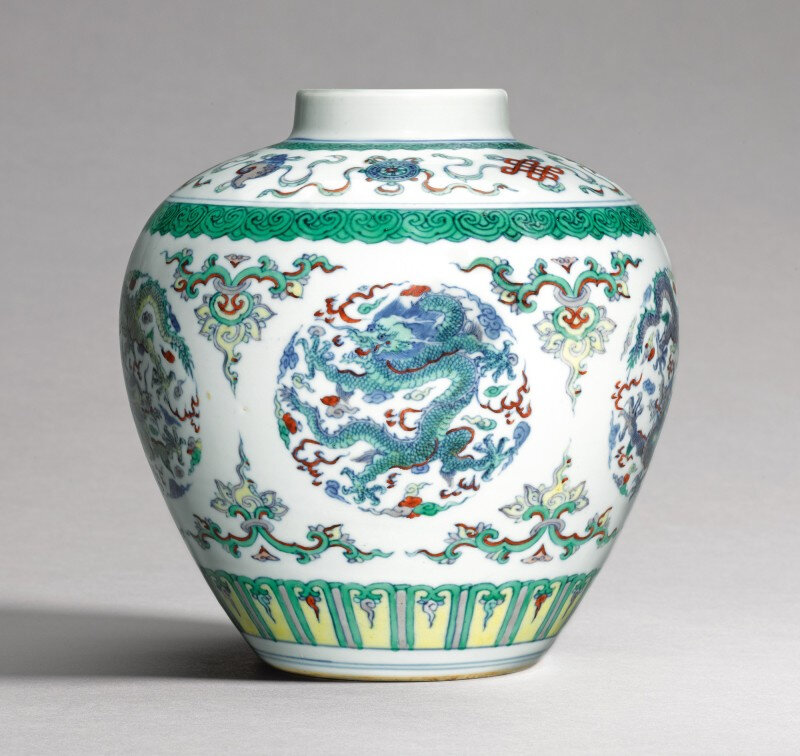 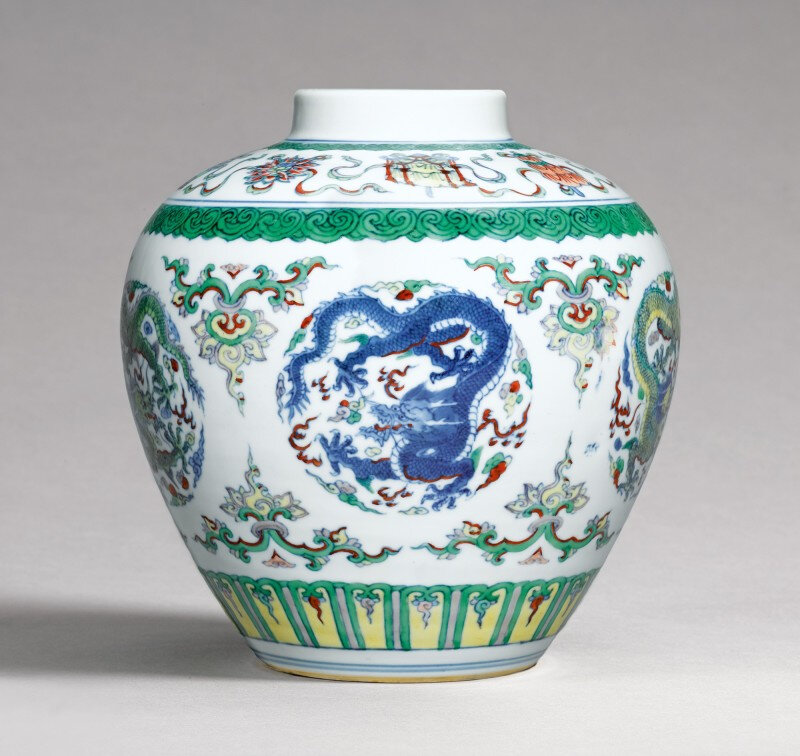 the finely potted ovoid body rising from a tapered foot to a rounded shoulder and an upright rim, painted around the exterior with five dragon medallions, each enclosing a five-clawed dragon writhing amongst cloud scrolls, its arm extended reaching for a flaming pearl, interspersed with clusters of multi-coloured cloud scrolls, all above a lappet border above the foot, the shoulder painted with bajixiang above a stylised cloud scroll in green enamel, the base inscribed with a six-character mark in underglaze blue.

Note: This jar is particularly notable for its delicately painted motif of dragon roundels in soft washes of coloured enamel outlined and detailed in cobalt. The motif and colour scheme draws from imperial porcelain of the Chenghua period (r. 1465-1487), adapted and reinterpreted in accordance to contemporary taste. A Yongzheng innovation is evident in the use of cobalt not only to delineate the different elements of the design but also to create texture and a sense of movement through the dragons’ fine network of scales and their manes.

Chenghua polychrome porcelain provided much inspiration to the potters active at the imperial kilns during the Yongzheng period as these early wares were particularly treasured by the emperor. An official record from 1732 lists 57 porcelain designs that were to be produced by the imperial kilns and mentions Chenghua polychrome porcelain among the most admired wares of the past. While masterpieces of the past were at times sent to Jingdezhen and used as models for direct copying, the most successful Yongzheng wares are contemporary interpretations of classic designs. This piece is such as creation: dragon roundels are known on Chenghua porcelain but are seldom found on jars, and the rendering of the dragons are characteristic of the Qing period.

Jars of this design are held in important museums and private collections worldwide; see a closely related jar from the collection of Sir Augustus Wollaston Franks, in the British Museum, London (accession no. Franks.338), illustrated in Sekai toji zhenshu/Ceramic Art of the World, vol. 15, Tokyo, 1983, pl. 195; another in the Victoria and Albert Museum, London (accession no. 605-1907), is illustrated in Gulland, Chinese Porcelain, London, 1911, pl. 670; and a further jar from the E.T. Chow collection was sold in these rooms in 1974, in our Hong Kong rooms in 1981, and again, 30th April 1996, lot 487. Jars painted with this motif continued to be produced in succeeding reigns, such as a jar and cover with Qianlong mark and of the period, in the Palace Museum, Beijing (accession no. 00154611), illustrated in The Complete Collection of Treasures of the Palace Museum. Porcelain in Polychrome and Contrasting Colours, Hong Kong, 1999, pl. 238. For a prototype of this form and design, see a Chenghua mark and period covered jar with floral roundels, from the Qing court collection and still in Beijing (accession no. 00115586), illustrated ibid., pl. 168; and a reconstructed cup with roundels of winged dragons, excavated from the Chenghua stratum at the waste heaps of the imperial kiln factory in Jingdezhen, included in the exhibition A Legacy of Chenghua. Imperial Porcelain from the Chenghua Reign Excavated from Zhushan, Jingdezhen, Tsui Museum of Art, Hong Kong, 1993, cat. no. C120.