BOSTON—Claude Monet (1840–1926) found extraordinary beauty in settings both mundane and majestic, and he shared that vision—that enthusiasm for the here and now—in paintings that changed the course of art. Perhaps no other artist has captured Boston’s imagination as enduringly as the beloved Impressionist master. On the occasion of its 150th anniversary, the Museum of Fine Arts, Boston (MFA), celebrates a great treasure of its collection with Monet and Boston: Lasting Impression, which offers a rare opportunity to see all 35 of the Museum’s oil paintings by Monet, among the largest and finest groups of the artist’s works in the world. On view together for the first time in a generation, they are joined by select loans from private collections and works from the MFA’s broader holdings, including 19th-century Japanese woodblock prints and European paintings that Monet admired and emulated. Presented at the MFA from November 15, 2020 through February 28, 2021, the exhibition charts the development of Monet’s incomparable vision and revolutionary technique, while also reflecting on Boston’s enduring commitment to the painter and his art.

“Monet’s paintings challenge us to take a sustained look at the world around us. Painted at a moment of deep industrial and scientific change, the works connect us to the natural world and the challenges to its preservation. Monet used new scientific theories to highlight new understanding of the ways we see color and light. On the occasion of the MFA’s 150th anniversary, we take great pride in recognizing our city’s and our Museum’s commitment to this incomparable artist,” said Matthew Teitelbaum, Ann and Graham Gund Director. “We began collecting Monet’s work in his lifetime and this commitment continues to this day. The MFA is a living museum, constantly connecting the past to the present.” Though Monet never traveled to Boston himself, the city’s appreciation for his art dates back to during his lifetime. Boston hosted the artist’s second American solo exhibition, local artists and collectors championed his work and when Monet died, in December 1926, the MFA organized a landmark memorial exhibition that opened just over a month later. The Museum’s own Monet collection was built predominantly through the generosity of local collectors, and many of the MFA’s paintings were brought to Boston during Monet’s lifetime; these stories of the early acquisitions and exhibitions are highlighted throughout Monet and Boston.

“By including Monet’s own words, as well as responses from artists, critics and gallerists who saw his paintings when they were new, I wanted to keep bringing it back to Monet’s lifetime—what people were seeing and saying then and how much that informs the ways we understand his work now,” said Katie Hanson, Associate Curator of European Paintings. “One of the great pleasures of organizing an exhibition is seeing familiar works in a different context that affords the opportunity to see them anew.” The MFA’s collection represents nearly the full span of Monet’s long career. Organized chronologically into four sections—Becoming Monet, Monet and Japonisme, Monet’s Normandy and Monet’s Magic—the exhibition traces that development of the artist’s painterly practice and showcases the range of his art and vision. Monet’s early works, such as Woodgatherers at the Edge of the Forest (about 1863), Rue de la Bavole, Honfleur (about 1864) and Ships in a Harbor (about 1873), are hung side by side with those of Jean-François Millet and Théodore Rousseau, Barbizon School painters whose rural scenes helped lay the groundwork for Impressionism, and marine painters Eugène Boudin and Johan Barthold Jongkind, whose advice he sought as he worked in Normandy. Monet’s early paintings are also joined by a recently acquired drawing, Dandy with a Small Cigar (about 1858), on view at the MFA for the first time. This witty caricature, which Monet made as a teenager, exemplifies the first works he sold as an artist and offers a poignant counterpoint to his later figural works such as Camille Monet and a Child in the Artist’s Garden in Argenteuil (1875), shown nearby. 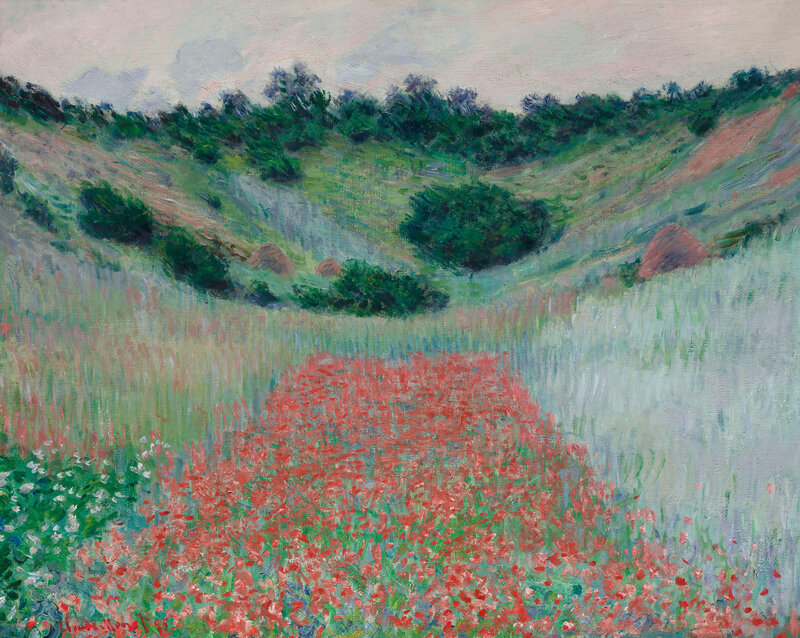 Drawing from the MFA’s global holdings, which include a renowned collection of Japanese art, the exhibition also places Monet’s work in conversation with ukiyo-e—woodblock prints that the artist himself collected and also saw in shops and exhibitions. By the early 1860s, after the forced opening of Japan to trade with the West in the previous decade, Japanese art, textiles, and decorative objects proliferated in Europe. At the 1867 International Exposition in Paris, the Japanese pavilion sparked even more widespread interest, and a handful of art dealers from Japan soon set up shop in the city. Many artists, including Monet, were profoundly influenced by the works and ideas from Japan they encountered—a complex phenomenon known, then as now, as Japonisme. In the exhibition, Monet’s large-scale painting La Japonaise (Camille Monet in Japanese Costume) (1876) is shown alongside a print by Tsukioka Yoshitoshi featuring the same narrative seen on the kimono in Monet’s painting. Additionally, paintings such as Flower Beds at Vétheuil (1881) and Seacoast at Trouville (1881) are shown alongside prints by Utagawa Hiroshige II (Shigenobu) and his distinguished teacher Utagawa Hiroshige I, demonstrating Monet’s emulation of both composition and color palette. 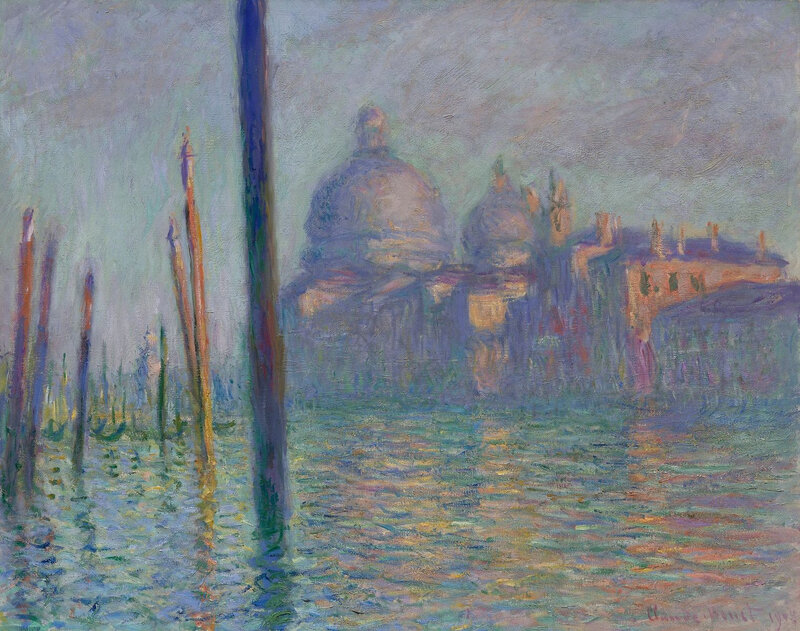 Paintings from the 1880s show Monet returning time and again to locations that were dear to him, whether to poppy fields and meadows within walking distance of his abode in Giverny or to the coastal waters and cliffs near Le Havre where he grew up. In Giverny, he received a steady stream of visitors, including Bostonians such as Lilla Cabot Perry, whose brother donated the canvas Meadow with Haystacks near Giverny (1885) to the MFA. A photograph Perry took during one such trip is on view in the exhibition, alongside a letter to Monet from John Singer Sargent, who also painted often in Giverny and facilitated American collectors’ access to the artist. Monet and Boston culminates with a section dedicated to Monet’s travels along the Mediterranean coast, where he was awed by what he described as the “fairylike air,” and with several pairs of canvases from his series paintings of the 1890s and beyond—including his Grainstacks, Rouen Cathedral and Water Lilies works, which rank among his inventive and beloved. Conceived, executed and often exhibited as a group, the individual paintings depict the given subject at various times of day, in changing weather conditions or in different seasons. The exhibition is accompanied by Monet: Paintings at the Museum of Fine Arts, Boston, a new book written by curator Katie Hanson and produced by MFA Publications that offers an overview of Monet’s acclaim in Boston during his own lifetime as well as individual entries for the MFA’s collection of paintings by the artist. Videos providing further insights from Hanson and Maureen Melton, Susan Morse Hilles Director of Libraries and Archives and Museum Historian, can be found on mfa.org. The exhibition webpage also features additional Monet-inspired content, including a virtual performance by Boston-based violinist Lilit Hartunian and a Spotify playlist compiled by songwriter and musician Barrie. Originally scheduled to open in April 2020 and delayed by the MFA’s temporary closure in response to the COVID-19 pandemic, Monet and Boston has been redesigned to be presented in the Museum’s spacious Linde Family Wing for Contemporary Art. The exhibition wall texts are freely accessible via the MFA’s new mobile app. Due to limited capacity, timed-entry exhibition tickets, which include general Museum admission, are required in advance for all visitors—members and nonmembers alike. Ticket reservations and an overview of the MFA’s safety protocols are available on mfa.org/visit. Member Preview Days will take place from November 11–14. 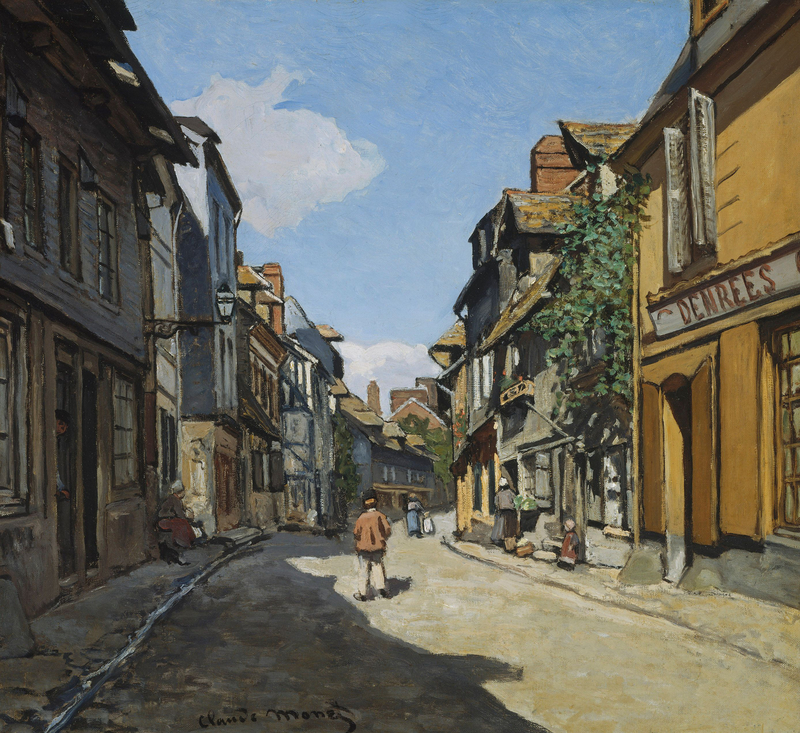