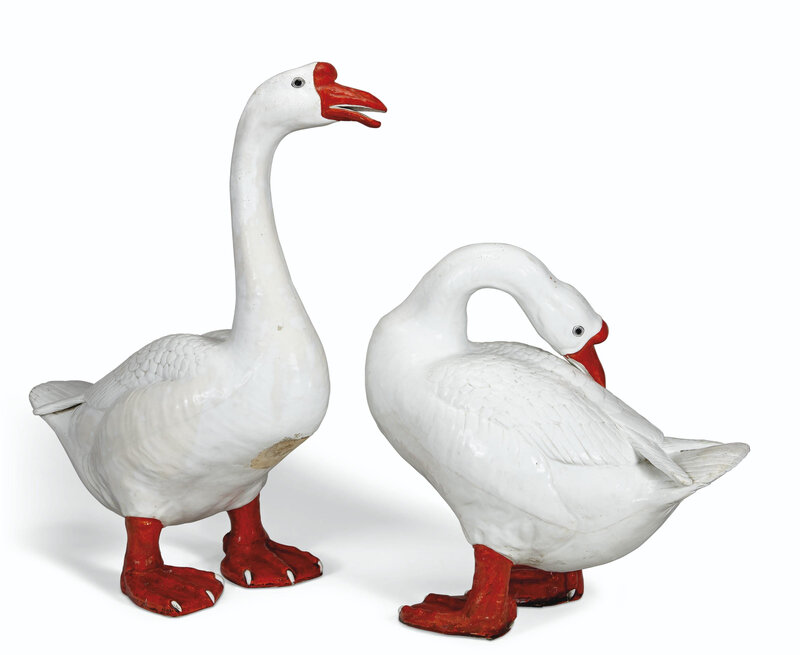 One standing with head held high on his long, slender neck, the other turned back, preening a wing, the plumage with molded details and the pebbly skin of their broad webbed feet glazed orange.

Note: In China geese are considered romantic, symbolizing loyalty and marital happiness. They are said to fly always in pairs and to mate for life, even remaining solitary if a mate dies. Flying geese are also believed to deliver good news, and mean the best of luck.
The heavy legs and feet and the horny knob on these birds' bills are characteristic of Chinese geese; geese are known in Chinese ceramics as early as the Han dynasty. The concept of very large porcelain models, however, may well have been inspired by the porcelain swans produced by Kändler at Meissen in the mid-18th century. On the underside are two circular unglazed patches where supports were applied; their open mouths were the only escape for air during the firing process.
For smaller examples see William R. Sargent, The Copeland Collection, 1991 p. 239; The Ionides Collection, Sotheby's, London, 18 February 1964, lot 273; and the Estate of Nelson A. Rockefeller, Sotheby's, New York, 30 April 1980, lot 538.
Another massive pair was sold Christie's, New York, 21 May 2003, lot 102.
The Tibor Collection was formed over decades, growing to encompass every category of Chinese export porcelain, from small, charming teawares to massive pairs of important jars. The collector had a deep appreciation for the magnificent porcelains made for New Spain as well as for the lifelike charm and elegance of Chinese porcelain figure and animal models.