Portrait of Umehara Ryuzaburo at his easel.

Born to a family of textile merchants in Kyoto, Umehara Ryuzaburo’s surroundings honed his keen sensitivity to beauty and devotion to art. He was fascinated by China’s rich cultural history and travelled to Beijing on numerous occasions for inspiration in his work. He painted many versions of the Forbidden Palace and Temple of Heaven, which became two of his signature subjects. During his sojourns in Beijing, he paid frequent visits to the Liulichang and other antique shops, and became an avid collector of Chinese antiquities.

As an artist, Umehara Ryuzaburo also practiced under the famous Impressionist Painter Pierre-Auguste Renoir and was noted by him as a natural colourist. Umehara Ryuzaburo’s affinity to dynamic compositions and vivid hues is also reflected in the colourful wucai porcelain from his collection in this sale. 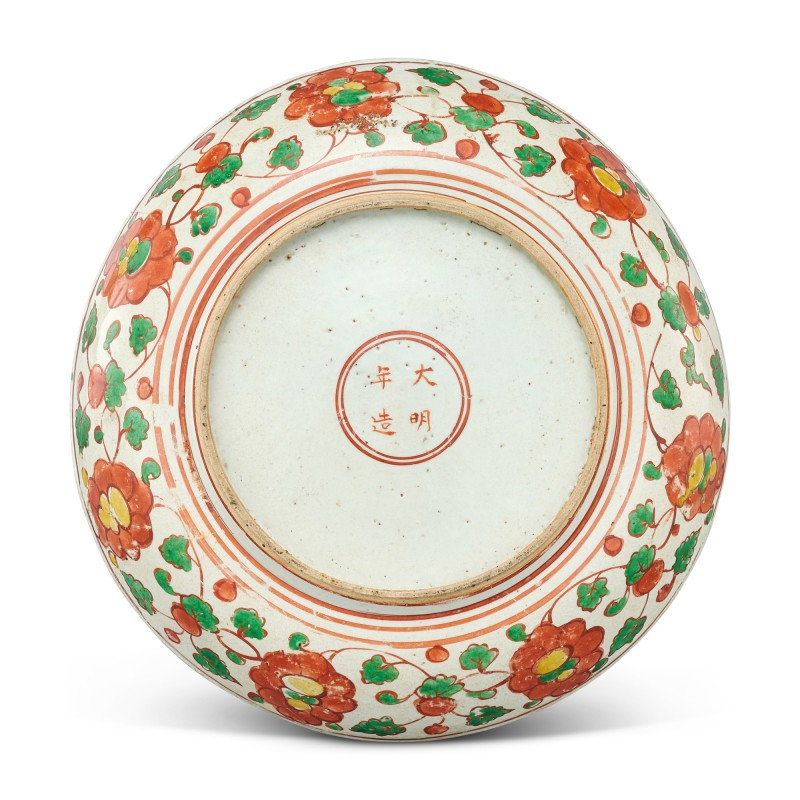 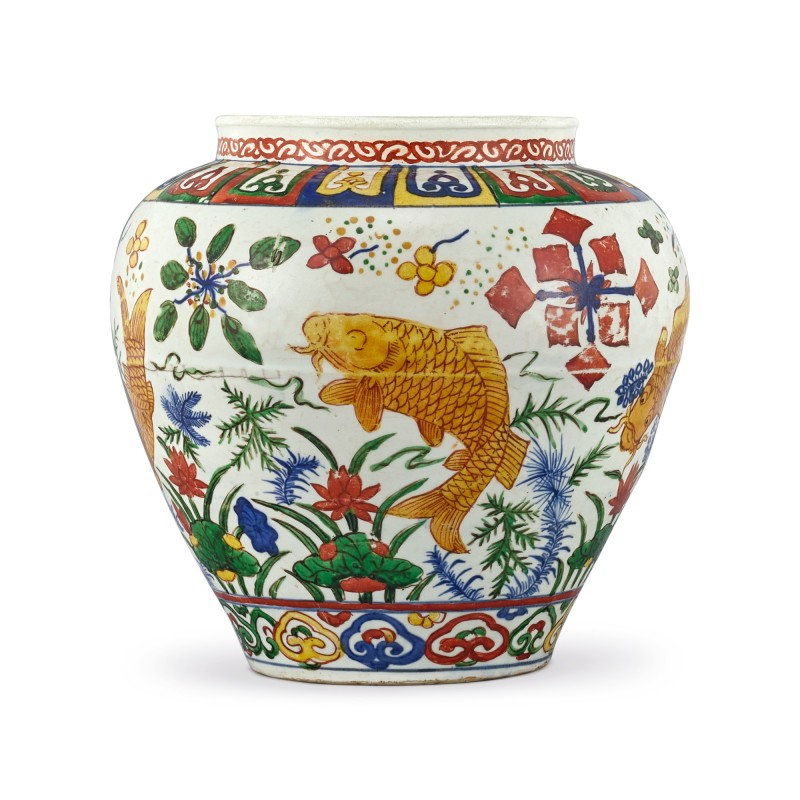 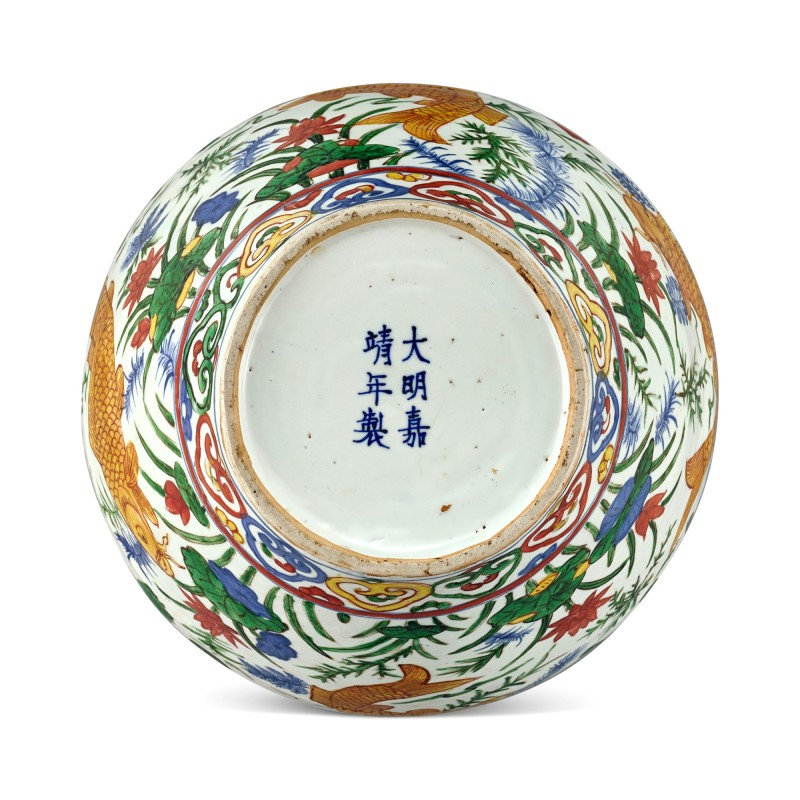 Note: 'Boldly painted with a whimsical scene of fish swimming amidst waterweeds, the present jar depicts one of the most iconic designs during the Jiajing period. It is an exceptional piece of imperial Chinese porcelain which embodied the Emperor's obsession with ancient Daoist values, as well as a joyful notion of a carefree life.

The Jiajing Emperor is known as a fervent patron of Daoist causes, it is therefore not surprising that works of art produced under his reign are brimming with Daoist imagery. Fish as an image of freedom from restraints played an important part in Daoist thought since earliest times. They are symbols of the happy, free-spirited life. The free composition and vivid execution of the design on this and similar jars beautifully echo the merry spirit of its message.

The wucai (‘five colour’) palette used for its depiction is a rare version specific to the Jiajing reign that is particularly complex. The available range of ‘five colours’, consisting of underglaze blue and overglaze red, yellow, green and aubergine, was here enlarged further by a sixth: superimposing red on yellow enamel, which required an additional firing, resulted in a rich golden-orange tone ideally suited to render the colour of golden carp, among the most coveted species of fish in China. This complicated wucai style was developed in the Jiajing period and seems to be restricted to that reign. Umehara Ryuzaburo (1888-1986) was a famous Japanese painter as well as an avid collector of Chinese porcelain and works of art. Fig. 2 shows a portrait of the artist with the present fish jar. with a carved 'dragon and phoenix' wood cover, and a wood stand reticulated with a 'floral' roundel. 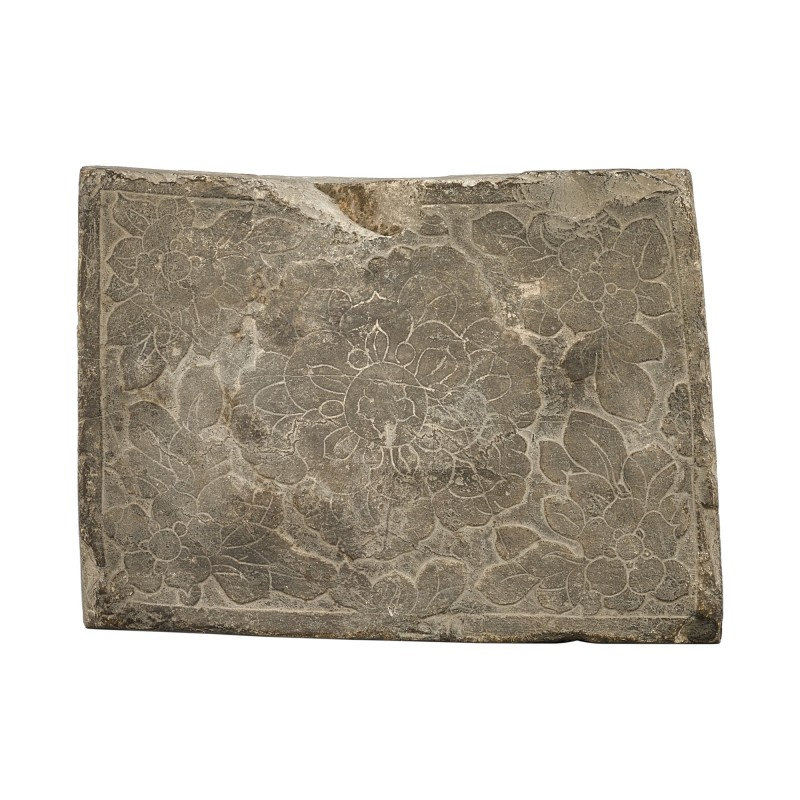 with a carved 'dragon and phoenix' wood cover, and a wood stand reticulated with a 'floral' roundel.

Note: This rare limestone rectangular stele, finely carved with sensuous naturalistic detail of each of the fours sides with a sculpture of a Buddha and bodhisattva, bears testimony to the development of Buddhist devotional art in China. It served as a vehicle for its fervent commissioner to accumulate merits and record their acts of devotion. With the dynamic growth of Buddhism in the fifth century, various regional devotional societies were formed across China which prompted unforeseen innovation in the production of religious art. Votive stone steles emerged as a new genre in the Buddhist sculptural repertoire that differentiates from monumental cave temple carvings.

Compare another Tang dynasty limestone stele included in the exhibition Ancient Chinese Sculptural Treasures: Carvings in Stone, Kaohsiung Museum of Fine Arts, Kaohsiung, 1998, pl. 64. Despite of a slightly smaller size, it draws close comparisons with the present piece in its composition, rendering of the figures and their style of drapery within the recessed niches, and the apsarases above in three-dimensional relief.