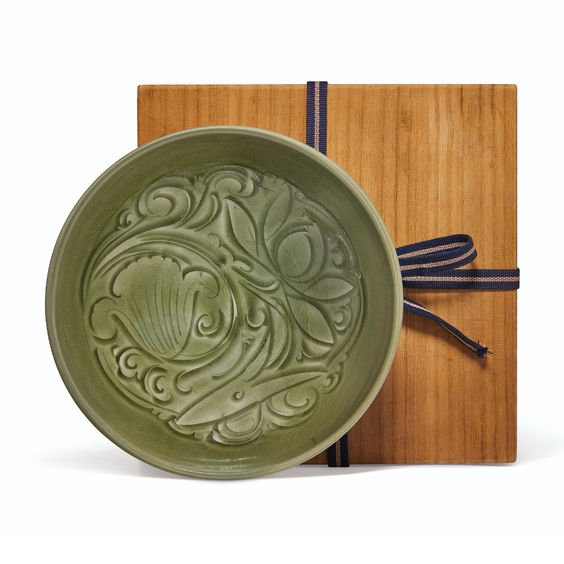 The bowl is finely potted with rounded sides rising to a lipped rim. The interior is carved with a scrolling stem bearing a lotus blossom, a large leaf and another flower. The bowl is covered inside and out with a glaze of olive-green tone, except for the base of the foot ring which shows the grey biscuit body.

Note: Located at Huangpuzhen, Tongchuanxian, Shaanxi province, the Yaozhou kilns began production of a wide range of wares during the Tang dynasty. The kilns were well placed to use water transportation to the Northern Song capital at Kaifeng, and it is recorded that Yaozhou wares were presented as tribute to the Northern Song court. Both the official Song history and other literary sources mention such tribute gifts. For instance, the official gazetteer during the Yuanfeng era (1078-1085), Yuanfeng jiuyu zhi, mentions fifty sets of tribute ceramics sent to the court from Yaozhou. A Yaozhou celadon bowl carved with a related design, formerly in the Eumorfopoulos Collection and now in the Tokyo National Museum, is illustrated by J. Wirgin, Sung Ceramic Designs, vol. II, Stockholm, 1970, pl. 9a.