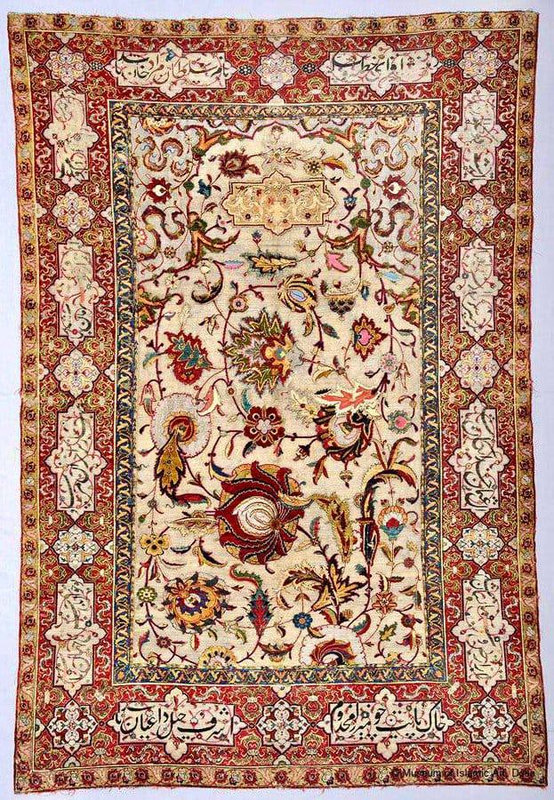 Most of these preserved rugs were intended as diplomatic gifts from the Safavid court to the Ottomans. The poetic inscription on the border is in nasta`liq script, in Persian verse & includes the name of Sultan Murad. 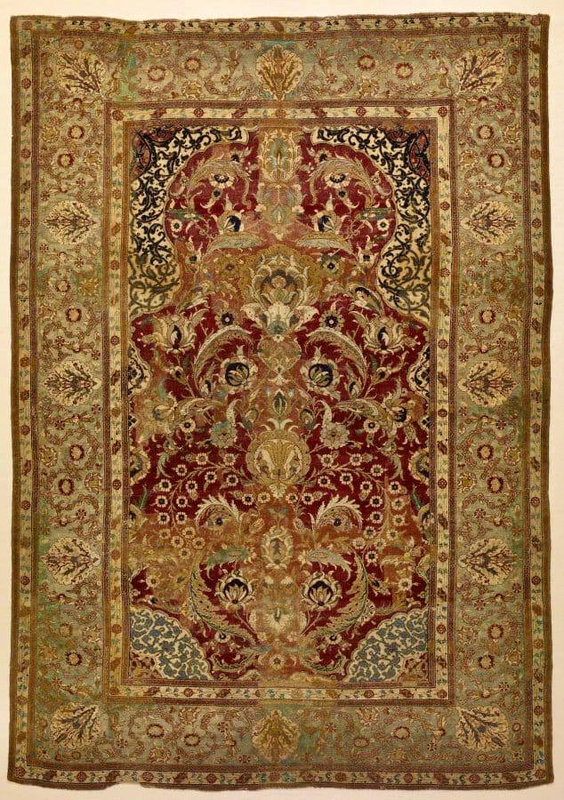 This Ottoman rug depicts a floral pattern. While the central arch has no columns to reflect the prayer niche, the arrangement of the blossom pattern is a kind of floral translation of the architecture. This weaving is part of a group that uses the most popular motif of the emperor Shah Jahan’s reign: the single flowering plant, in this case a poppy, set within a niche. 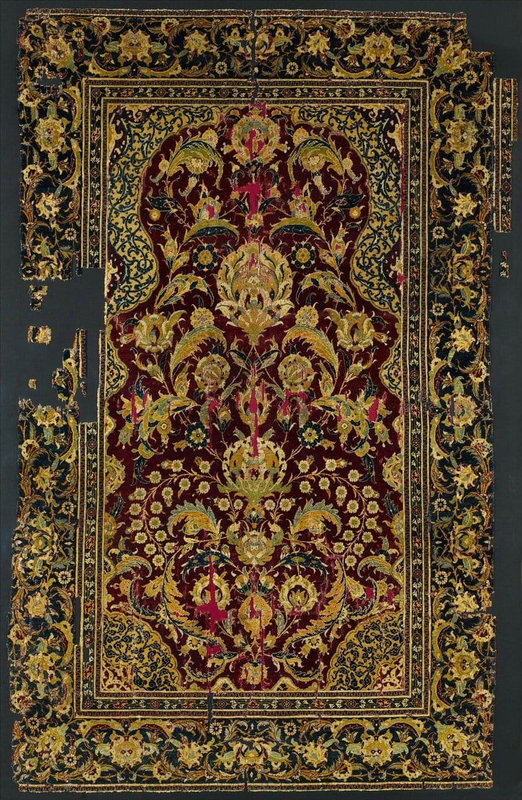 The Ottoman workshops produced a great variety of carpet designs that usually employed a group of familiar elements, consisting of naturalistic flowers, lotuses, and palmettes, often combined with arabesques. Identified by its central niche design, the Qur’anic inscriptions in its border & names of God in its spandrels, relates to a group of rugs which were a diplomatic gift from Safavid Shah ‘Abbas I to Ottoman sultan Murad III. With a central niche is in the form of a mihrab, with decorative side-columns & a hanging mosque lamp & was hung on a wall, to serve as a mihrab for communal prayers. 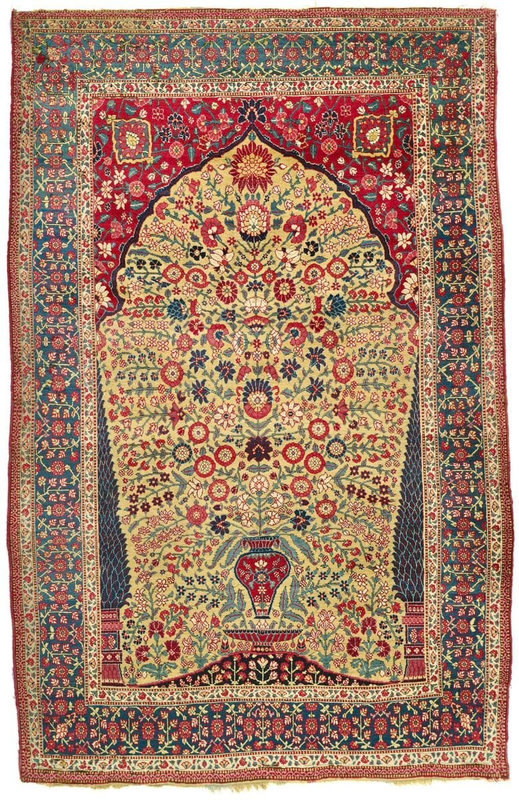 This rug belongs to the group of prayer rugs from Ghiordes, a village between Izmir and Ushak, where most of the Anatolian prayer rugs were manufactured in the 18th–19th centuries. Prayer rugs often feature a mihrab, or arched niche. This carpet is distinctive for its pairs of slender columns, a characteristic of Nasrid architecture from Muslim Spain. Includes a less common depiction of stylized water pitchers in the green areas above the arch which may refer to ritual ablution, which is required of Muslims before performing prayer. Traditionally prayer rugs feature an arched niche representing the mihrab of the mosque. This architectural element orients worshippers towards the holy city of Mecca during prayer. During their daily prayers, Muslims traditionally roll out small rugs to cover the ground, creating a ritually clean space for their devotions. Made using traditional techniques: knotted pile; symmetrical knot. 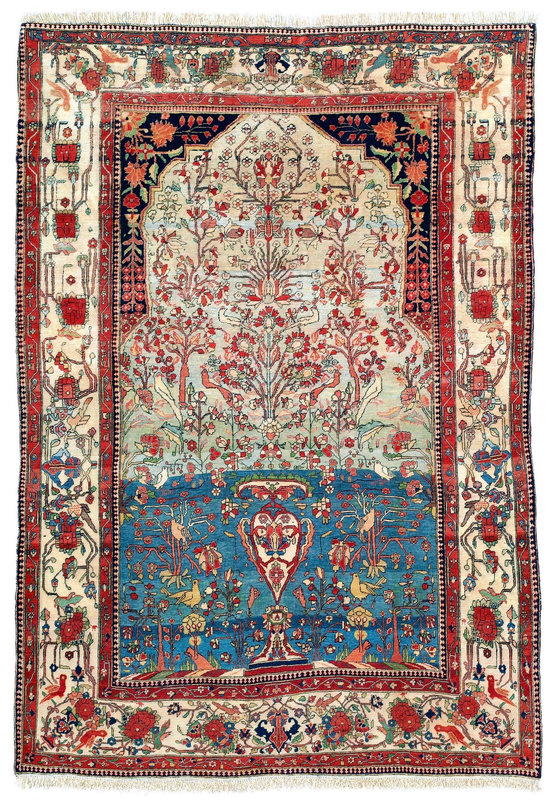 For believers in Islam, a rug is more than just a mat for praying; the rug’s design incorporates important Islamic symbols. This rug features the mihrab and depicts the gardens of paradise. In rugs woven with the tree of life or with flowering vases the architectural nature of the mihrab is sometimes emphasized by thin columns flanking the central motif, as it is in the present lot. 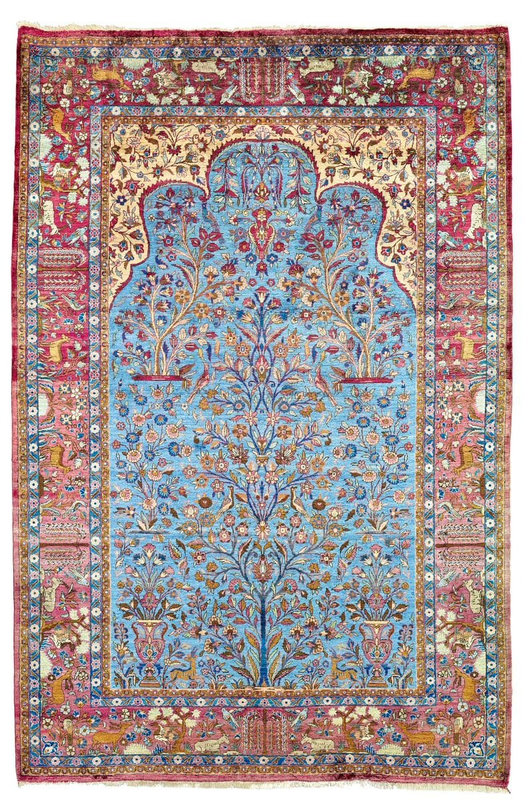 A silk kasha’s rug. The elegant niche suggests that this was a prayer rug, to be hung on a wall in the direction of Mecca, however, and not spread on the ground.