LONDON.- As part of its Jubilee Season, a month-long programme of exhibitions, auctions and events celebrating The Queen’s reign, Sotheby’s will open the largest tiara exhibition to be staged in the UK in 20 years – paying homage to one of the most symbolic signifiers of the monarch’s perennial style: the tiara. The exhibition will feature some 50 tiaras of aristocratic and royal provenance, with some pieces to be exhibited publicly for the first time. Virtually all of the tiaras in the exhibition were made for and owned by British nobility and together they offer a dazzling and comprehensive review of all major tiara design styles, through some of the genre’s most exemplary exponents.

A number of tiaras in the exhibition were worn for the Queen’s Coronation in 1953, such as the Anglesey Tiara thought to have been made around 1890; the Derby Tiara initially created for the Duchess of Devonshire in 1893 and the Westminster Halo Tiara, commissioned to Paris-based jewellers Lacloche Frères in 1930 by the Duke of Westminster for his bride Loelia Ponsonby. They bring a moving and direct link to this year’s Jubilee celebrations.

Across nearly 50 items on show, the exhibition features the most established design styles within the tiara genre, including Napoleonic Empire, Romantic Naturalism, Belle Epoque, Art Deco, Modern and Contemporary designs. Among the most special pieces within the exhibition is the historic Spencer Tiara, worn by one of the most influential members of the Royal Family past and present. Reported to have been initially created in 1767 and passed down the generations within the Spencer family, it was worn by Lady Diana, just over 40 years ago, and turned heads when Lady Diana stepped into St. Paul's Cathedral in the most highly anticipated Royal wedding of the past century. It will now be exhibited in London for the first time since the 1960s.

Its famous garland style design has a central heart-shaped motif set with diamonds flanked by continuous running scrolls, interspersed with star- and trumpet-shaped flowers – also set with diamonds, mounted in silver and gold. The heart-shaped piece was particularly sentimental to Lady Diana as her grandmother, Lady Cynthia Hamilton, received it as a wedding present for her 1919 marriage to “Jack”, Viscount Althorp, the future 7th Earl Spencer.

Over nearly 200 years, as is often the case in jewellery of this kind, the Spencer tiara was added to and transformed until crown jeweller Garrard was commissioned in the 1930s to turn the tiara into the final article. Lady Diana was known to be fond of the Spencer Tiara, often wearing it to white-tie events – sporting the dazzling piece at least seven times between 1983 and 1992 on special occasions during royal tours and high-profile events within and outside the UK. A further highlight is an Emerald and Diamond Tiara designed by Prince Albert in his favoured Gothic Revival style for his wife Queen Victoria in 1845, crafted by crown jeweller Joseph Kitching for the princely sum of £1,150. One of several the Prince conceived for his wife over the years, this was reportedly her favourite of them all, and is widely seen as one of the most elegant and sumptuous coloured gemstone tiaras ever created anywhere in the world. Set in gold, it has wonderful symmetry and balance with cushion-shaped diamonds interspersed with step-cut emeralds lined across its base, topped by further diamonds and emeralds shaped in scrolls and surmounted by a graduated row of 19 inverted cabochon pear-shaped emeralds, the largest of which weighs 15 carats.

This tiara is often associated with representations of a younger Queen Victoria with her family – chief among those is the ‘The Royal Family in 1846’ portrait by Franz Xaver Winterhalter, depicting Queen Victoria with Prince Albert surrounded by their children, as well as a number of more intimate portraits by the artist. Queen Victoria is also known to have worn the tiara on several royal and official engagements, including a state visit to France in 1855.

“The Queen’s Jubilee celebrations have given us the perfect opportunity to put on public display an outstanding selection of tiaras from noble and royal provenance, many of which haven’t been exhibited in decades. The sourcing of these jewels has been a labour of love, resulting in an exhibition that showcases the best iterations within the tiara style register, through some of its most famous incarnations – including the much-loved and photographed Spencer Tiara. This is also a wonderful moment for us to shine a special light on the dazzling craftsmanship delivered by generations of mainly British-based jewellers across several centuries of tiara making.” --Kristian Spofforth, Head of Jewellery at Sotheby’s London. 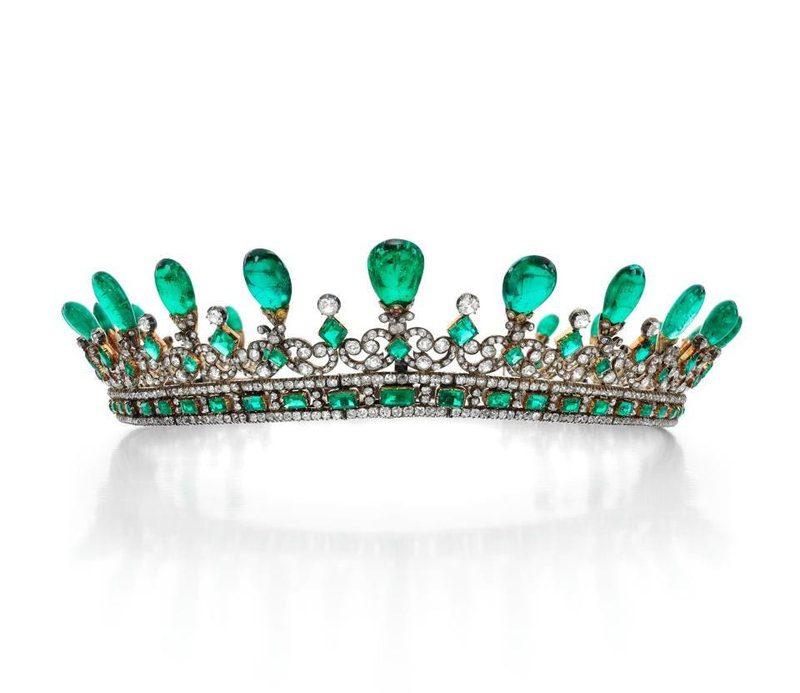 “This diadem encapsulates the rebirth of the tiara as a highly desirable jewelry and fashion trend,” according to Sotheby’s. Taking inspiration from head ornaments in ancient Greece and Rome, Joséphine Bonaparte reintroduced tiaras through a Neoclassical style that mixed decorative items such as intaglios and decorated cameos with more precious elements including pearls and diamonds.

The gold diadem is adorned with five oval hardstone cameos made of layered agate and jasper – initially created between 16th and 18th century – including the head of Medusa and a profile of Zeus, all within a border of blue enamel and connected by two rows of undulating entrelac de ruban motifs, each with a blue enamel lozenge motif at the center. The diadem was made in Paris for Joséphine Bonaparte by artist Jacques-Ambroise Oliveras, around 1805. This tiara was sold previously by Sotheby’s London on December, 2021, as part of a set of two which fetched estimate at £576,600 ($714,000). Tiaras on exhibition and for sale

While the majority of the historic tiaras have been loaned to Sotheby’s for this exhibition, a small number will be available for sale, including new commissions by contemporary British jewelers such as Christopher Thompson-Royds and Kiki McDonough. The Rosebery Tiara, on loan from a British noble family. A diamond tiara, 1880s, set with a number of impressive and important diamonds.Tiaras exhibition at Sotheby’s, June 2022. Courtesy Sotheby's 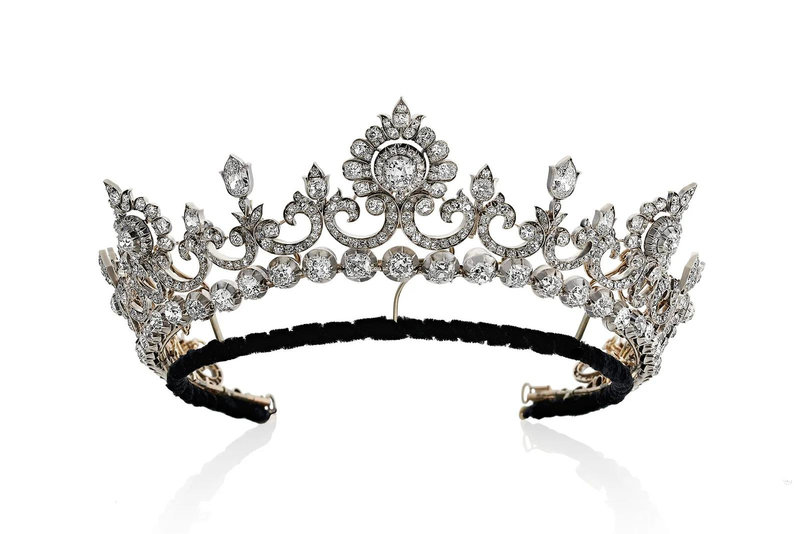 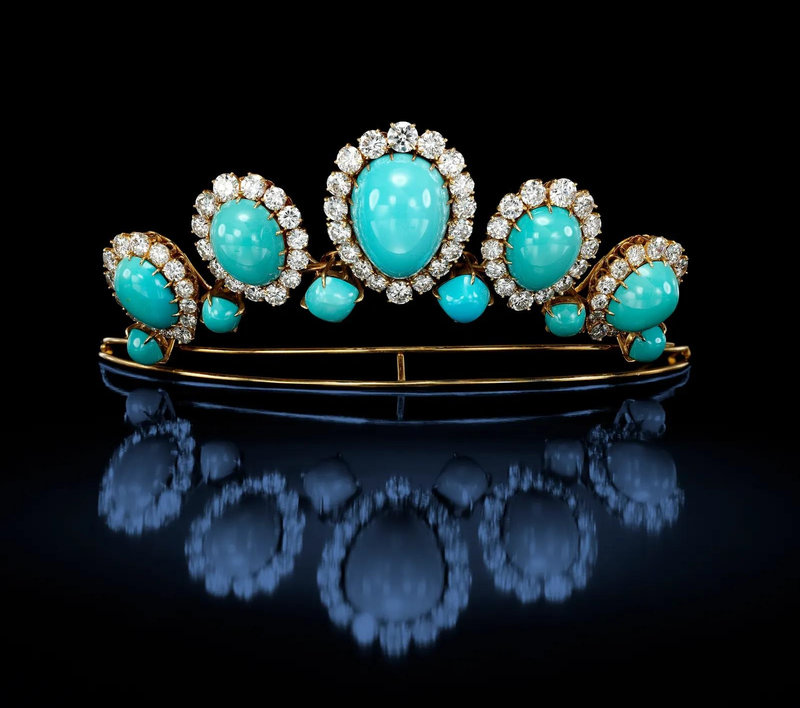