'The Renaissance in the North: New Prints and Perspectives' at The National Gallery of Art, Washington

'The Renaissance in the North: New Prints and Perspectives' at The National Gallery of Art, Washington WASHINGTON, DC.- Printmaking flourished in Northern Europe during the late 15th and 16th centuries as artists harnessed the power of the multiplied image. Relatively inexpensive, portable, and widely disseminated, prints aided religious devotion, advanced the fame of local and national figures, or offered moralizing lessons to enlighten and entertain an expanding international audience. On view in the National Gallery’s West Building from July 3 through November 27, 2022, The Renaissance in the North: New Prints and Perspectives presents some 30 newly acquired prints by Renaissance artists working in Germany, Switzerland, and the Netherlands.

Drawn entirely from the National Gallery’s collection, the exhibition features rare prints by iconic artists such as Albrecht Dürer and Hendrick Goltzius, along with spectacular works by their printmaking contemporaries, including masterpieces never before exhibited at the museum. From small allegorical compositions intended for private contemplation to oversize, multisheet woodcuts made for civic decoration, these engravings, etchings, and woodcuts highlight the immense creativity and technical skill of the graphic artists working north of the Alps. Jörg Breu the Elder, The Virgin and Child with Saint Conrad and Saint Pelagius, 1504, hand-colored woodcut on laid paper, Purchased as the Gift of Ann and Matthew Nimetz, 2012.143.1.

“In our image-filled world, it is hard to imagine the sense of possibility that the burgeoning art of printmaking presented in the 15th and 16th centuries. This exhibition takes us back to that moment, when artists of the Northern Renaissance developed innovative styles and techniques that captivated the public and collectors,” said Kaywin Feldman, director, National Gallery of Art. “In recent years we have been fortunate to acquire several rare prints that help us present a fuller picture of this vital period of printmaking.”

The exhibition begins with a room devoted to prints made circa 1460 to 1550 in Germany and Switzerland, the region where print production first flourished in northern Europe. Artists in cities on international trade routes such as Nuremberg, Augsburg, and Basel were perfectly situated to reach broad audiences with new genres and formats of the printed image. Examples such as Hans Weiditz the Younger’s commemorative woodcut likeness of Emperor Maximilian I (1519) and Daniel Hopfer’s etching of Martin Luther (1523) illustrate how printed portraits served to shape and extend a sitter’s popular legacy. Erhard Schön’s monumental woodcut Army Train and Death (c.1532), a five-foot-long procession of mercenary soldiers, and Urs Graf’s exceedingly rare white-line woodcut of a Standard Bearer from Bern (1521) reflect pride in regional military might and independence. Artists in this period also understood the potential of prints as self-promotional tools and began signing compositions with their initials to promote their personal brands. The exhibition features two engravings monogrammed by Albrecht Dürer, including Saint Jerome Penitent in the Wilderness (c. 1496), an early work that demonstrates the artist’s unparalleled command of the medium. Another highlight of the show, a woodcut depicting a Battle of Naked Men and Peasants (1522) set in a forest of northern fir trees, is signed with the full name of the block cutter, Hans Lützelburger. The print advertises the craftsman’s ability to depict local landscapes, delineate dynamic figures, and carve alphabetic type for printing. Several works, including an etched portrait of Emperor Charles V by Daniel and Hieronymus Hopfer (1521), reveal how 16th-century hand-coloring could enhance the visual impact of these black and white prints. 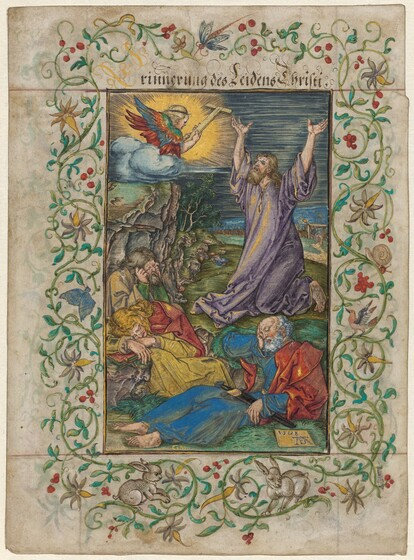 Albrecht Dürer, Georg Mack the Elder, Christ on the Mount of Olives, 1508 and 1580s, engraving hand-colored with watercolor and gouache, heightened with gold and silver, on laid paper mounted to a piece of parchment decorated with floral borders, Purchased as an Anonymous Gift, 2013.108.1. The second room features prints made in the Netherlands between roughly 1560 and 1600 when cities such as Antwerp and Amsterdam became printmaking hubs. Prints in this room show the period’s collaborative process. Professional printmakers often translated designs by other artists into carved wood blocks or incised metal plates for replication. Print publishers typically financed and coordinated the production, sold the sheets, and reaped most of the profits. The publisher Hieronymus Cock appears at the door to his shop in a 1560 print from a series designed by the architect and painter Hans Vredeman de Vries. This is one of several prints in the exhibition, including a Panel of Ornament with a Niche and Strapwork (1557) designed by Cornelis Floris II, that the prolific brothers Johannes and Lucas van Doetechem etched and engraved for Cock. These works also reflect the tastes of an emerging class of educated art collectors who sought prints of mythological subjects or scenes from everyday life containing moralizing messages. Jan Sadeler’s depiction of A Pleasure House (1588), engraved after a design by Joos van Winghe, entices the viewer to join the party but warns in its Latin inscription about the sins of lust and overindulgence. On the other hand, Gerrit Pietersz Sweelinck’s sinuous etching Charity with Faith and Hope (c. 1593) celebrates the Christian virtues in allegorical form. Northern artists also took inspiration from their Italian Renaissance counterparts. Some, such as Hendrick Goltzius, traveled south to study the masters in person. His engraving The Triumph of Galatea (1592) reproduces Raphael’s famous fresco in Rome using his own virtuosic combination of lines and hatching techniques. 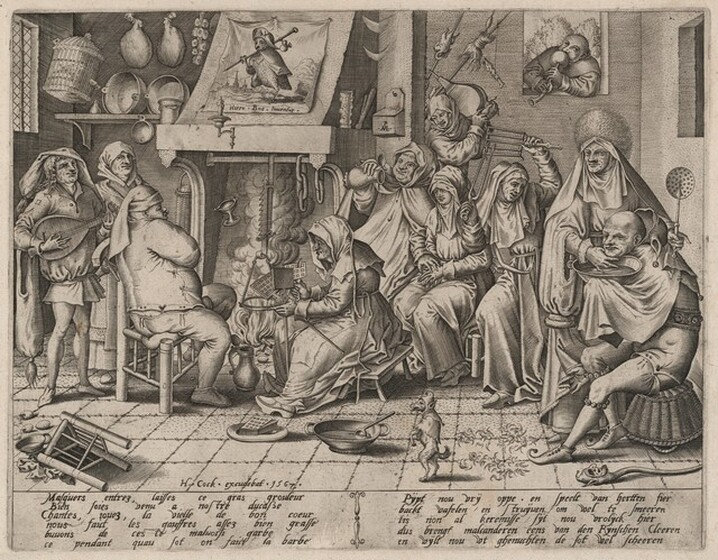 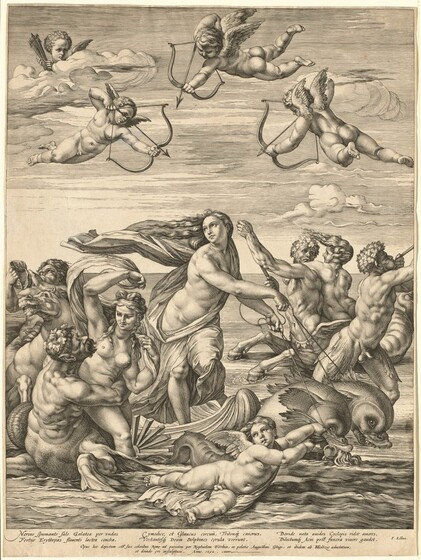 Commentaires sur 'The Renaissance in the North: New Prints and Perspectives' at The National Gallery of Art, Washington