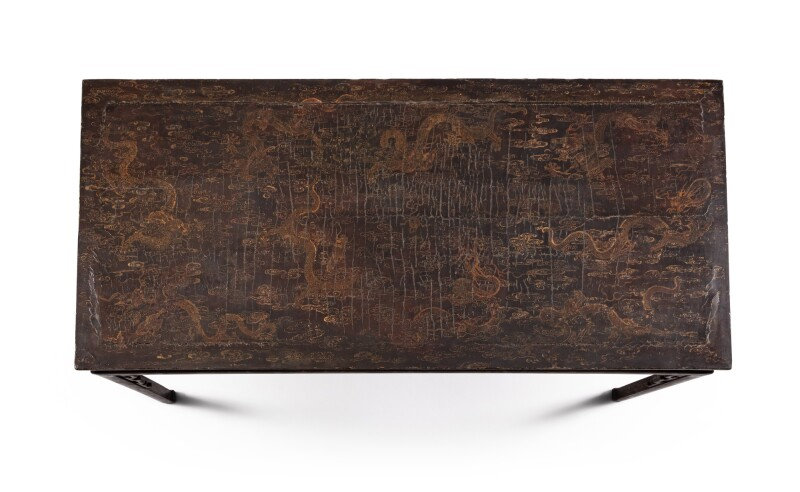 the rectangular top supported on four corner legs continuing to straight horse hoof feet, the top set above a pierced waist and a shaped apron reticulated with a frieze of archaistic dragons in openwork extending onto the interior of the legs, the top dramatically painted in shades of red and gold enamel on a deep purplish-brown lacquer ground with nine five-clawed dragons writhing amongst clouds vying for a central pearl.

Note: The present calligraphy table with its exclusive decoration of nine dragons was most likely intended for an imperial usage within the forbidden city. Surviving lacquer calligraphy table are actually very rare and only two other nine dragon tables are recorded in the collections of Palace museum, Beijing. The first is a red-ground lacquer table, somewhat narrower and longer, with a related striking design of nine dragons amongst clouds, illustrated in The Complete Collection of Ming and Qing Furniture in the Palace Museum, Beijing, vol.8, page 108, n°47 (fig.1). The other, also on red lacquer and decorated in a qiangjin and tianqi technique is illustrated in ibid. vol. 9, p 442, n° 131. Compare also a purple ground lacquer table of related size, form and proportion but with a landscape decoration, also illustrated in ibid. vol. 9, p. 539, n° 154. Similarly to the precepts of ornamentation for the court robe, whereas only the emperor himself, his sons, and the princes of the first and second ranks were allowed to wear nine five-clawed dragons robe, the same precept would prevail for the furniture at the court. Calligraphy table were intended to accommodate the organisation of all the writing paraphernalia including brush pots, table cabinets, ink stone or seal boxes and provide ample space for this practice in which the emperor excelled and was very fond of. Considering the proportion of this table, we may assume that it was intended to be placed in front of a full size throne.

The present table comes from the collection of Francesc Cambó i Battle (1876-1947) at the Laietana Palace, Barcelona.

Francesc Cambó was the most influential figure of the so called “regenerationist catalanism” in the first third of the 20th century Spain. Since his youth he was active in regionalist organizations, some of which he had co-founded. In 1901 he founded a new political party, the Lliga Regionalista de Catalunya, being elected that same year as municipal councilor in the city of Barcelona.

While mostly known as a politician, Cambó became one of the most important art private collectors and cultural donors in the history of his country. He bequeathed almost all his artworks to the public in state museums in Madrid, at the Prado Museum and in Barcelona.