'China through the Magnifying Glass: Masterpieces in Miniature and Detail' at the Cleveland Museum of Art

'China through the Magnifying Glass: Masterpieces in Miniature and Detail' at the Cleveland Museum of Art

CLEVELAND - Objects in miniature have mesmerized people of all cultures throughout the ages. The CMA’s Chinese collection has an extraordinarily large number of high-quality small-scale objects and miniatures from various dynasties. This exhibition focuses on China and explores the role and function of miniatures and small-scale masterpieces of craftsmanship. About 80 objects dating from ancient times to the 1800s will be presented according to their respective use and function in themed sections: “Accessories and Ornaments,” “Ritual and Devotion,” “Luxury and Craftsmanship,” “The Scholar’s Desk,” and “Toys, Boys, and Games.” These themes question each object’s function and role in society as a way of achieving a better understanding of China’s culture and history, as well as miniatures worldwide.

Bringing together more than 80 small-scale masterpieces, the show considers the varied functions of these objects, whether as toys, accessories, religious emblems or decorative pieces. Highlights include a boxwood miniature from the Qing Dynasty (1644–1911) depicting one of the eight immortals in the Daoist pantheon, who rides a raft on green waves made from ivory, and a small white jade thumb ring, also from the Qing Dynasty, with a dragon and mouse carved in relief. Elsewhere, a miniature of a kneeling boy from the Ming Dynasty (1368–1644) exemplifies the precise detail achieved by ivory artists of the era. These two phoenix birds made of thin gold foil have tiny holes all along its edges, suggesting that they were sewn on textiles. In the Ming dynasty (1368–1644), luxury items became more affordable to larger parts of the society, including women, merchants, and literati in non-official positions. Imperial patronage and a growing urban population encouraged consumption of luxury goods and local craftmanship. This ivory illustrates the superb carving skills and the creative mind of the skilled artisan who sought clients on a competitive market. This white jade thumb ring was carved into the form of a dragon and a mouse in relief.

When polishing and shaping the white jade, the carver deliberately left the yellowish "skin" of the original rock on one section of the ring. He Xiangu is one of the Eight Immortals in the Daoist pantheon. She was thought to have been a real person who lived in the Tang dynasty, originally named He Qiong. As a teenager, she was instructed in a dream to eat powdered mica to become immune from death and to vow to remain unmarried. She did so and became an enlightened practitioner of Daoism.

In this delicate carving, He Xiangu is placidly seated in a gnarled and knotty wooden raft amid green-tinted ivory waves. In front of her rests a bamboo basket filled with objects associated with Daoist immortality, while she holds a branch of lingzhi fungus. 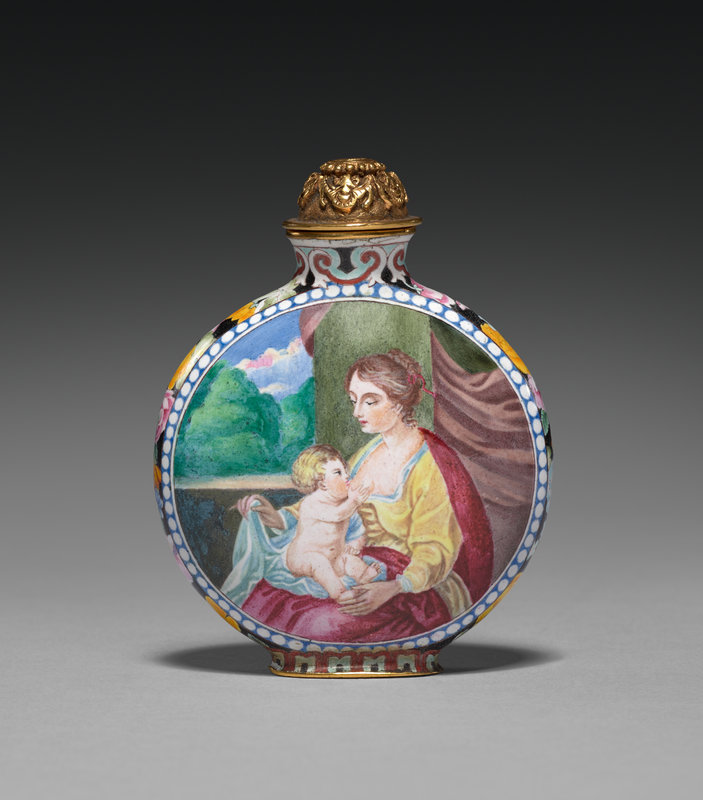 The stopper is decorated with bats, which traditionally symbolize good luck, since both words (蝠 and 福) are both pronounced as fu in Chinese.

Snuff bottles were introduced from Europe to China around the 1700s to hold portable snuff or medicine.

Commentaires sur 'China through the Magnifying Glass: Masterpieces in Miniature and Detail' at the Cleveland Museum of Art