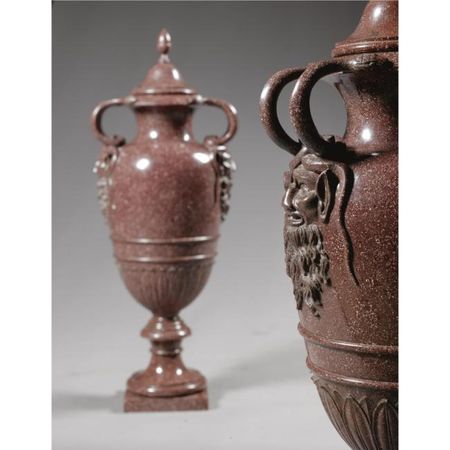 Note: magnificent monumental vases in Egyptian porphyry are vaguely reminiscent of a pair of late 18th century Roman vases with serpent handles in the Louvre Museum, Paris, illustrated by Malgouyres, op. cit., p. 170, no. 64, which were originally recorded in the inventory of the comtesse du Barry at Louveciennes in 1794. The design for these type of vases in turn almost certainly was inspired by 17th century Italian designs such as those for example of Stefano della Bella's, Raccolta di Vasi Diversi, circa 1664, which featured serpent handled vases.

A feature common to porphyry vases as well as to the present pair, is the quality of the carving and the technical feat of carving from the same block due to the hardness of the stone, the saucer shaped foot, the way the handles are cut and finally the material, a dark red Egyptian porphyry. There is in the Wallace Collection, a Transitional porphyry vase with entwined serpent handles (286), illustrated by Hughes op. cit., p. 1385, which has been attributed to the Hôtel des Menus-Plaisirs in Paris. The taste for stone vases developed in France during the reign of Louis XVI, due to the production of the Hôtel des Menus-Plaisirs established in Paris by the Duc d'Aumont (1709-1782), which cut and polished hardstones and precious marbles. In his lecture to the Furniture History Society at the Victoria and Albert Museum in London on 25th April 2009, Bernard Rondat, produced evidence which confirmed that French designers in Paris produced models for stone vases which were then cut in Rome.

Red porphyry (lapis porphyrites) :
As mentioned above, the present vases are carved from Red Egyptian porphyry the so called porfiro rosso antico, a porphyry which is only found in the mons porphyrites region betweeen the Middle Nile and the Red Sea. This type of Egyptian porphyry was first quarried by the Romans. After the fall of the Roman Empire the quarries ceased to be worked. Half cut monolithic columns and other fragments are still to be found in the deserted quarries today. Almost the sole source for the red porphyry of this type used in Western Europe were columns taken from classical temples and other ruined Roman remains, see Watson, op. cit., p. 73.
A pair of Louis XV vases with satyr masks of monumental size was sold from the collection of M. Hubert Givenchy, Christie's, Monaco, 4th December 1993, lot 18..