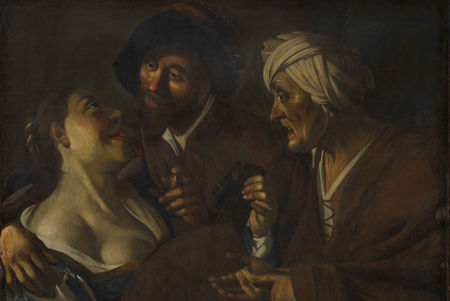 LONDON.- A painting that supposedly was made by Hans van Meegeren, one of the most notable forgers of all time, dates, from the XVII Century and might have even hung in Johannes Vermeer's house, according to the Art Newspaper.

The painting is titled “The Procuress” and is housed at the Courtauld Institute in London, which accepted it in 1960 as a donation from Professor Geoffrey Webb, a specialist in historic architecture.

Webb, who worked in Germany after World War II, had received it as a gift for his help in the returning of works of art to rightful owners.

He believed that it was a forgery made by Van Meegeren (1889-1947) which Dutch authorities had recovered after the War in a chalet that Van Meegeren had in Nice, Cote d'Azur (South of France).

The painting was loaned to three forgery exhibitions as an example of an excellent artistic forgery.

The painting represents three characters, the Procuress, the character on the right that points with his finger at the other hand as if fixing a price, while in the middle, a man talks to the smiling prostitute beside him, in his arms.

There are two other versions of “The Procuress” that are considered originals: one of them is property of the Rijksmuseum in Amsterdam and the second is in the Museum of Fine Arts, Boston, which obtained it at an auction at Christie’s.

Experts have examined, with great care, the painting donated to the Courtauld Institute and have assured that they have found no modern pigments and believe that it is indeed a painting from the Dutch Golden Age.