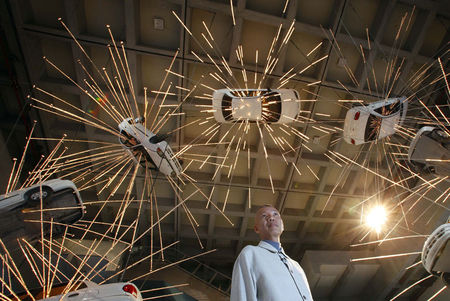 China-born artist Cai Guo-Qiang poses for the media in front of his art piece titled "Inopportune: Stage 1" during a media preview of his "Hanging Out in the Museum" exhibition at the Taipei Fine Arts Musuem November 20, 2009. The exhibition will last from November 21 to February 21, 2010. Reuters/Nicky Loh.

TAIPEI.- The Taipei Fine Arts Museum presents a retrospective exhibition for the artist called “indispensable to this world” by The New York Times. Cai Guo-Qiang has left his mark on various cities and countries, from Fujian to Shanghai, from China to Japan, and from New York to the world. His work expresses a kind of metaphysical thinking derived from Eastern philosophy and modern cosmology. Known worldwide for his gunpowder-based works and large-scale installations, Cai became the first Chinese artist to hold a solo exhibition, I Want to Believe, at the Guggenheim Museum, New York in 2008.

This retrospective, which traveled to Beijing and Bilbao, demonstrated his achievements and place in contemporary art. Hanging Out in the Museum is the largest retrospective to be organized since. In addition to showing the same large-scale installations, gunpowder drawings, and video documentation of his explosion projects, Cai has specially created three significant new works for this exhibition in Taiwan: Strait, Day and Night and Taroko Gorge. Embodying his unique historical and cosmic view, these works address the problems of existence faced by man in contemporary society through artistic forms and clearly illustrate the process of realizing Cai’s artistic ideas.

Named among ArtReview’s annual Power 100 four times, Cai Guo-Qiang was born in Quanzhou City, Fujian Province. He speaks Fukienese and is also a follower of the goddess Mazu; for him, coming to Taiwan “feels like coming home.” In 1998, Cai was first invited by the Taipei Fine Arts Museum to realize Golden Missile and Advertising Castle for the 1998 Taipei Biennial. In the same year, he was commissioned to realize the No Destruction, No Construction: Bombing the Taiwan Museum of Art project. In 2004, Cai curated the BMOCA (Bunker Museum of Contemporary Art: Everything is Museum No. 3). After the September 21, 2000 earthquake and August 8, 2009 floods, he donated his works to charity sales, showing his deep affection and friendship for Taiwan.

This is Cai’s second collaboration with the Taipei Fine Arts Museum and his first exhibition inside the tall, spacious galleries of the museum. Through the positioning of the installation works in the architectural space, Cai looks back at his works and places them in new contexts, challenging and energizing the museum space in unusual ways. The 35 works on exhibition are drawn from internationally renowned museum and private collections, and include three specially created new works. The first floor features a total of seven large-scale installations, while the second floor features gunpowder drawings, video documentation, and timelines.

As a contemporary artist, Cai Guo-Qiang not only dreams audaciously, he is also strongly effective at realizing his artistic vision. His explosive energy does not stem from gunpowder, but from an unrestrained flow of creative energy, an ability to create social dialogue, and a dogmatic romanticism. This exhibition highlights the artist’s background and development, his creative process, and his insistence on and methods of making art more accessible to the general public. To fully embrace the theme of “hanging out at the museum” and to create opportunities where the public can interact with art, a series of activities and programs, such as the public viewing and volunteer training for the creation of several gunpowder drawings in the exhibition, and related education programs have been initiated. The exhibition also seeks to examine Cai Guo-Qiang’s creations and the zeitgeist in his art, through contemplating the practice of contemporary art, critiquing socio- and geopolitics, and reflecting on Eastern aesthetics and philosophy.