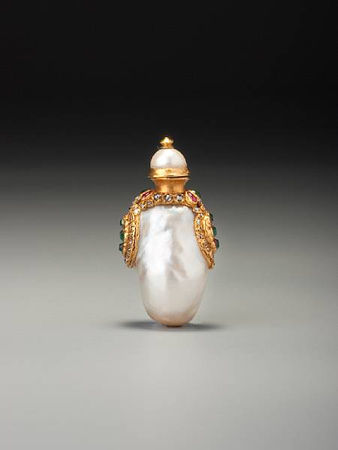 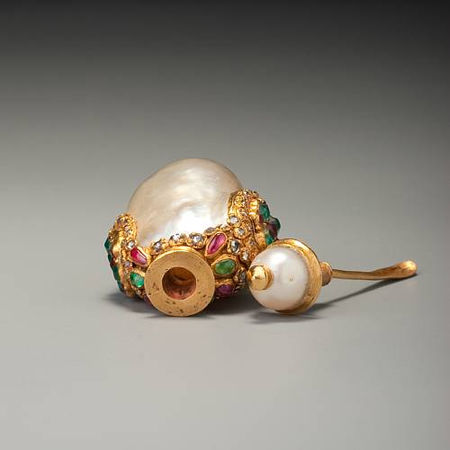 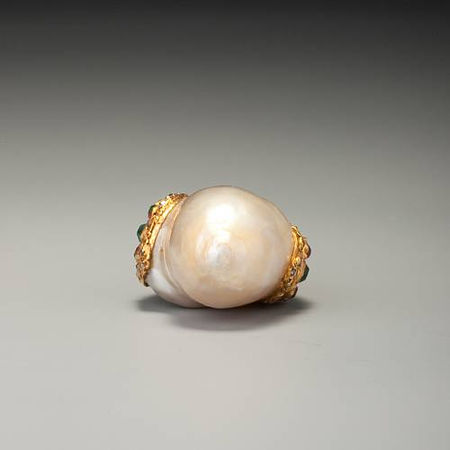 Commentary: There can be little question that this was made as an imperial gift, and given its similarities to the two pairs of bottles Treasury 7, nos. 1660-1663, we can also be reasonably certain of a Guangzhou origin for reasons given there. By the Qing dynasty pearls were highly valued as gems, and used to decorate the hats of the emperor, empress and imperial concubines, and according to Cammann (JICSBS, Summer 1985, p. 16), the laws of the later-Qing, announced during the Qianlong reign, confined the use of a pearl-bead necklace to the emperor. Even the heir-apparent was not allowed to wear a necklace of Eastern Pearls (fresh-water pearls from rivers north of the Great Wall). Freshwater pearls were plentiful in China during the Qing dynasty, found in rivers from Guandong province to north of the Great Wall. They would also have been imported from the many different sea-pearl producing areas within trading distance of Chinese ports, and probably from as far afield as India and Ceylon (present-day Sri Lanka). An enormous pearl like this, kitted out with solid gold, is highly likely to have ended up being presented to the emperor, probably as impressive tribute. The workmanship suggests that it was made for the Qianlong emperor. Apart from being typical of the more baroque side of his taste, the matching pearl stopper here is also likely to have been made specifically with the emperor in mind. The similarities between snuff-bottle stoppers and court hats, both imperial and official, has been noted before, and we have found that whenever we find an obviously original pearl stopper of this sort, it accompanies an imperial bottle which could easily have been used by the emperor himself. In this case, even the spoon is made of gold. Only one other baroque pearl of anything like comparable quality exists, the famous one in the Oakland Museum collection with its green jadeite shoulder mantel of leaves (see Jutheau 1980, p. 131, fig. 1; Williams 1977, p. 21, no. 520, also in JICSBS, December 1977, p. 29, fig. 60; JICSBS, Summer 1984, p. 13, fig. 17; JICSBS, Summer 1998, p. 15, fig. 39 top, and Snuff Bottles of the Ch'ing Dynasty 1978, no. 101). That, too, is likely to have been made for the emperor.

Further evidence of the Guangzhou origins of the present bottle is provided by an extraordinary double-gourd snuff bottle in the Royal Ontario Museum (kept, intriguingly, in the European Department - no. 928.29.272, illustrated in JICSBS, Winter 1989, p. 5, fig. 18). The compressed form has a European watch inset in the lower bulb surrounded by encrusted red glass (presumably) and pearls. It has a matching stopper inset with a band of small pearls, and was probably also made as a gift for the emperor. The integration of watches and clocks into fancy works of art, frequently with inlaid gems or more often glass, to be presented to the emperor was standard at Guangzhou during the eighteenth and nineteenth centuries. Another related bottle, simply encrusted with a formalized floral design in green and red glass with the centres of the flowers in either glass, as catalogued, or possibly crystal was in Christie's, Hong Kong, 3 May 1994, lot 924 (also illustrated in JICSBS, Spring 1994, p. 34 lower left).

This spectacular little gem, in both the literal and metaphoric sense, is one of the great imperial snuff bottles. It is unique, outrageously impressive, and gorgeous. It is one of the crowning glories of the Bloch Collection and, given that George Bloch was an expert on the subject of pearls and one of the many sources of the funding for the collection was a dealership in pearls which he maintained as a side-line until quite recently, it seems entirely appropriate that it should have come into the collection.

Bonhams. Snuff Bottles from the Mary and George Bloch Collection: Part I, 28 May 2010 to 29 May 2010. JW Marriott Hotel www.bonhams.com