Only an artful designer can imitate the suppleness of fabric when creating a piece of jewelry. Michelle Ong is one of a rare few to achieve this capriciousness. She has transformed the bib necklace, a traditional style from the turn of the twentieth century, into a masterpiece of design and craftsmanship that simulates lace. In place of thread on this necklace, diamondseplatinum sections are “woven” into a latticework pattern with the crossing highlighted by a diamond. Teardrop and cushionshapedrose-cut pendant diamonds provide contrast to the design with each gemstone decreasing in size to the clasp. This subtle but clever arrangement draws the eye, demanding to be noticed. When worn, this necklace drapes around the neck and feels like the fabric it is imitating. When a woman such as Michelle Ong designs jewelry, she understands the medium in a different way than a man. She knows how a piece should be worn, how it should feel to the touch and, most importantly, that it should not be too heavy; otherwise, it will be uncomfortable to wear. This necklace fulfills all of the above.Michelle Ong works out of Hong Kong. In 1985, she and her partner, Avi Nagar, started as importers and wholesalers of fine diamonds under the name of Dorera but the firm soon developed a reputation for its custom designed jewelry. In 1999, thefirm’s name became Carnet and it was at this time that their design focus became more western with piece made to an exacting standard. MICHELLE ONG FOR CARNET. LITERATURE  The Edwardian period officially began in 1901. Fashion of the period, although inspired bythe French courts of the  eighteenth century, is characterized by an ethereal lightness and elegance. Layers of luxurious lace and feathers decorated garments in soft pale colors. Edwardian jewelry was designed to complement this aesthetic and predominantly featured diamonds in order to look as light and delicate as possible, reflecting the femininity of the Edwardian lady. This was the first time jewelry was made to be worn at night, now illuminated by electricity rather than candles, thus creating a dazzling effect. Edwardian jewelry craftsmanship and design is intricate with pierced openwork set with diamonds in platinum, garlands as the primary motif, and further enhanced with bows and ribbons. Thismagnificent choker is an exceptional example of the period. 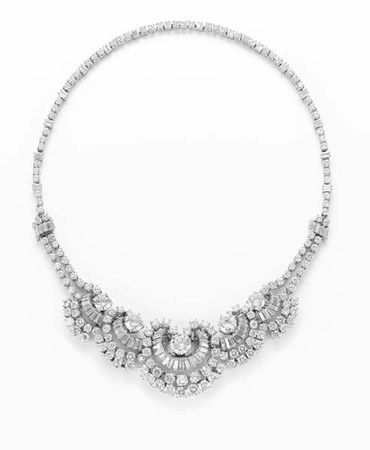 The front designed as a series of graduated circular and baguettecut diamond scrolling links, each centering upon a larger circularcut diamond, to the circular and baguette-cut diamond back chain, mounted in platinum and 18K white gold, length 14 inches.   Signed 'Boucheron Paris', no. 58 318, with French assay marks and maker's marks. ESTIMATE $85,000-100,000. SOLD $92,500 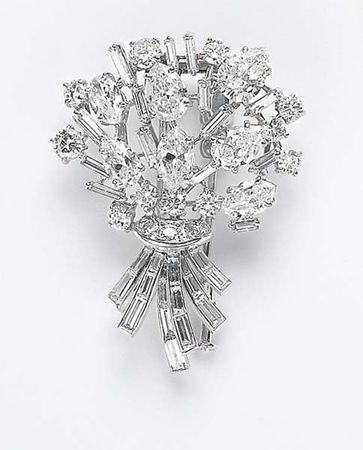 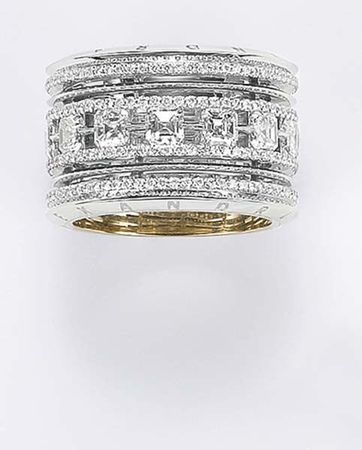 Designed as an openwork wide band, centering upon a row of asscher-cut diamonds within a pavé-set diamond border to the outer similarlyset diamond border, mounted in white and yellow gold, size 7 1/2.   Signed 'Alexandra Mor', with an Alexandra Mor box  ESTIMATE $10,000-12,000 - UNSOLD