Silver. 2 1/2 in. (6.4 cm.) high, 11 in. (27.9 cm.) diameter   Executed by Adrien Auguste Hébrard, Paris. Underside impressed with mark “AH” (the A obscured) separated by an amphora within a lozenge-shaped punch as well as two other indecipherable hallmarks.

LITERATURE: J. Alastair Duncan, “The Silver of Carlo Bugatti,” The Magazine Antiques, December 1989, pp. 1353 and 1355 for similar examples of dragonfly ornamentation; Henry Hawley, The Bulletin of Cleveland Museum of Art, May 1992 pp. 130–43 for a discussion of Bugatti’s silver; Marie-Madaleine Massé, Carlo Bugatti at the Musée d’Orsay, illustrated summary catalogue of the archives and collections, Paris, 2001, p. 132 for an example of another “Dragonfly” ornamented mold

NOTE: “On 15 September 1906, Adrien Hébrard, a founder of artworks, and Carlo Bugatti, a sculptor, signed an agreement by which the latter ‘undertakes to give to A.A. Hébrard all his work both to supply him, in full ownership, with models for silverware, furniture, and any other types of models, and to touch up the waxes of works by his son and other waxes by artists that M. Hébrard entrusts to him’ […] The contract took effect from 1st September 1906, for a duration of three years. “From 1st September to 15 October 1907, Carlo Bugatti exhibited many of the pieces of silverware made by Hébrard at the Salon of Italian Divisionism Painters in the greenhouses of Alma. This exhibition was organized under the aegis of the Dante Alighieri Society, with the support of the Embassy of Italy. The salon brought together young and dynamic artists who were the leading lights of Italian contemporary art. Carlo Bugatti subsequently took part in an exhibition of silver objects held at the A.A. Hébrard gallery in Rue Royale, Paris, from 2 to 25 December 1907. He presented twentyseven pieces out of the sixty on display, his participation accounting for nearly half of the exhibition.”
Marie-Madeleine Massé, Carlo Bugatti at the Musée d’Orsay, illustrated summary catalogue of the archives and collections, Paris, 2001 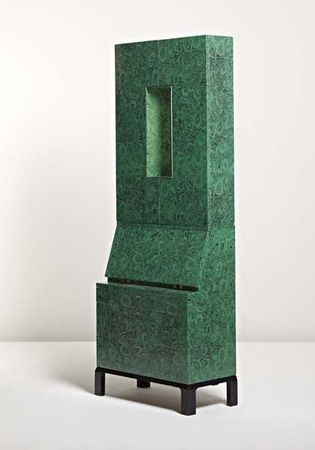 Lithographic transfer-printed wood and metal, painted metal, painted wood, brass, glass.  86 × 31 1/2 × 25 1/4 in. (218.4 × 80 × 64.1 cm.), with writing surface fully extended  Interior of top drawer with plastic roundel impressed with logo and "FORNASETTI/MILANO." Together with a certificate of authenticity from the Fornasetti Archive.

The Fornasetti Archive has confirmed that the present lot is one of only three examples ever produced. NOTE The Grand Hôtel was one of the most modern and prestigious hotels in Brussels. Its restaurant was known as one of the best in the city. In 1897, directly after the international exhibition, the owners commissioned the well-known Art Nouveau architect Paul Hankar to renew the interior design of the American Bar and Grill Room, which opened its doors in 1898.
Phillips de Pury & Company would like to thank Professor Werner Adriaenssens for his assistance in cataloguing this lot.