MUNICH.- As a highlight and to conclude the Alte Pinakothek’s 175th jubilee celebrations, the Bayerische Staatsgemäldesammlungen are staging the first exhibition on Pietro Perugino – one of the most successful artists of the Italian Renaissance – to be held outside Italy. It unites more than 30 works from all phases of the master’s creative output, focussing in particular on the heyday of the artist’s career in the late 15th century. ‘The Vision of Saint Bernard’, an altarpiece completed around 1490 which King Ludwig I of Bavaria, the founder of the Alte Pinakothek, managed to acquire in 1829, was the initial impetus behind this exhibition and forms its focal point.

Although generally underestimated today, contemporaries heralded Pietro Perugino (c. 1450–1523) as the best painter of his generation. Prominent patrons courted his attention even some distance from Florence and Perugia, the centres in which he worked. Popes, cardinals, dukes and wealthy merchants were among his clients. He managed his workshop with astute business acumen, dealing with a surprising number of major commissions for the Church and municipalities in Umbria and Tuscany.

The classical harmony and contemplative mood of his works not only satisfied the aesthetic and religious craving of the times, but also paved the way for the painting of the High Renaissance. Perugino’s works were increasing admired once again in the 19th century and, more recently, art history has attempted to rid the artist of the overwhelming shadow cast by his famous pupil, Raphael. Irrespective of this, the humanist and sophisticated technical qualities of his innovative and sensitive works are worthy of rediscovery in their own right. In addition to the exquisite paintings and drawings by Perugino and his workshop the exhibition also includes related works by the artist’s contemporaries and testimonies to how positively his art was received. Many major collections of paintings and prints in Europe and the USA are supporting this exhibition through the loan of important works. These include the Uffizi Gallery and the Galleria Palatina in Florence, the Galleria Nazionale in Perugia, the Vatican, Museums, the Louvre, The Metropolitan Museum of Art, The National Gallery, London and the National Gallery, Washington, DC, the Nationalmuseum in Stockholm and The State Hermitage Museum in St. Petersburg. The exhibition is being sponsored by the Ernst von Siemens
Kunststiftung.

Pietro Vannucci, known as Perugino, was born around 1450 in Perugia or Città della Pieve in Umbria and probably spent his first few years as an apprentice in Perugia. The experience he gained in the painter and sculptor Andrea del Verrocchio’s circle in the art centre Florence had a profound impact on him. The exhibition opens with outstanding examples of early works from his own hand, including one of the most popular works in the Galleria Nazionale in Perugia – a panel from the San Bernardino cycle – completed in 1473.

In 1480, Perugino was called upon to paint the Sistine Chapel with three colleagues of his from Florence. This prestigious commission from Pope Sixtus IV secured the Umbrian master’s place as one of the leading artists of his time and, a few years later, Perugino chose to establish a workshop in Florence. It was there, as well as in Perugia where he also maintained a foothold, that he completed numerous large-format altarpieces, fresco decorations, private devotional paintings and portraits over the following twenty years.

The altarpiece in Munich depicting the vision of St. Bernard, originally intended for a family chapel in the Cistercian church Santa Maria Maddalena di Cestello in Florence, marks the beginning of his mature work. It forms the focal point of the first part of the exhibition and is outstanding thanks to a harmony in the composition of figures, architecture and landscape that was virtually unsurpassed in Italian painting up until that time. In exemplary fashion, it shows the sensitivity and innovativeness with which the painter furthered the tradition of Florentine and
Central Italian painting in the 15th century. His compositions are governed by a contemplative mood and a calm balance in structure and colouring. Perugino was able to accentuate the aesthetic and spiritual potential of his art, accompanied by Humanist ideals and a new religious orientation, without making a difference between large altarpieces and small devotional pictures.

The exhibition brings together a broad selection of religious pictures made for private use and includes loans from Stockholm, St. Petersburg, London, Florence and Frankfurt, among others, with subjects such as St. Sebastian, the Man of Sorrows and, of course, the Virgin and Child predominating. An exquisite cabinet painting from the Louvre of Apollo and the shepherd Daphnis in an Arcadian landscape – one of the extremely rare testimonies to Perugino as a painter of mythological subjects – has also made its way to Munich. It was probably painted around 1490 for Lorenzo the Magnificent, head of the de’ Medici banking family that ruled Florence.

Several panels from the S. Pietro polyptych, which are otherwise in scattered locations around the globe and which are part one of the largest altarpieces that Perugino completed in his native town in 1495, form a transition to the second part of the exhibition. Here, images of the Madonna and Child form a further highlight and are shown, for example, vis-à-vis an early drawing of the Virgin by Raphael. Perugino’s exceptional talent as a portraitist can also be seen, represented by his most important works, including the famous portrait of Francesco delle Opere of 1494 from the Uffizi Gallery. This work is a particular impressive example of how the master succeeded in incorporating qualities found in Early Netherlandish painting in his art, so admired by his contemporaries.

Perugino’s late work and paintings by his successors – represented by a further altarpiece – document the master’s efficiently organised working method in particular – one of the principle business-orientated qualities that prompted the leading 16th-century historian and artist biographer, Giorgio Vasari, to ruin Perugino’s posthumous fame.

It was not until the 19th century that the painter was once again accorded the recognition that he deserved, although he was principally seen as Raphael’s teacher. The acquisition of works by Perugino for Ludwig I was also largely motivated by the profound admiration shown for Raphael
at that time. The exhibition is rounded off by an in-depth examination of the Umbrian master’s life and art in the 19th century. Examples of German Romantic painting can be seen as well as a drawing by Edgar Degas, among other works. 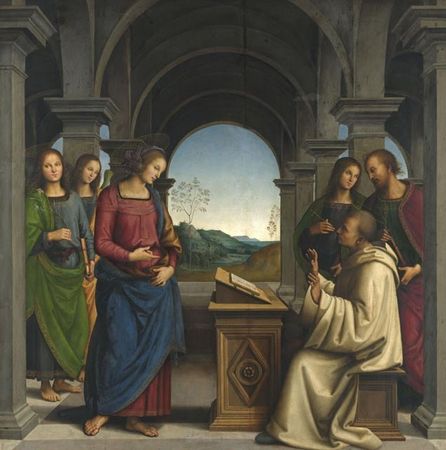