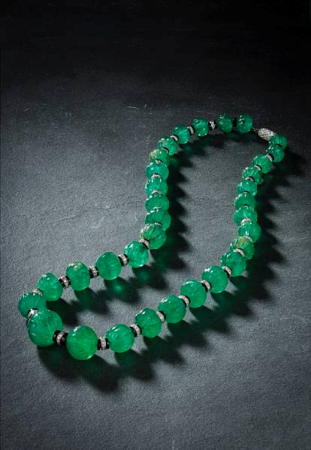 Matthew Girling, the Group Jewelry Director at Bonhams, states about the sale, “The sale showed the underlying strength in the jewelry market. We exhibited the sale in Hong Kong, London and California prior to the sale in New York and we had participation in the sale across the globe.” 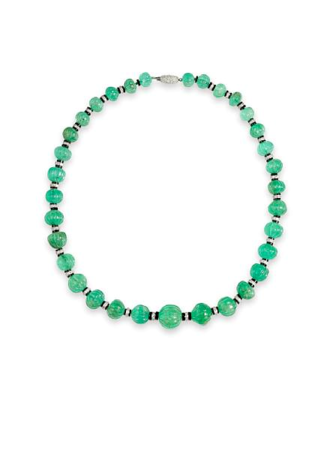 Cartier had a love affair with carved emeralds, as evidenced by their abundant presence in their jeweled art deco creations. This lush green gemstone also reflects the strong influence garnered from the rich and mysterious culture of India.

By the mid 19th century and with the advent of world exhibitions, India's exotic influence began to permeate the jewelry and culture of London. This fascination and preoccupation grew steadily, and blossomed during the art deco period. Indian inspired color combinations and designs appear in the culture, textiles, fashion, art and jewelry of Paris, London and New York.

While Indian jewelry is recorded in the Cartier archives as early as 1872, it is not until the turn of the century at the 1900 Universal Exhibition, that an Indian inspired jewel is created by the house – a double cabochon emerald ring. Ten years later, the Herald Tribune applauds the Persian and Indian designs of Cartier. In 1911, Jacques Cartier's maiden voyage to India proves to be insightful and is important in the evolution of their designs and coincided with the fantastic growth of patronage. Welcomed by the affluent maharajahs, with developed and sophisticated tastes, they entrusted Cartier to re-design their jewelry.

On subsequent trips, not only did Jacques Cartier acquire Mogul ornaments, jewels and objects, but he purchased important stones too. Amongst
the beautiful pearls, rubies and sapphires, it was the emerald that was most highly prized. Emeralds, while commonly associated with Indian jewelry, were not indigenous, and found their way from Columbia via the Spanish trade routes. These stones were cut and carved into naturalistic shapes emblematic of the Islamic culture and were favored by the Mogul emperors. It is these carved emeralds, and later, carved rubies and sapphires, that became important characteristics of Cartier's tutti-frutti jewels.

These spectacular carved emerald creations by Cartier were substantial in size and each unique. They found favor with the elegant and stylish elite, were collected by such luminaries as Marjorie Merryweather Post, Daisy Fellows, Ganna Walsks, the Duchess of Windsor, and with Indian rulers who were pleased to show off their remodeled gems.

The forthcoming art deco necklace of organically carved 'irregular oblate melon-cut beads,' punctuated with black onyx tubes and diamond rondelles serves as an example and pays homage to the potent designs and gems coveted by the India moguls. It also reflects simplicity of the geometric linear design, the very paradigm of the art deco era.

Elsewhere in the auction was property from the Private Collection of Suzanne Crowell. The proceeds made in the sale of their six lots will benefit the mission of Huntington Memorial Hospital, a non-profit medical center that has served the greater Los Angeles community since 1892. Leading this private collection in the sale was a Van Cleef & Arpels 11.59 carat rectangular-cut diamond ring which more than doubled its pre-sale estimate, hammering at $194,500 (pre-sale est. $60,000-80,000), which added greatly to the total of $277,00 made for the medical center. centering a marquise-shaped diamond, weighing 5.06 carats, with tapered baguette-cut diamond shoulders and a plain mount; mounted in platinum; size 5 3/4. Sold for US$146,500