They are following their reputation of being “two scholarly Swiss dealers … highly regarded for their taste and knowledge in the fields of pre-modern calligraphy, painting, and tea ceramics,” and so they are showing among other works the following highlights:

· A landscape with pavilion painting by Ikeno Taiga (1723-1776). This undated landscape probably comes from his last decade and exhibits Taiga’s mature style in its rigorous but idiosyncratic brushwork, combined with sparing application of color and a warm, intimate atmosphere that pervades this and other late works.

· A number of hanging scrolls by “the last great Nanga painter” Fukuda Kodojin (1865 -1944), an artist BachmannEckenstein has handled for many years, and who has become increasingly popular amongst collectors and museums alike.

· A small but exquisite selection of the extremely seeked after and increasingly difficult to find ceramic artist, calligrapher, and poet, Otagaki Rengetsu (1791-1875). 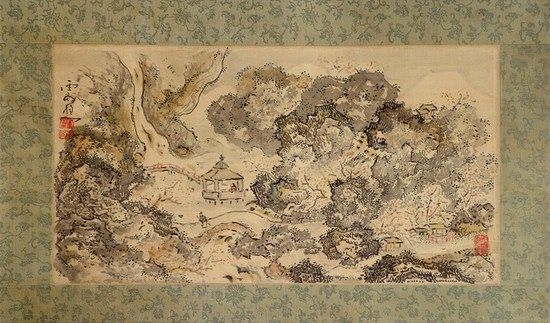