LONDON.- An exquisite solid gold bracelet made over 3000 years ago at the dawn of the European Iron Age will be among the highlights of the Antiquities sale on Thursday 2 May, at Christie’s South Kensington. The heavy gold bracelet is believed to be the only one of its type still in private hands and comes to the market for the first time with an estimate of £40,000 to £60,000. With estimates ranging from £1,000 to £250,000, the sale features superb works of art that embrace the cultures of Egypt, Greece, Rome and the Near East.

The design of the bracelet, made with over half a kilo of high-purity gold, clearly demonstrates the technological advancements of the Iron Age. The new use of iron around 1000 B.C. brought two huge benefits to the goldsmith. Furnaces capable of achieving the high temperatures necessary for iron production provided craftsmen with the technology to melt larger masses of gold than before, while tools made out of the iron itself allowed craftsmen to become increasingly bold and ambitious with their designs. The stunning piece of jewellery, featuring an intricate geometric pattern, was originally discovered in Portugal, part of the Iberian Peninsula where other museum-quality pieces were also uncovered during the mid-20th Century.

Laetitia Delaloye, Specialist in the Antiquities department said: “This Antiquities sale features a selection of stunning artefacts with exceptional provenance. It follows our record-breaking sale in October 2012, where we set a new world record with an Egyptian sculpture of the goddess Isis, which sold for £3.6 million, sparking extreme competition amongst bidders. We are honoured to be offering a second exceptional sculpture on behalf of the same French noble family: the Egyptian granite falcon. Many important lots in this sale have been part of private collections for generations and so have never before been seen on the market. This extraordinary range of items offers both new and established collectors a chance to own a slice of history. The gold bracelet from the Iron Age is a special piece and it is extremely rare for us to see such a detailed example of early Iron Age craftsmanship on the market.” 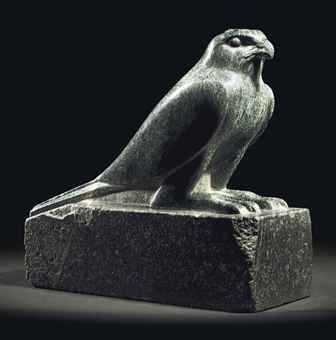 The rare Egyptian granite falcon, made during the 4th Century B.C., is estimated between £100,000 and £150,000. Beautifully carved with smooth lines and realistic modelling, it was originally acquired in the 1840s by a French diplomat in Egypt and has remained in the same family until today. The falcon was an important symbol of power for the kings of Ancient Egypt, as it continues to be today among the Middle Eastern elite. The simple, yet powerful design brings to mind contemporary sculpture and is likely to appeal to collectors of both Ancient and Contemporary Art.

Also included in the Egyptian section of the sale is the Baron Empain collection, including make-up accessories, sandals, amulets and necklaces, which provide a fascinating insight into the every-day life of people living thousands of years ago. Antiquities from the Ancient Roman world are led by a Roman tinned copper cavalry parade helmet, from the late 2nd to early 3rd Century A.D. (estimate: £70,000 – 100,000). The exceptional state of preservation makes this one of the finest cavalry parade helmets ever to have come on the market. Forming an essential part of the Roman cavalry’s attire during equestrian exercises, along with an embroidered tunic and special shield, this helmet was designed to impress spectators and is an emblem of Roman military spectacle and prowess. Equestrian exercises, known as hippica gymnasia provided Roman soldiers with the opportunity to display their skill in front of dignitaries. They would have attracted a host of spectators from elite Roman society, such as the elegant woman represented in the Roman marble portrait (estimate: £30,000 – 50,000). Sculpted in the early 3rd Century A.D, this member of the wealthy elite chose to be captured with an original yet fashionable and ornate hairstyle, immortalising her for millennia to come.