HONG KONG.- The Bonhams Hong Kong 2013 Spring Fine Jewellery & Jadeite Auction held on 25 May at the Island Ballroom of the Island Shangri-La Hotel offers 190 sparks of marvels that will entice collectors and aficionados alike.

Headlining the sale is Lot 1092, a magnificent art deco ruby and diamond necklace, by Cartier, circa 1925, with an estimate of HK$3,000,000 – 4,000,000. Featuring approximately 20.00ct of rubies and 30.00ct of diamonds, the necklace’s linear outline and geometric design are classic examples of the art deco period. This important necklace was illustrated in the book "Bijoux Art Deco" by renowned French author Sylvie Raulet.

The Art Deco period is one of the most popular and enduring design periods in the history of jewellery. The style reflected the flamboyant and playful attitudes of the era and gave birth to forms and motifs that continue to live on today. Defined by geometric forms and bold colours, the Art Deco jewellery style was in sharp contrast to the jewels of preceding periods. Diamonds were extremely popular in the Art Deco period and were often accompanied by the bright colours of rubies, sapphires and emeralds. While the Art Deco period covers the early 1920s through 1935, its influence extends all the way through the 1950s and 1960s and indeed to the current day.

The Cartier ruby and diamond necklace offered at the Bonhams sale bears witness to the iconic Art Deco style and is imbued with the Maison’s savoir-faire. Reminiscent of a work of art, this Egyptian revival necklace features a series of fifteen cushion-shaped rubies graduating in size to the centre, each within a geometric surround of brilliant and baguette-cut diamonds forming a tapering plaque, the back chain of shield and circular linking pavé set with similarly cut diamonds, the largest to the centre.

Commenting on the sale of this important piece, Graeme Thompson, Head of Jewellery for Bonhams Asia, said: 'We are delighted to be offering such a superb ruby and diamond necklace for sale at Bonhams on 25 May. Necklaces of this period are extremely difficult to find, even more so when they are by Cartier, a House synonymous with Fine Jewellery. Without doubt this jewel that exemplifies Art Deco jewellery at its best.'

In addition to the Cartier Art Deco ruby and diamond necklace, other highlights include: Accompanied by a report from Gubelin Gem Lab stating that the 11.47 carat diamond is fancy light pinkish-orange, natural colour and VVS1 clarity. There is an appendix to this certificate stating that the diamond is Type IIa. Report number 0704164, dated 1 May 2007. Accompanied by a report from the Hong Kong Jade & Stone Laboratory stating that jadeite is natural and no resin was detected. Report number KJ 79065, dated March 25 2013. Accompanied by a report from SSEF Swiss Gemological Institute stating that the 8.39 carat sapphire is natural, with no indications of heat treatment and originates from Kashmir. Report number 67245, dated March 13 2013

Accompanied by a copy of a report from GRS Gem Research Swiss Lab stating that the 8.40 carat sapphire is natural, with no indications of heat treatment and originates from Kashmir. Report number GRS2007-082387, dated August 24 2007.

Accompanied by eight certificates from GIA. Accompanied by a report from Gubelin Gemlab stating that the 3.61 carat ruby is natural, with no indications of heat treatment, and originates from Burma (Myanmar). Report number 0003682, dated 29 March 2000. 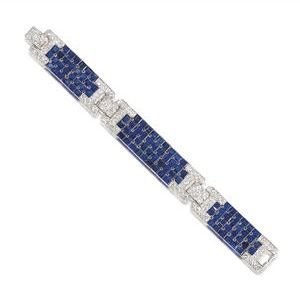 Accompanied by a report of authenticity from Cartier numbered GE2012-6, dated 13th January 2012. Lot 1082 A ruby and diamond ring, by Marcus. Photo: Bonhams.

Accompanied by a report from American Gemological Laboratories stating that the 5.47 carat ruby is natural, with no indication of heat treatment and originates from Burma (Myanmar). Report number CS 51365, dated October 5 2012.