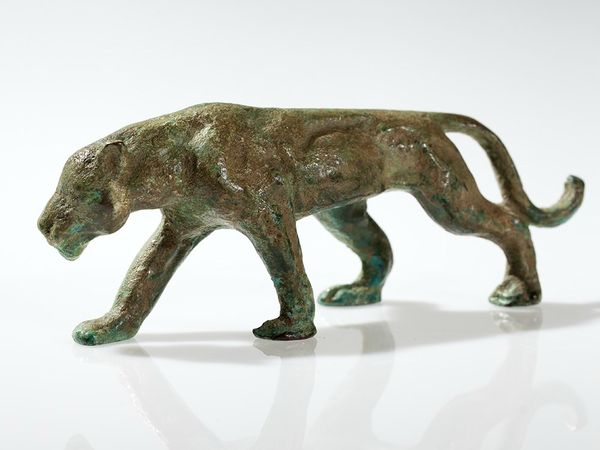 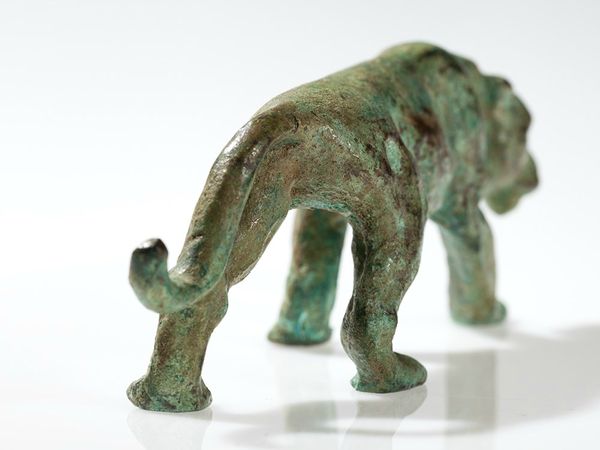 Very good condition
This feline was cast in bronze in later Hellenistic or early Imperial periods, ca. 1st C. BC - 1st C. AD.
The pacing lioness is beautifully modeled with fine feline features which appear incredibly naturalistic.
The large feline - a lioness or panthress - (pantera being the Latin word for a large feline) moves slowly forward. Her body is rather thin; the rib-cage is outlined.
The animal is slightly crouched, its right leg is advanced, the body is gently curved to the right, the head is lowered as if following a scent.
The ears are at attention, the muzzle seems somewhat drawn back, some of the very fine details still shine through the patina.
The eyes are large and deeply set as is customary with such animals.
The long tail is curving slightly.
The muscles are given in large by the artist, with compact details throughout, emphasizing the distinct segments of the body, for example the hollows in the haunches, the strand along the rib cage etc.
The legs have been treated as rounded elements with relatively little detail, some sinews, and the paws with minimal anatomical correctness but conveying the power and strength.

The bronze is complete and in good condition. Some minor abrasions are visible and there might be a possible loss of details at tip of tail.
The green ' Malachite' patina is irregular in places, but overall in remarkably good condition. Surface details somewhat worn but still discernible (snout, surface of body, haunches etc.).
The object seems to have been worked on AFTER its creation and at an unknown time.
Then the underside of the belly has been flattened (filed?) which cut into the fringes of thick fur along the sides of the belly.
The alteration is, however, minimal and does not diminish the impression of this powerful, small scale animal sculpture.
The feline is in very good condition, the dimensions are 15 x 3.5 x 5.5 cm.

Chronology and Technique
The realistic impression that the lively surface-work conveys speak for a later period than conventional Etruscan.
The object was created in the later Hellenistic or early Imperial periods, ca. 1st c. BC - 1st c. AD.
The bronze has been solid cast, cold work. Originally fastened to a larger object such as a chair, box etc. Separation from ground visible underneath paws.