PROPERTY FROM A SPANISH PRIVATE COLLECTION

Provenance: In the collection of family of the present owners for several generations.

"Now from the sixth hour there was darkness over all the land unto the ninth hour.
And ...Jesus cried with a loud voice, saying, Eli, Eli, lama sabachthani? that is to say, My God, my God, why hast thou forsaken me?"
(Matthew 27:45-46)

Against a jigsaw of jagged-edged clouds, rising ever denser into a thunderous mass of gloom, hangs the crucified Christ, flanked on either side by a thief in three-quarter profile. Beneath them crowd an impossible arrangement of figures, lovers, loathers, and the merely curious. In their amorphous arrangement Cranach manifests a blatant disregard for visual perspective, indeed of any understanding of space whatsoever; his interest, instead, lies in the attainment of the greatest possible visual impact. Thus piled on top, and squashed up against, one another are a cacophony of moustachioed and bearded onlookers, families and soldiers clad in armour, their spears and axes breaking the horizon formed by the tops of the myriad of heads, hats and helmets. As an exercise in perspective it is a peculiarity that works neither from below nor above but which achieves the effect of an uproarious denouement of shock, anger, gloating and motherly anguish. 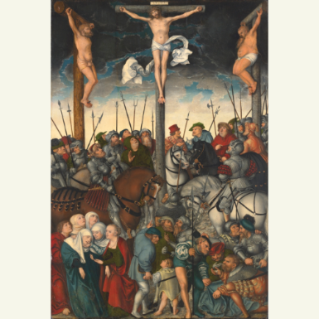 The formula, in fact, varies little from that of Lucas Cranach the Elder’s Crucifixion of 1538 in the Art Institute, Chicago1 (fig. 1) which itself is the culmination of over twenty years’ worth of compositional evolution, starting with the Dürer-esque 1503 Crucifixion in the Alte Pinakothek, Munich which shows the scene side on.2 Next is the now frontal but meagrely populated work of 1515-20 in the Städelsches Kunstinstitut, Frankfurt,3 and the central panel to a triptych formerly with Goudstikker,4 both of which are still spatially legible. Then comes the now perspectively defunct panel of 1532 in the Indianapolis Museum of Art, Indiana5 and finally the culmination in the Chicago panel. The later of these works, and particularly those in Chicago and Indianapolis, are characterised more and more by the effervescent sky that so dramatically sets off the three crucified figures in the younger Cranach’s interpretation. This version is, too, of the same dimensions as the Chicago panel and of several other treatments by the younger Cranach, namely those in the Gemäldegalerie, Dresden and the Anhaltische Gemäldegalerie, Dessau. 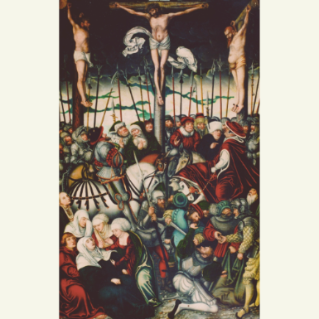 Another version to which the present lot closely corresponds is in the Museo Lazaro Galdiano, Madrid, though that version is no longer unanimously considered an autograph work by the elder Cranach (fig. 2).

Each of the other versions, by both father and son, show the thieves’ crosses at the extreme left and right margins; here however Cranach has, in modern parlance, ‘zoomed out’ so as to push them to the centre, allowing him to include ever more foreground and even more figures. The figures are vastly more numerous here than in all other versions, and animated and characterised beyond those of all precursors. We see here the emergence of the artistic personality of Lucas Cranach the Younger who, by the time this was most likely painted, in the late 1540s or 1550s, was in sole charge of the Cranach workshop and enterprise in Wittenberg. Gone is the slavish imitator of the elder Cranach, replaced by an artist driven by his own volition. Though always founded in his father’s idiom, his mature work soon finds its own idiosyncrasies; Cranach steps out of the paternal shadow to form his own artistic language and style.

Such a large and highly detailed panel would inevitably have been completed with a degree of workshop assistance and here some figures are clearly better conceived than others. Dr. Dieter Koepplin concurs with a dating to the artist’s maturity and likewise considers elements of the painting executed by an assistant. Conversely, Dr. Werner Schade dates the work much earlier, to before 1515, noting the archaic setting and the use of a number of strange mediaeval elements such as the ray-like aureoles emanating from Christ, the Virgin and St. John. Furthermore, he argues that the juxtaposition between the Penitent and Impenitent thieves, which becomes the standard iconography for the scene of the Crucifixion at a later date, is not yet applicable in this work. On the basis of photographs, Dr. Schade has identified certain parts, such as the thief on the right, to have been executed by Lucas Cranach the Elder. The large majority of the composition however he attributes to a talented member of the master's workshop.