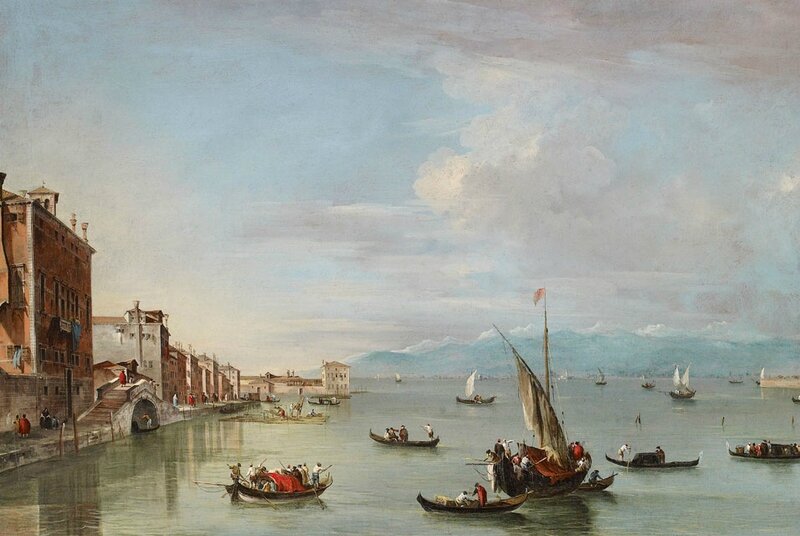 OXFORD.- The Ashmolean announced the acquisition of an enchanting early view-painting by Francesco Guardi (1712–1793): Venice: the Fondamenta Nuove with the Lagoon and the Island of San Michele. Dating to c. 1758 and made for a British Grand Tourist, the painting is a masterpiece by Guardi, previously unpublished. The acquisition has been made possible by the Arts Council England under the Acceptance in Lieu of Inheritance (AIL) scheme, together with a generous grant from the Art Fund, and, amongst other donations, contributions in memory of Jo Wilson and from the Sir Denis Mahon Charitable Trust.

Born into a family of painters in Venice, Francesco Guardi painted altar-pieces, devotional works and genre subjects, but is best known for his views (vedute) of Venice, which had become his main activity by about 1760. He was inspired by the sketchy brushwork of artists such as Marco Ricci, Michele Marieschi and his brother-in-law Giambattista Tiepolo, and by the luminosity of Canaletto’s views. Guardi often took Canaletto’s compositions as a starting-point for more impressionistic paintings. He was praised in his lifetime for his ‘magical effects’ in paint.

Guardi’s views of Venice became especially popular with British visitors to Italy, and this view of the Fondamenta Nuove was made for a Grand Tourist in about 1758 when the artist was establishing his reputation in a new market. Rather than painting familiar scenes of Venice’s splendid architecture and festivities, Guardi captured its magical character as a city rising from the water. British travellers admired Venice as a maritime city that built a trading empire despite its fragile urban setting of mud-flats in the lagoon. Arriving in Venice by boat, visitors were fascinated by everyday life in a city whose streets and alleys were canals. This ambitious painting is one of a group of Guardi’s early lagoon views that are entirely original, not based on compositions by Canaletto or other artists. The brushwork is brilliantly fresh and fluid, with dabs of pigment building up a sense of form, and adding animation to the small figures. The treatment of the glassy, rippling waters with their reflections is especially beautiful. The distant snow-capped mountains, rarely visible owing to Venice’s hazy atmosphere, close off the shimmering lagoon vista.

Professor Christopher Brown CBE, Director of the Ashmolean, says: “This painting brings to the Ashmolean a poetic masterpiece in which Francesco Guardi reveals his full artistic potential. As the first major Venetian view-painting to enter the Museum’s collection it makes an inspirational addition to the Britain and Italy Gallery. We are profoundly grateful to the Arts Council, the Art Fund, and other supporters for making this acquisition possible.”

Sir Peter Bazalgette, Chair of the Arts Council England, says: “The fact that this stunning painting has been largely unseen by the public before now demonstrates the importance of the Acceptance in Lieu scheme. Many members of the public will now have the chance to view and interpret this important piece at the Ashmolean when its fate could very easily have meant that is was lost forever from history.”

Dr Stephen Deuchar, Director of the Art Fund, says: “The Art Fund has been helping the Ashmolean to add outstanding works of art to its collections for nearly 100 years. We're thrilled that the Museum has now raised the funds to acquire this beautiful and important Guardi.”