ALAMEDA, CA.- June 22, 2015 became a day of establishing records at Michaan's, as the Fine Asian Works of Art auction broke new sales ground. The auction’s star highlight, Fu Baoshi’s (1904-1965) hanging scroll Lady by the Bamboo, did not disappoint as it set a new U.S. auction record for the artist, realizing a price of over 7 times estimations. The painting by the revolutionary Chinese artist stemmed from the estate of Mr. and Mrs. David Galula and was secured by a Chinese buyer based in New York. A final floor bid cemented the sale of the coveted scroll to the tune of a handsome price realized of $1,410,000, becoming Michaan’s single highest selling painting to date (lot 6222, $150,000-200,000). Asian Art Specialist Mr. Harry Huang realized the artwork’s potential to break the million-dollar mark and was “…greatly pleased, although not entirely surprised…” by the result. 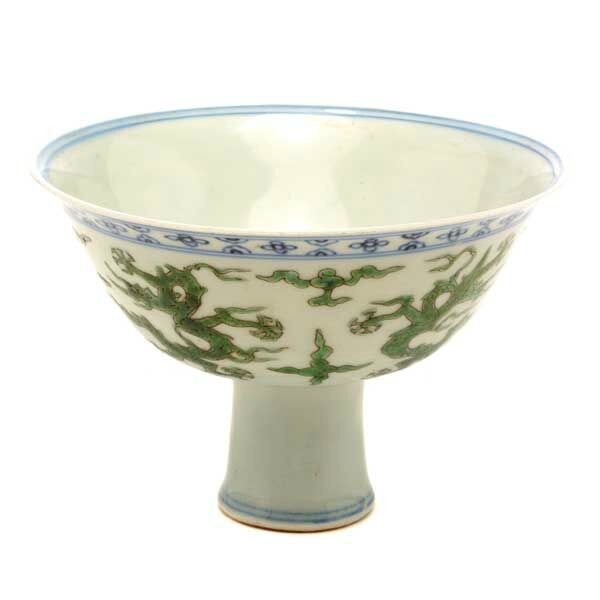 A reticulated white jade plaque sold as lot 6011 proved to be a sleeper hit with bidders, realizing over 9 times given estimates ($4,000-6,000). The 18th century piece stands as the top lot from the jade and hardstone carvings portion of the catalogue, admired for its even white hue and fine, auspicious, openwork carvings. An Internet buyer in China placed the winning bid for the plaque whose sale ended at a whopping $56,050. 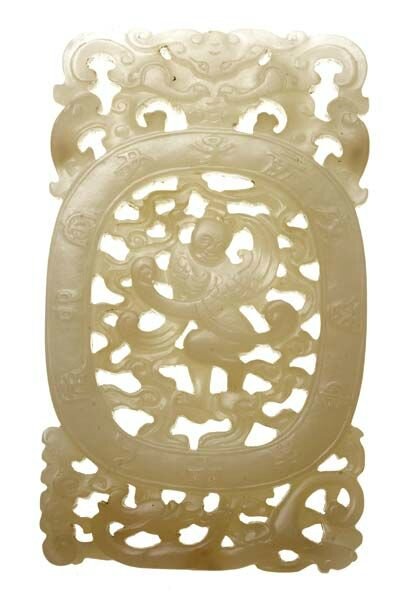 Finely carved in openwork with a winged Daoist figure amidst scrolling clouds, with dragons to the top and the bottom, the front with a twelve-character inscription arranged in a oval, the reverse with the eight trigram symbols similarly arranged, the semi-translucent stone of an even white tone. Length: 3 1/2 inches (8.9 cm). 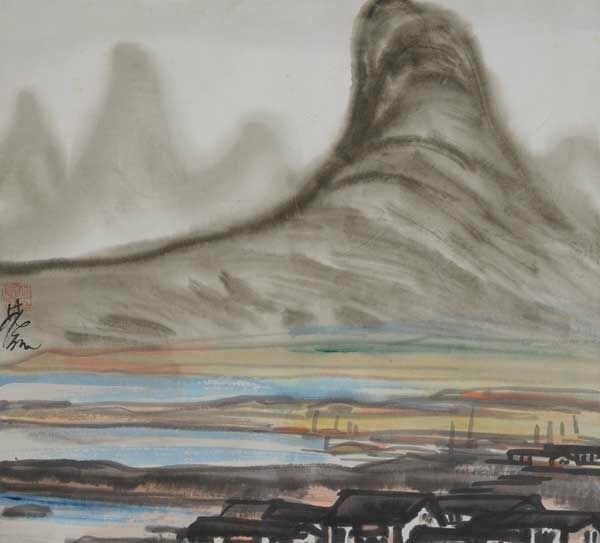 Both painted with two sinuous dragons chasing flaming pearls among ruyi scrolls above a ruyi lappet band around the foot, the shoulder displaying the eight Buddhist emblems. Height: 7 7/8 inches (20 cm) each.

The first with rounded sides rising on a straight foot, the exterior covered in a raspberry-red glaze pooling to a darker tone around the foot, the interior and the base glazed white, inscribed to the base with a Yongzheng six-character mark within a double-circle; the second is a deep bowl supported on a short slightly flaring stem base lightly molded with a horizontal rib, the exterior under a deep red glaze, the interior white, inscribed to the recessed base with a Yongzheng six-character mark in seal script, wood stand. Widest: 7 3/8 inches (18.6 cm) Heavily potted and with rounded sides, the interior carved in the center with trellis diaper below a band of peony scrolls, the exterior left plain, covered overall in a thick olive-green glaze pooling in the recesses. Diameter: 18 3/8 inches (46.7 cm)

Decorated with an interior scene of various characters from the “Romance of the Three Kingdoms” novel, and boys at play on the ribbed neck. Height: 17 1/2 inches (44.4 cm). 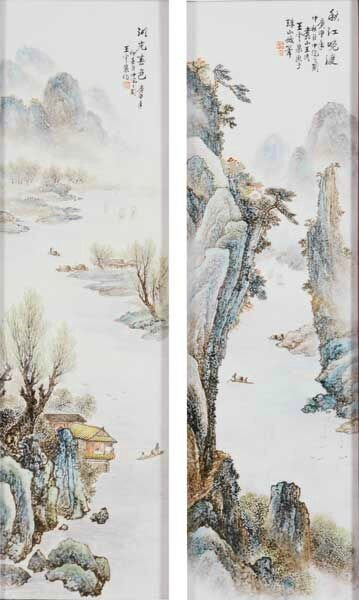 Each depicting a meandering river through a gorge filled with lush vegetation, populated with people in cliff side architectures and rafts on the river, titled, dated to 1980, inscribed, signed and with seal of the artist, within wood frame. 29 1/4 x 8 1/4 inches (74.3 cm) each excluding frame.

Of the textiles at sale, a Tibetan painted Buddhist silk scripture from the Qing dynasty stole the spotlight at over 10 times estimations, selling for $20,060 (lot 6104, $1,500-2,000). An East Bay floor bidder snapped up the religious artwork of numerous auspicious symbols, including Buddhist dragons and Snow Lions. Three other textiles in the sale sold above estimates as well, continuing to add to the auction prosperity (lots 6124, 6126, 6127).

Designed as a wall hanging and painted with a Tibetan inscription between pairs of Buddhist dragons and snow-lions, all below a large parasol flanked by banners, with a colorful silk panel covering the front depicting auspicious symbols. 59 x 25 inches (150 x 63.5 cm) approximately.

Further collectible works of art and decorative items proved popular with bidders, delighting with their novelty at auction. A gilt bronze weight depicting a recumbent stag sold for over 4 times estimates for $20,060 (lot 6094, $3,000-5,000) and a jade snuff bottle carved in the form of a pebble realized a price of over 5 times the high estimate at $16,520 (lot 6061, $2,000-3,000). Representing the breadth of successful property at sale is a carved amber snuff bottle at over 3 times projections (lot 6062) and an aloeswood wine cup (lot 6071) as well as a zitan wood censer (lot 6075) more than doubling estimates. Shown in a recumbent position with legs tucked underneath its body and head turned backward, designed with a pair of gently curing antlers and incised details, the underside bearing a reserved Chenghua four-character mark. Length: 4 1/4 inches (10.8 cm) approximately.