Klimt and the Ringstrasse: A Showcase of Grandeur opens at the Belvedere in Vienna

Klimt and the Ringstrasse: A Showcase of Grandeur opens at the Belvedere in Vienna VIENNA.- During the boom years of the Gründerzeit, a profusion of palaces and grand public buildings was built around Vienna’s magnificent boulevard, the Ringstrasse. In summer 2015, the Belvedere’s exhibition Klimt and the Ringstrasse – A Showcase of Grandeur focuses on the charismatic Ringstrasse painters who shaped their era. Starting with the oeuvre of the “painter prince” Hans Makart, the exhibition traces developments up to the triumph of Gustav Klimt and his painters’ collective, the Künstler-Compagnie. Reconstructions of entire decorative ensembles present glimpses of the glittering lifestyle in the Ringstrasse era to visitors.

Gustav Klimt, The altar of Dionysus (design for the ceiling paintings in the Burgtheater in Vienna), 1886. Oil on canvas, 32 x 158 cm © Bank Austria Art Collection, Vienna

The Vienna Ringstrasse is one of the most striking ensembles of architecture in the city and a fundamental part of the World Heritage Site, the “historic centre of Vienna”. Its construction in the late nineteenth century expressed Vienna’s claim to be the sole centre of the Austro-Hungarian Empire. At the same time it documented the empire’s status as a major political power on the European continent. Building began in the 1860s but was only largely complete when World War I broke out. With the Ringstrasse, Vienna presented itself as a new, dynamic, and prestigious centre of trade and commerce.

Gustav Klimt, Portrait of a Woman, around 1894, permanent loan from a private collection, © Belvedere, Vienna

The Ringstrasse reflected the monarchy’s aims to modernize Vienna, and its architecture encapsulates the transition from a medieval city to a modern, industrial metropolis. On the one hand, buildings like the Burgtheater or the Naturhistorisches and Kunsthistorisches Museum demonstrated the monarchy’s claim to cultural leadership while the Neue Hofburg presented the political power of the Habsburgs. On the other, the wealthy bourgeoisie’s town palaces, Parliament, the Stock Exchange and the Musikverein all express the self-conception of upper-middle-class society as a new economic and cultural power. One can read the Ringstrasse’s architecture as a reflection of this dual function of culture: for the imperial family it was a symbol of political authority; to the wealthy bourgeoisie it represented commercial power. Accordingly, the buildings’ decorative schemes can be interpreted as an expression of the cultural self-conception of their respective patrons. 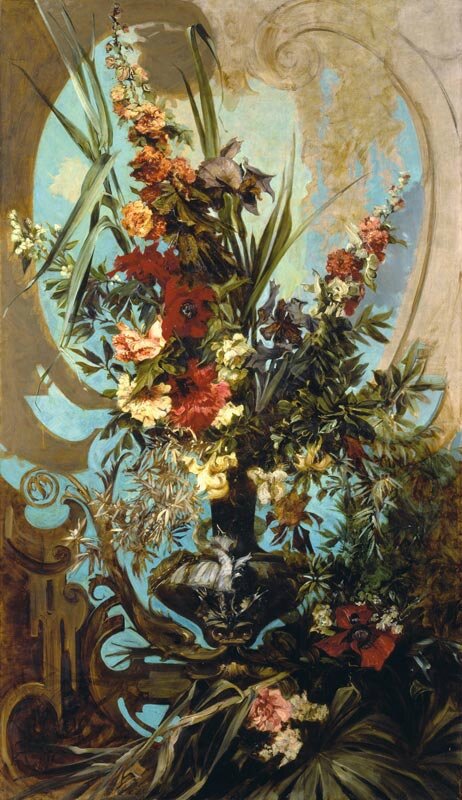 Decorative schemes for public buildings and private apartments enable comparison between different artistic approaches while objects convey stylistic change and continuity. The exhibition showcases works from the Carl Rahl school (specializing in history painting), the magician of colour Hans Makart, and the young emerging painter Gustav Klimt. Represented by early reference works, Klimt marks both the culmination and conclusion of painting during the Ringstrasse period. Nowadays the term “Ringstrasse period” conjures up the ideal of a romanticized past. Marking the 150th anniversary of its opening, the Belvedere’s exhibition is thus aiming to visualize this transformation in art during the construction of the Ringstrasse that lasted over 50 years. For ultimately, constant change, discrepancy and continuity are the hallmarks of this period of rapid industrialization, which affected all areas of life from the economy and politics to society and art.

The exhibition features paintings to decorate the Burgtheater and the Kunsthistorisches Museum, designs for the magnificent rooms at Palais Epstein, Makart’s painting for Nikolaus Dumba’s study, some of the embellishments for Dumba’s music room by Gustav Klimt and the Künstler-Compagnie, and furnishings belonging to Makart. Objects owned by patrons such as Friedrich von Leitenberger and Nikolaus Dumba are being presented as well as precious pieces from the Bloch-Bauer family’s collections. The exhibition unveils a differentiated view of an epoch that, using new means of industrial production and reproduction, in many ways surpassed the possibilities of craftsmanship and was in quest of a new canon of values in art. Eduard Bitterlich, The Dance of the Muses (carton for the ceiling in the ballroom of the Palais Epstein), 1871-1872. Charcoal on light brown construction paper, 79.5 x 237.4 cm © Academy of Fine Arts Vienna, Kupferstichkabinett

Eduard Bitterlich, The Dance of the Muses (carton for the ceiling in the ballroom of the Palais Epstein), 1871-1872. Charcoal on light brown construction paper, 79.5 x 237.4 cm © Academy of Fine Arts Vienna, Kupferstichkabinett Commentaires sur Klimt and the Ringstrasse: A Showcase of Grandeur opens at the Belvedere in Vienna