MADRID - The Museo Thyssen-Bornemisza is hosting Edvard Munch. Archetypes, the first exhibition to be held on the Norwegian artist in Madrid since 1984. Organised with the generous collaboration of the Munch-Museet in Oslo, the show brings together a selection of eighty works by the artist, who is hailed today as one of the fathers of modern art along with Cézanne, Van Gogh and Gauguin.

The latest publications and most recent exhibitions have succeeded in freeing Munch of many of the stereotypes to which he has been subjected in order to show him not only as a universal symbol of the anguish and alienation of the modern man but, above all, as a key creator in shaping contemporary artistic sensitivity. Curated by Paloma Alarcó and Jon-Ove Steinaug, Edvard Munch. Archetypes aims to follow the same path, focusing on the most unknown aspects of his creative force and ability to synthesise contemporary man’s obsessions.

Although Munch never abandoned figurative art, he broke away from the visible world and explored the hidden spiritual dimension of reality in order to immortalise the most universal themes of life, love and death through an innovative artistic language that evolved from symbolism to expressionism.

‘Against the current of the modern style’
Closely linked to the literary and artistic circles of his day throughout his lifetime, Edvard Munch contributed with his oeuvre to the advancement of modernity that took place in all areas of European culture in the late nineteenth century, together with prominent figures such as Norwegian dramatist Henrik Ibsen, Swedish writer August Strindberg and German philosopher Friedrich Nietzsche.

Much’s art stems from a particular mixture of artistic traditions, progressive literary trends and esoteric speculations – not to mention Nordic myths – with which he creates a modern mythology with a determined experimental approach ‘against the current of the modern style’, as he stated. Using archetypes, primeval images of human behaviours, Munch succeeds in establishing multiple relations between the external signs of the physical world and the most hidden spiritual dimension.

Existential obsessions such as love, desire, angst, jealously, illness or death, and moods such as melancholy, loneliness or submission are shown in his work through the bodily attitude of the figures, who are paralysed in a sort of static tension at the precise moment when their gesture expresses the feeling they are intended to represent, and also determine the setting or spatial treatment of the composition. The flat, sinuous forms, symbolic colour, expressive distortion of the body and the use of experimental engraving textures and techniques are also essential elements of his artistic vocabulary.

‘Art comes from one human being’s compulsion to communicate to another’
The painter seeks to question the spectator with these direct, dramatic and intense images which attract and hold our attention. The forms and means of the artistic language should be subordinate to its ability to communicate and it is from this desire to reach as many people as possible that another of the essential aspects of his work springs: the obsessive repetition of thematic sequences; a perpetual recycling of images, which he reworks in different media, pushing the boundaries of traditional techniques in an unorthodox manner and experimenting with them to give rise to new meanings. Indeed, repetition is one of the basic features of the concept of archetype.

A long and prolific career
The exhibition brings together a total of  eighty works – many of them never previously shown in Spain – which span the Norwegian artist’s long and prolific career. Half of the loans are from the Munch-Museet in Oslo and the rest belong to other prestigious institutions from all over the world, such as the Kunsthaus in Zurich, the Kunstmuseum in Basel, Tate London, the MoMA in New York and the National Gallery of Washington, as well as a few international collections such as the Museo Thyssen-Bornemisza, the only one in Spain to own works by Munch both in its permanent collection and on deposit from the Carmen Thyssen-Bornemisza Collection.

The exhibition layout is based around this large repertoire of emotional archetypes (melancholy, love, death…) and the various settings in which they are depicted (the coast, the sickroom, the abyss, the forest, night, the artist’s studio), combining early works with later versions, graphic work and paintings throughout the show in order to underline the thematic and existential circularity of his oeuvre.

Melancholy:
Influenced by impressionism and, above all, the symbolism of some turn-of-thecentury artists, Munch soon eschewed the naturalist trends of his formative years and broke away from all the artistic and social conventions of his day. In addition to an early landscape painted outdoors, this section brings together key works for understanding the painter’s future evolution, such as Evening (1888), which shows his sister Laura, who later suffered from mental illness, alone and selfengrossed. From this point onwards Munch shifted towards a formal reduction of the landscape and the faces of his figures gradually lost their features. Evening. Melancholy and its successive versions and Mother and Daughter and the Solitary Ones, from different periods, are examples of the new artistic, symbolic and poetic language that heightens the emotional intensity. The impressionistic technique that is still evident in the portrait of Laura is gradually replaced by a synthetic language of undulating brushstrokes, while the clashing colours and marked two-dimensionality distance him from the objective impressions of earlier art and convey subjective concepts. Death:
‘Disease and insanity and death were the black angels that stood by my cradle’, stated Edvard Munch, who nevertheless viewed them as an allegory of creativity. The painter regarded physical and mental deterioration as a state in which the aesthetic imagination could surpass the boundaries of reason and give rise to experimentation.

‘Most of what I have done since had its genesis  in this picture’; the Sick Child and its many variations in both painting and engraving are the embodiment of the existential feeling of fear of death and show this open creative process in which each version ‘contributes something to elicit what I felt during the first impression’. 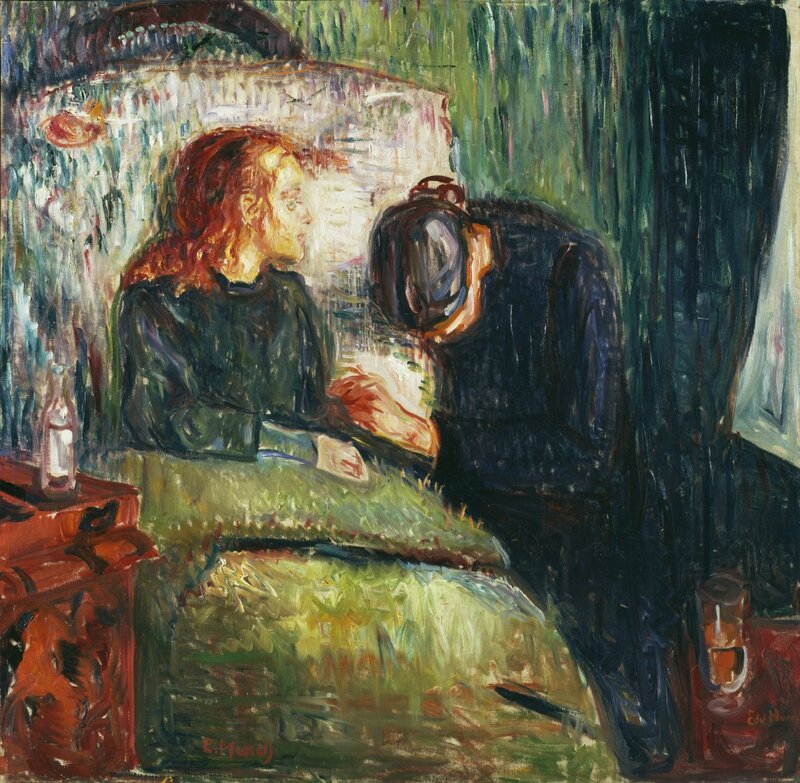 Death in the Sickroom (1896), with its theatrical setting imbued with drama and grief, and Agony, in which he represents the physical experience of death in his sketchy technique of large, expressive patches of colour, are some of the iconic works on view in this section. Panic:
In parallel with the scientific and technological innovations of the second half of the nineteenth century, the new, crowded urban environment changed modern man’s perception of his relationship with the world. Anguish, anxiety and uncertainty suddenly replaced old ideals and convictions. Munch was terrified of crowds and found the city traumatic – a place of stress and agitation where man was subjected to many negative experiences.

The lithographic version of The Scream on view in the exhibition contains all the existential anguish of the original work, in which a beautiful leisure space is transformed into a scene of disintegration and destruction of a rational order, and the sinister figure with a skull-like head grimacing in horror desperately seeks our gaze, while covering his ears to blot out the sound of the deafening shriek that surrounds him. Other engravings and woodcuts on display in the gallery, such as Angst, Panic and Panic in Oslo, represent visual dramas with terrified figures who are swept along by the anonymous, anguished seething crowds in the city’s streets. Woman:
Munch made women the centre of his pictorial universe. Woman (1925) represents three stages in the biological process of women’s sex life: the femme fragile, the femme fatale and the mature woman. A synthesis of his conception of women based on these two opposite archetypes would be repeated throughout his oeuvre: the idealised woman (femme fragile) and the demonised woman (femme fatale). The first – the ideal, chaste and delicate woman – is found in Puberty (1914–16) and Summer Night. The Voice (1894), works with which Munch succeeded in establishing an unparalleled paradigm of the awakening of sexuality in women, creating a model that would later be imitated by artists such as Schiele, Kirchner and Picasso; and the other image of the seductive, threatening and dominating women appears in works such as the Woman with Red Hair and Green Eyes. Sin (1902). Melodrama:
The theatre of Ibsen and Strindberg influenced the composition of some of the Norwegian artist’s paintings, as can be seen in the Green Room series. The figures appear to be on a small stage, converted into actors moving before us with distorted expressions of anxiety and pain or in an introspective attitude. The space is stifling, with a cluttered interior decorated with wallpaper and overly large furniture, accentuating the sensation of claustrophobia.

Jealousy, in its various painted or lithographic versions, brings male and female figures face-to-face with the spectator, once again showing him to be in tune with his friend Strindberg, who also dealt with the subject in his writings and in a painting; for both, the experience of love stimulates feelings of jealously, anguish, uncertainty or despair. Love:
In most depictions of love in Munch’s oeuvre there is a certain delight in this dark side of feelings. Such is the case of The Kiss, of which there are several versions in this gallery, and in which the intertwined figures gradually lose their identity, from the earliest compositions in which the two figures appear kissing passionately by a window, to graphic versions showing the total symbiosis of the lovers in an abstract form. 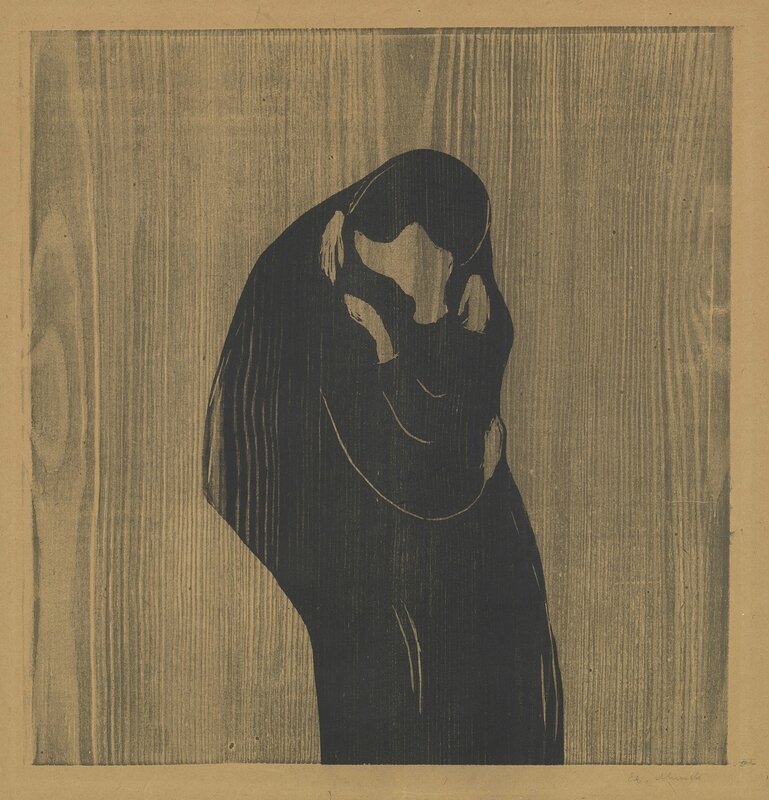 The versions of Vampire display a perverse sensuality, with the naked figure embracing its victim, a man in a submissive position enveloped by her long red hair as she saps his vital energy; and the kiss turns into a bite and the symbol of possession, both physical and psychological. Nocturnal scenes:
Taking as a point of departure the landscape as a reflection of emotional tension, Munch’s night scenes have an even more accentuated psychic content thanks to their full repertoire of signs such as shadows, trees and rocks, which stand between vision
and sensorial perception, between the outside and inner worlds.

The simplification of forms and intense interplay of backlighting lead spectators to focus their attention especially on the picture surface. In Under the Stars (1900–5), the lovers embrace on a dark, starry night of floating shadows; and in Winter Night (1900–1) and The Red House in the Snow (1925–26), the trees appear to emerge from the unconscious and the shadows create a sensation of concern and restlessness. 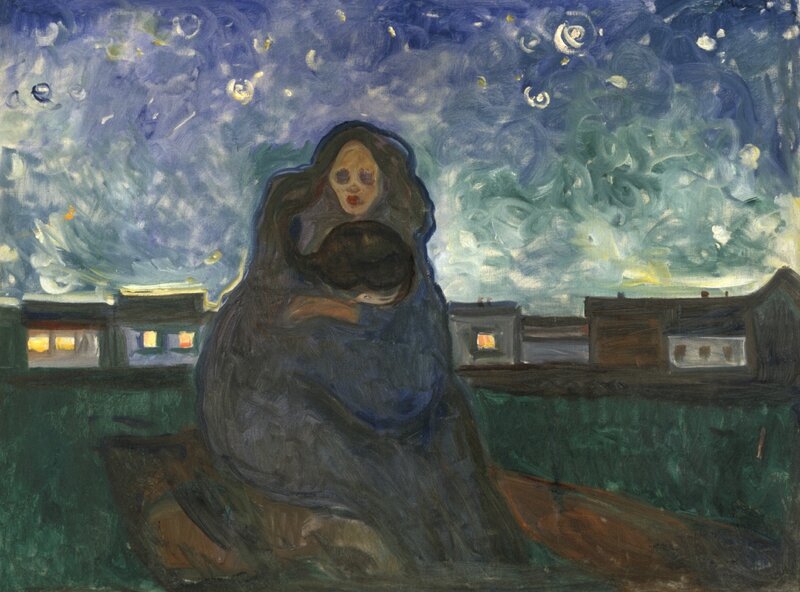 Vitalism:
Edvard Munch returned to Norway in 1909 after a long voluntary exile in France and Germany. A nationalist and harmonious feeling and the wish to rethink his art gave rise to a new creative period that led him to focus on more earthly subjects and produce more heroic and vitalist works in a colourful and monumental style with new motifs such as working the land, rural scenes and the seasons.

The Apple (1921), Adam and Eve (1909) and Girls on the Pier (1933–35) are a good example of this new creative side. Many of these compositions feature the image of the tree, robust specimens that express vital force and symbolise the metabolic chain of life; a perfect blend of the role of the tree in Nordic mythology – the Vikings regarded it as the centre of the universe – and Christian tradition, in that it represents both the world before the fall and temptation. Nudes:
By converting his figures into personifications of passions and feelings, Munch uses the human body to formulate these emotions and many of the nude figures found in his paintings thus bear little relation to the pictorial problem of depicting the nude. However, in the works with single figures, often based on studio models, Munch plays with the optical and tactile corporal qualities of the nude, giving priority to the sensual and convulsive beauty of the body over the emotions; this can be seen in Crying Female Nude or Kneeling Female Nude. 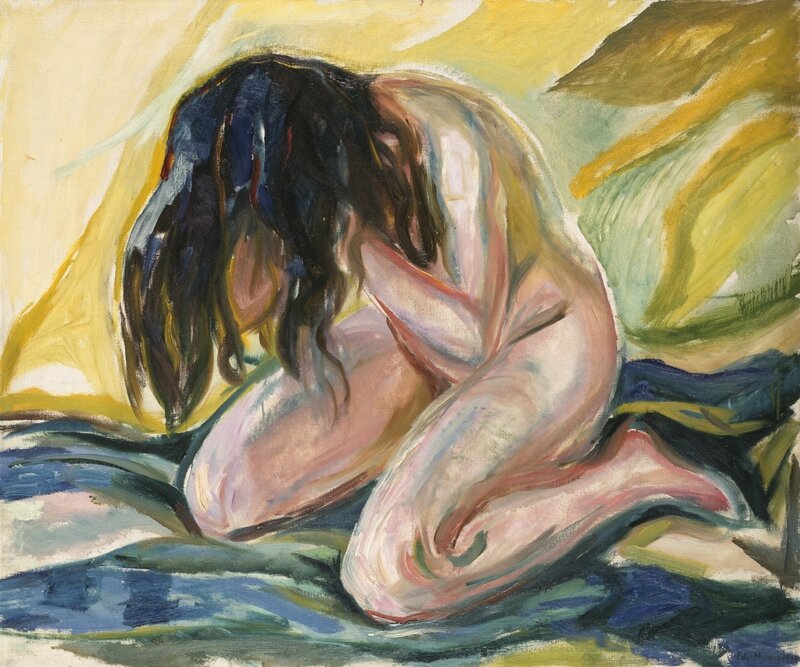 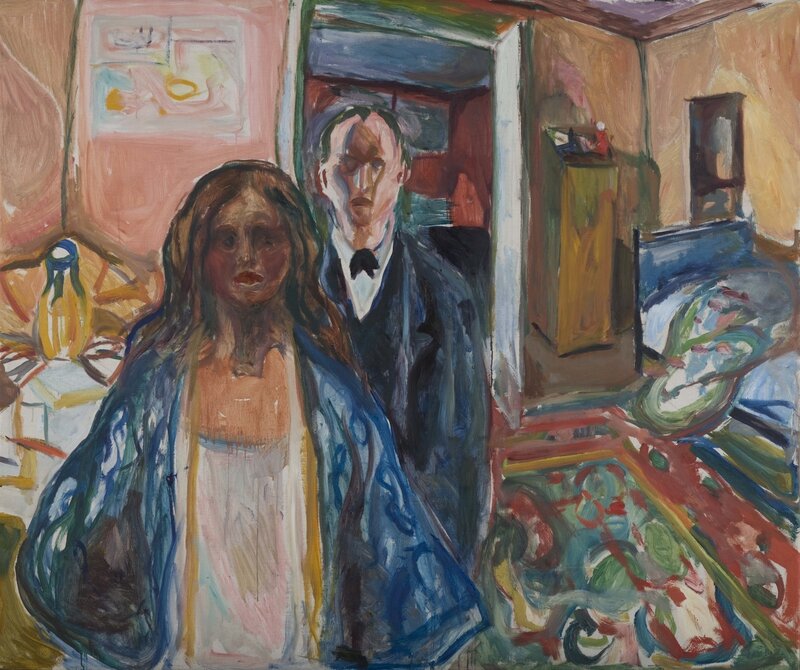