Chinese Porcelains
The Chinese porcelains include Famille Rose, Caledon, Zisha, and Blanc de Chine from the Yuan Dynasty through the Ming, Glazes run from copper red to wood grain, flambé and purple splash, creating a compelling inventory for collectors.

The marquee item is Lot 138, a Yuan dynasty dragon jar with a rare copper red underglaze that depicts a three-clawed dragon among flames chasing a flaming pearl. Standing 12 ¾ inches tall, the pear-shaped vase is $200,000-$400,000.

Meanwhile, mid-level collectors will be well pleased with Lot 234, a Ming Dynasty bovine blood-red stem plate that carries the Xuande six-character mark and is of the period. It is $6,000-$10,000.

Entry level collectors will appreciate Lot 236, a copper-red ewer sculpted with florals and insects, valued at $1,500-$3,000.

Another highlight is Lot 150, a Qing Dynasty Famille-Rose white enamel plate with brightly painted wasps and butterflies. Of the period, bearing the Qianlong four character mark inside a double blue square, the 7 ½ inch plate will go for $200,000 - $300,000. The interior of the shallow plate curving to a slightly everted gilt lip, is delicately painted with circular register of animated wasps in varying position interspersed with butterflies, all picked out in gray, green, black, yellow, blue , pink and aubergine enamels, the interior glazed white.

The blanc de chine highlight is Lot 144, a pair of Yuan Dynasty vases with fish handles, their bodies incised with dragons and cobalt blue inscriptions at the shoulders. The presale estimate is $80,000-$200,000. With rounded shoulders tapering to the base, the exterior carved with a central register of flaming dragons in between classic scroll bands, flanked by applied fish handles on both sides, below galleried rim. The unglazed base with am embossed stamp of the studio mark: Boling.

Blue and white collectors will find Lot 168, a large Yuan Dynasty yuhuchunping featuring plantain leaves on the pear shaped body worth their bid at $50,000-$80,000.

Celadon takes center stage at Lot 159 with a Northern Song Dynasty baluster form yuhuchunping in tones of sea green. Molded with peonies and plantain leaves, the vase is $20,000-$30,000.

The baluster body is moulded with a wide band of peony scroll, above a band of upright plantain leaves, and below a downward band, rising to the flared mouth rim. The vase is covered overall with a light sea-green tone.

Finally a collection of Zisha porcelain teapots (Lots 256- 259) and a cricket jar (Lot 258) add to the interest of unusual Chinese ceramics.

Buddhist Art
Buddhist art rendered in silver, gilt bronze, polychrome porcelain, jade, stone, crystal and gouache carry values from $400 to $40,000. Lot 37, for instance, is a silver figure of a Shakyamuni Buddha seated in dhyanasana. Of the Ming Dynasty with the Zhengde six-character mark, the 12-inch statue weighs 5,300 grams (slightly more than 11 pounds) and is valued at $30,000-$50,000. Seated in dhyanasana with his hands in bhumisparsamudra, dressed in a loose layered robes with foliate scroll borders, the broad face centered by a raised urna and flanked by pendulous earlobes, the hair in tight curls over the ushnisha and topped with a knop, the base sealed.

Lot 207 is a rare, richly gilded bronze figure of Tara embellished with blue pigment at the head and polychrome at lips and eyes. This unusual statue will make $20,000-$40,000. 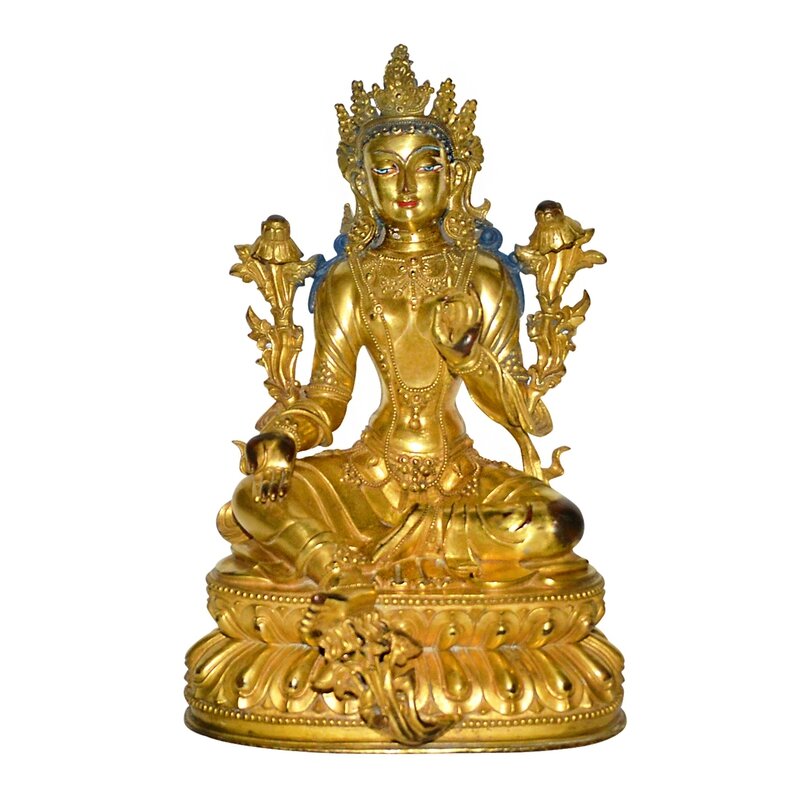 Richly gilt overall, seated in lalitasana with her pendant right foot resting on a lotus rising from the double-lotus base with beaded rims, her lower body clad in a closely fitting dhoti gathered at the ankles and secured with a belt at the waist, a shawl across her chest and shoulders, the hands forming varada and vitarkamudra, her face serene with polychrome accents to the face and a crown framing the forehead and secured by a band tied over blue painted hair drawn up into a knotted jatamakuta and topped by a cintamani jewel, with tresses falling to the bare shoulders and flanked by lotus blossoms on either side. The metal covered underside incised with a double varja. Standing on a double-lotus base with the hands holding varja, dressed in robe incised with dentilated pattern and adorned with gems, face with downcast expression surmounted with a tiara topped with a varja finial. The base sealed with a double varja.

Two Thangka wall murals, Lots 194 and 195, depict Goddess Sarawati with a stringed instrument and Ushnishavijaya holding all her instruments and framed by a flaming mandorla. Painted in gouache, the dynamic pieces will bring $3,000-$4,000. Fine Scroll Paintings
Fine art collectors who appreciate the company they keep need only view the thirteen Emperor seals, twenty-two collectors’ seals and colophon by Emperor Qianlong that adorn Lot 113, Traveling Troupe, a Northern Song Dynasty painting by Fan Kuan (950-1032). A masterpiece of tonality, the ink on paper captures the high rising river and plateaus of a mountain while a troupe of travelers in the foreground groom their water buffalo and attend to daily chores. The estimate on Lot 117, Traveling Troupe, is $15,000,000-$20,000,000. The strong collection of landscapes continues with Lot 113, Spring Outing by Tang Yin (1470-1523), and ink-on-paper portraying rockery in the foreground of a bridge with two-foot travelers, all set above a pavilion by the river’s edge filled with people. An inscription, signature, one artist seal and seven collectors’ seals support the $3,000,000-$4,000,000 estimate.

River’s End by Wang Shimin (1592-1680) a highly stylized undulating landscape depicting bridge over river and varieties of lichen, evergreens and blue leafed tees is dated 1668. It is signed by the artist and bears two artist seals, nine Emperors’ seals and three collectors’ seals. Bidding starts at $200,000.

Fast forwarding to mid-century, Lot 100, Spring Trees by Wu Guanzhong (1919-2010) makes a strong abstract statement with a ground of colorful ink splashed overlaid with bold black strokes. Signed, with one artist seal, it is set to go off at $40,000-$60,000. The attributes of scholars are poignantly portrayed in Lot 126, Luohans Crossing by Zhang Daqian (1899-1983), that shows a wizened old man supported by attendant crossing water will fetch $50,000-$80,000. Study Group, 1951, also by Zhang Daqian, captures two men pouring over a book. It is inscribed and signed with three artist seals bringing the auction to $40,000-$50,000. Both pair nicely with Lot 30, a golden shoushan stone boulder carving of nine Luohans moving between heaven and earth. It is $2,000-$4,000. 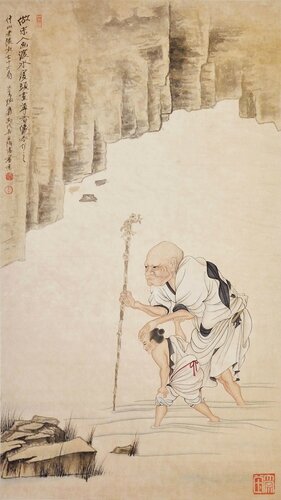 Exquisitely carved with flaming dragon above and rockwork below, depicting nine luohans moving between Heaven and Earth. With wood stand. Height: 5½ in ( 14 cm)

Seals and Smalls
Always popular with collectors are shoushan and jade seals. The auction puts a fine collection up front. The most sought after will be Lot 32, an olive green jade dragon seal of the Ming Dynasty. Surmounted on a rectangular base is a highly detailed, very scaly, recumbent dragon. The base has a six character intaglio: Zhengtong Huangdi Zhibao (Treasure of the Zhengtong Emperor.) The five pound seal is valued at $30,000-$50,000.

Rounding out the sale is a collection of the mythological creatures that populate Chinese mythology. Lot 173 a rare pair of rock crystal bixie from the Song Dynasty, predating the prevalence of Ming and Qing Dynasty crystal carvings, reflects the importance of the stone, known as “essence of water.” This crouching pair is very detailed and expected to find a buyer at $28,000-$40,000. Other bixie in the sale are represented in yellow jade (Lot 174), shoushan stone (Lot 12) and carved bamboo root (Lot 137).

For details on carved jade decorative items and the fine collection of zitan and burl wood collectibles, please visitwww.gianguanauctions.com