Giuseppe Penone Shows His "Leaves of Stone" at Gagosian

Giuseppe Penone Shows His "Leaves of Stone" at Gagosian A tree trunk of marble, of calcium, encloses, in our thought, the carbon, the plant, and the plant the camouflage of the color of the bronze, and the color of the bronze, the green of the foliage and the trees, the flowing of the material, of water, of rivers in which there courses the subterranean life of the world, of the veins whose flow is enclosed in our body as in the marble cave of the mountains. —Giuseppe Penone

In an oeuvre spanning more than forty years, Penone has explored the subtle levels of interplay between man, nature, and art. His work represents a poetic expansion of Arte Povera's radical break with conventional media, emphasizing the involuntary processes of respiration, growth, and aging that are common to both human being and tree. In December 1968 Penone performed a series of formative acts, literally described, in a forest near his home in Garessio, Italy. In one, he interlaced the stems of three saplings in Ho intrecciato tre alberi/I have interwoven three trees; in another, Albero/filo di zinco/rame/Tree/wire of zinc/copper, he made the imprint of his hand in nails on the trunk of a tree and then affixed twenty-two pieces of lead (his age at the time), joined up with zinc and copper wire. In Crescendo innalzerà la rete/Growing it will raise the net he enclosed the top of a tree in a net weighed down with plants; while inL'albero ricorderà il contatto/The tree will remember the contact, he pressed his body to a tree, marking the points of contact with the trunk in barbed wire. In Continuerà a crescere tranne che in quel punto/It will continue to grow except at that point he intervened in the growth processes of a tree by inserting a steel cast of his own hand; over time the tree retained the memory of his gesture. In a stream he immersed a slab of cement of the dimensions of his body with the imprints of his hands, feet and face (La mia altezza, la lunghezza delle mie braccia, il mio spessore in un ruscello/My height, the length of my arms, my girth in a stream). In the early 1970s, Penone continued to work with his own body by transcribing the textures of his skin and casting his face in plaster. For Turning One's Eyes Inside Out (1970), he was photographed wearing mirrored contact lenses, positing vision as the precise point of separation between self and environment. "The work of the poet," he wrote, "is to reflect like a mirror the visions that his sensibility has given him, to produce the sights, the images necessary to collective imaginings." 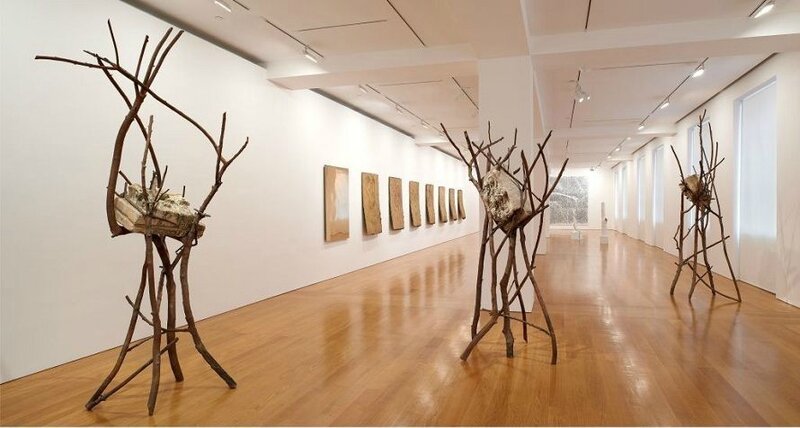 Engaging with, and subtly intervening in nature so as to reimagine it in artificial terms, Penone finds ever new ways to mark the persistence of biological life, harmonizing elemental occurrences in terms of his own artistic drive. In each work, he reveals the innate sculptural qualities of natural materials, chiseling marble and casting from nature to expose the deep patterns of growth and time. In the current exhibition, Riflesso del bronzo/Reflection of bronze (2004) is a wall-mounted work in eight parts, where each dimly reflective, excoriated bronze plaque, successively cast from its immediate predecessor, is, literally, a mirror to time and process. The connection between act and contact, trace and imprint is further explored in Spine d'acacia—Contatto, aprile 2006/Acacia thorns—Contact, April 2006, where Penone painstakingly attached thousands of sharp thorns onto paneled canvas in sweeping whorls. At the center of the composition emerges the impression of a huge pair of lips, as if pressed directly on the canvas in visceral relation with nature. The tree and its relationship to man is among Penone's most enduring subjects and a seemingly inexhaustible source of inspiration. A series of works Indistinti confini/Indistinct boundaries (2012), with their individual subtitles citing ancient Italian rivers, are bare tree trunks on pedestals, carved with astonishing veracity in ghostly white marble, into which Penone has embedded rusting iron nails and bronze knots. These metal elements eventually leach into and stain the marble, so the work appears to be, in a sense, "alive." Foglie di pietra/Leaves of stone (2013), from which the exhibition takes its title, is a series of sculptures in which tall splints of delicate cast bronze tree branches cradle found fragments of eighteenth-century ornamental stonework inspired by vegetal forms, a meditation on the endurance of nature beyond the passage of manmade culture and history. 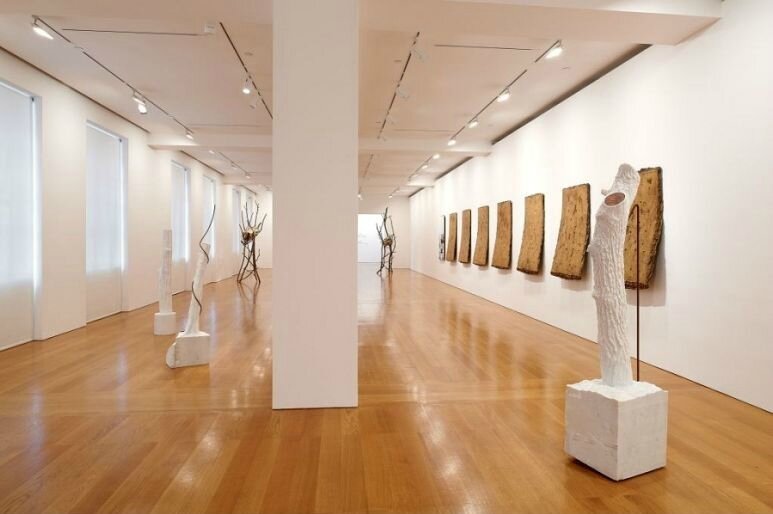 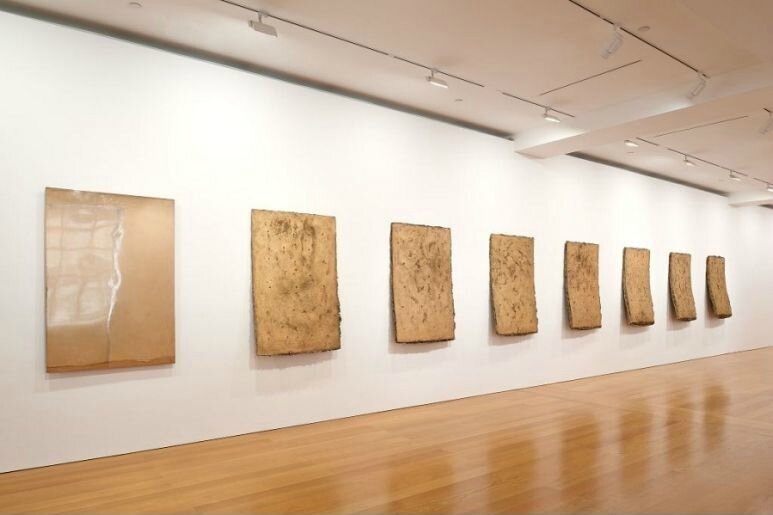