Skinner to offer Asian works of art at auction in Boston

Skinner to offer Asian works of art at auction in Boston BOSTON, MASS.- Skinner, Inc. announces its first Asian Works of Art auction of 2016, to be held in Boston Saturday, March 19 at 11AM. Encompassing more than 500 lots and featuring Chinese and Persian ceramics, jades, textiles, cloisonné and an important Coromandel screen, the sale will coincide with the annual Spring Asia Week celebration of Asian art in New York. compressed globular body with an elongated flared neck resting on a flared foot with unglazed brown-dressed rim, six-character Qianlong mark in underglaze blue on base, ht. 15 in. 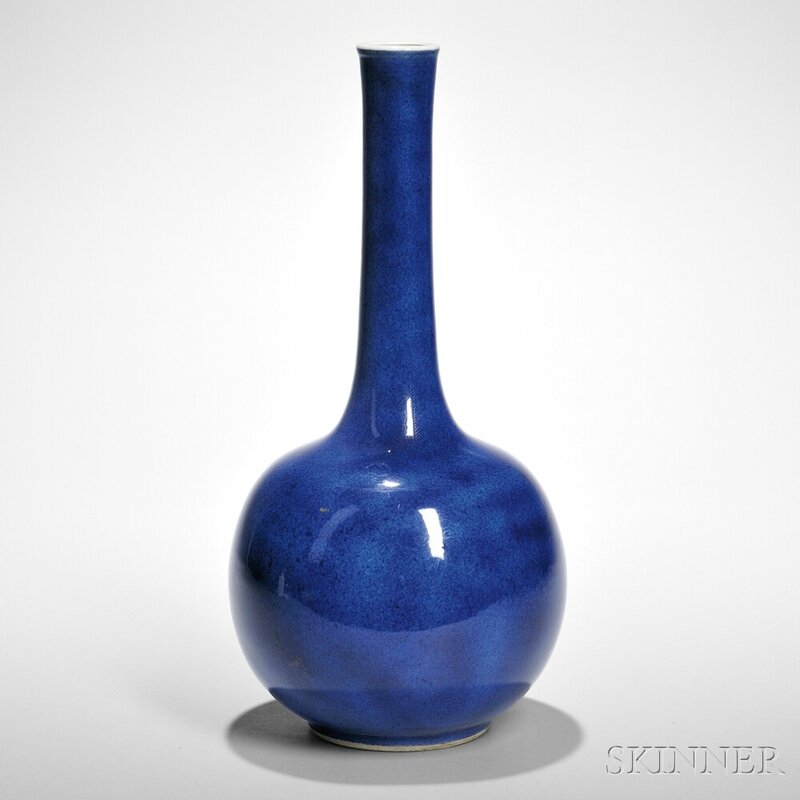 globular body with tall slender neck, white-glazed mouth rim and base, decorated in gilt with phoenix-and-cloud design below bands of floral design around shoulder, a banana leaf band to neck, and a floral band around rim, Morgan Collection sticker to base, with a carved wood stand, ht. 16 1/4 in. loss of almost all gilt details, minor surface scratches. 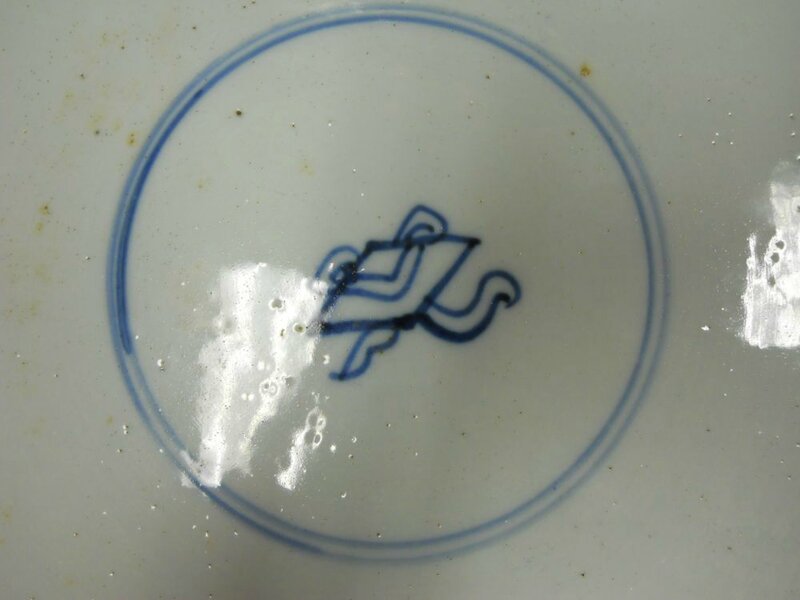 with rounded sides and slightly slanted rim, resting on a raised foot, the well decorated with a garden scene with three figures, mostly in blue and green enamels in a barbed roundel, the cavetto of underglazed powder-blue decorated with gilt floral designs, the powder-blue rim with flower-and-bee designs in polychrome enamel alternating with ones in gold, all painted in sixteen lobed lozenge-shape cartouches, the exterior with three floral sprays in enamels, the painting symbol of the "Eight Treasures" in a double ring in underglaze blue on base, ht. 2 1/2, dia. 16 in.  minor loss of gilt and enamel, surface scratches, stains particularly to underside. 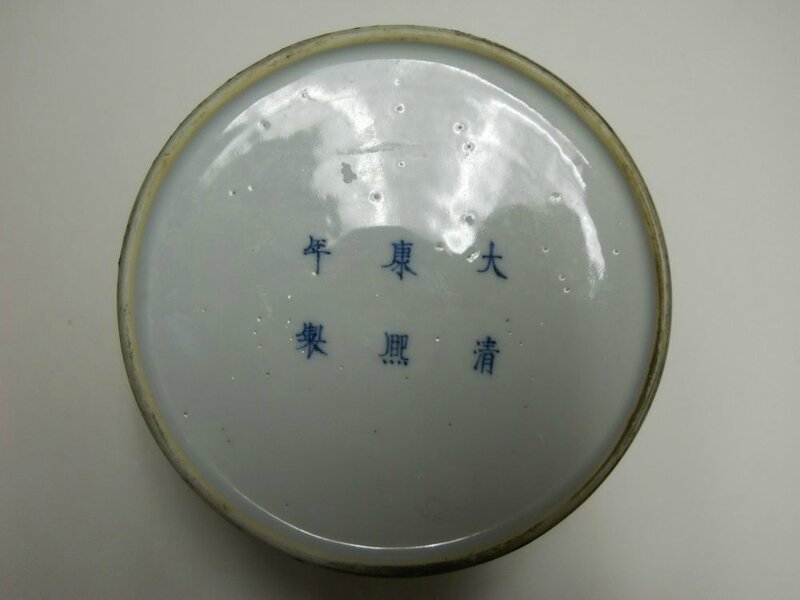 beehive form, decorated with three archaic stylized dragon roundels in underglaze, overall reddish gray glaze thinning at the neck and pooling at the base rim, white-glazed interior and base, six-character Kangxi mark on base, ht. 3 1/2 in. small round kintsugi repair to the body.

Persian Ceramics
Also on offer are Persian ceramics from the collection of Marion E. James (1918-2015), professor emerita of the University of New Hampshire, who traveled extensively in the Middle East in the mid-20th century. The majority of the ceramics date from the 10th to the 14th century; of particular note are Lot 9b, a 12th/13th century Polychrome Pottery Garrus Bowl with Figural Decorations ($3,000-$5,000) and a Turquoise and Black Kashan Plate dating from the 13th/14th century (Lot 9d, $2,000-$2,500). conical with a slightly flared short foot, the interior decorated with a princely figure seated with his heels together, with his hands reaching out to a simurgh on one side and an attendant on the other, the red earthenware decorated with brown, light brown and green glazes, ht. 2 5/8, dia. 6 1/2 in.; one side of bowl filled in and restored. 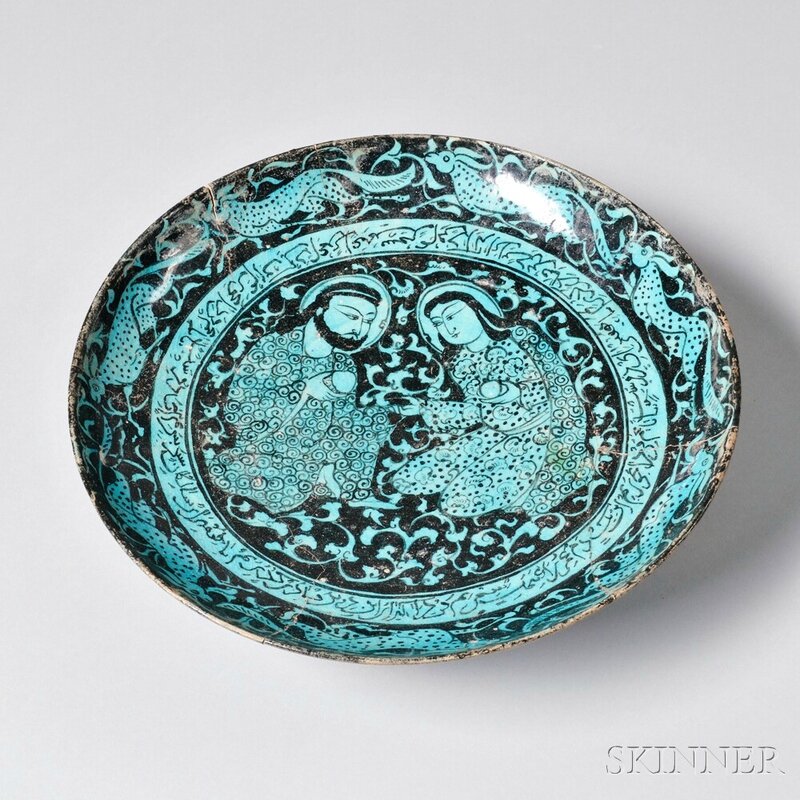 shallow rounded dish on a straight tall foot, the interior decorated with a pair of lovers holding apples, all surrounded by scrolling florals and a border of Nastaliq calligraphy, with a border of onagers, dia. 10 3/4 in.; one area at rim cracked and repaired, four other cracks extending from rim, small area of residue/discoloration.

Other Collections and Highlights
Other important ceramics include Lot 313 ($8,000-$10,000), a Pair of Blue and Green Covered Dragon Jars, possibly Daoguang period; this lot and several others in the sale descended through the family of Ames Nowell of Massachusetts. Among lots from the collection of André Carlhian (1883-1968), and descended in his family, are an important Ming dynasty (1368-1644) Polychrome and Gilt Stucco Head of Guanyin (Lot 428, $10,000-$12,000), and a Double-sided Twelve-panel Coromandel Screen dating to the Kang'xi period (1662-1722) and depicting the tale of the Peach festival (Lot 523, $20,000-$30,000); this exceptional screen was purchased by Mr. Carlhian from C. T. Loo on the opening day of a 1931 New York City exhibition in which it was included. 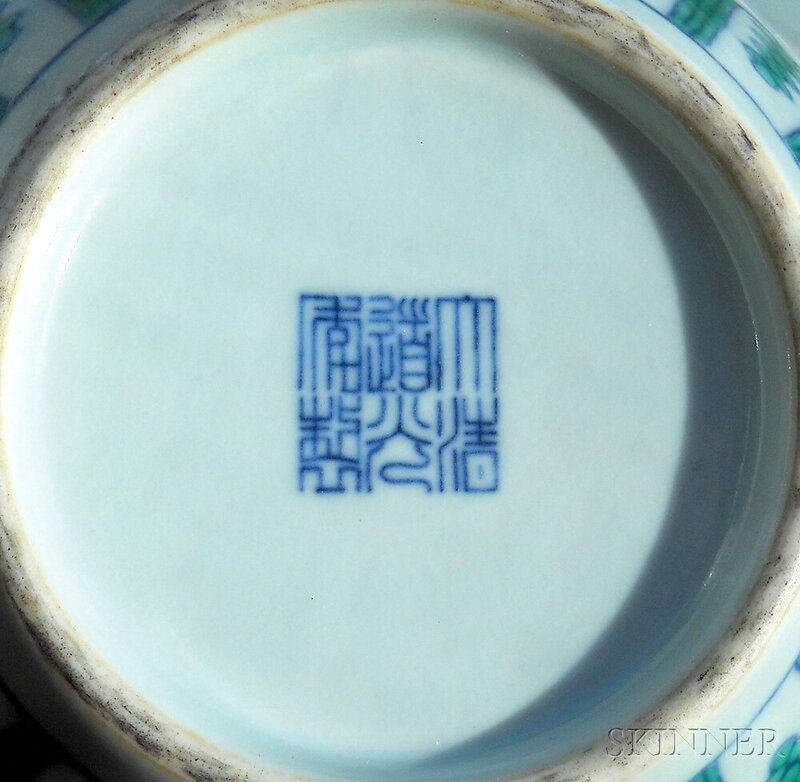 ovoid, the sides decorated with two dragons and pearls amidst clouds, a band of the "Eight Buddhist Emblems" at the shoulders and a lappet border at the foot rim, six-character Daoguang mark on base, with carved openwork wood stands, ht. 7 3/4 in.

Provenance: Descended through the family of Ames Nowell of Massachusetts. 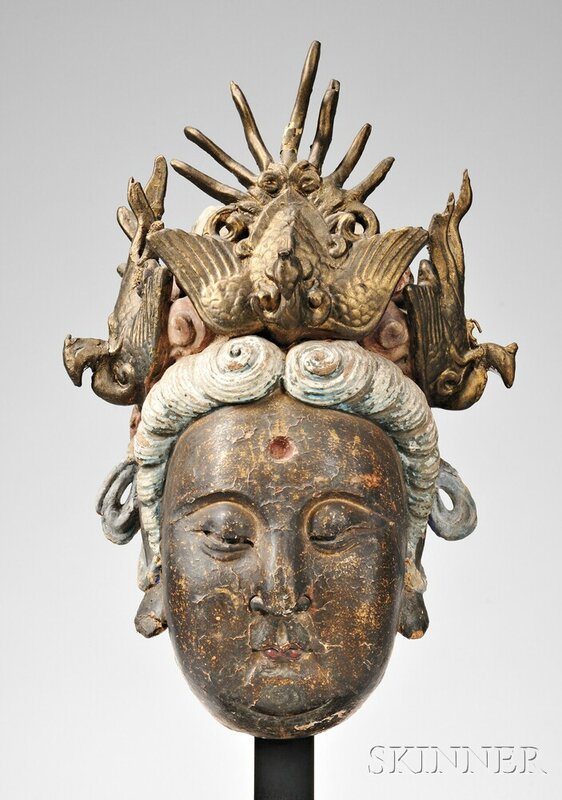 both sides carved, colored, and lacquered in kuancaitechnique, one side illustrating the Peach Festival, a legendary banquet with Xi Wangmu in the upper center, the Jade Emperor in the upper right, along with various legendary figures and immortals including Shoulao sitting in the center, the other side depicting a myriad of birds and flowers in a continuous scene, both scenes surrounded with a broad band of the "Hundred Antiques," floral sprays and arrangements, and mythical animals, a C.T. Loo sticker on the leftmost panel of the bird-and-flower side, each panel ht. 101 1/2, wd. 21 1/4 in.; numerous cracks, detached details, breakages to lacquered layers, some panels detached from the others.

Another exceptional highlight from the sale is a rare and excellent example of a Qianlong period Cloisonné Ice Chest (Lot 69, $40,000-$60,000) whose polychrome decoration of fruits, insects and flowers is a feast for the eyes. square with tapering sides, decorated all over with a variety of auspicious flora and fauna against a sky blue ground in three sections divided by two metal bands of engraved lotus scrolls, the banded metal rims of both cover and chest decorated with trellis designs, a pair of upturned ruyi-head handles on each of the midsections of two sides, the two-part hinged cover with two openwork coin designs to one side designed to release cool air, the pewter-lined interior with a two-part hinged cover and a wooden insert on the bottom, ht. 19 3/4, wd. and dp. 28 1/2 in.; the cover distorted in overall shape (not completely closing the chest), multiple dents, cracked enamels, and holes, the chest with two slashing breakages to two sides, traces of repairs along the broken lines, normal wear and tear with surface scratches, rusting, and surface dirt, loss of enameled details to some area. rectangular with slanted sides, resting on four bracket feet, probably modeled after a bronze prototype, plain body, each of the two narrower sides with a shelf-like flange with a qilin seated on top and a loose ring below, the angular cover decorated with openwork floral scrolls on four sides and a qilin seated on the flat top, a mark reading "Yugong" on base, pale translucent green stone with russet and apple green streaks, with an openwork wood stand, ht. 4 3/4, wd. 4 7/8 in.; in excellent condition seated on her hind legs with her right arm raised as if scratching her ears, the mouth slightly open showing her teeth, incised archaic scrolls as her hair, the stone of olive green with russet and darker green matrix, highly polished, with a lockable wood case with glass top, ht. 3 in.; in excellent condition

Representative of several early dragon robes and other fine textiles in the sale is Lot 407, a Blue Silk Formal Embroidered Dragon Robe purchased in China in the early 1900's ($3,000-$5,000). embroidered with nine dragons chasing flaming pearls on the front and back, sleeves and on the underflap, all amidst stylized clouds interspersed with shou symbols and the "Eight Buddhist Treasures", above cresting waves, clouds and a lishui border, trimmed with smaller dragons chasing pearls at the neck and sides, all couched in gold, silver, and copper thread, the straight sleeves with dragons, phoenixes, and shou characters, lg. 44 1/2 in.; Very minor loose threads, wear to attachments.

Provenance: Purchased in China in the 1910s.