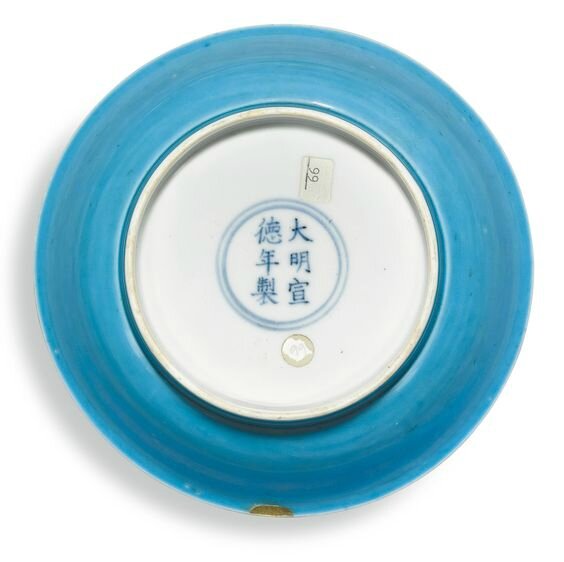 delicately potted with a short tapering foot rising to rounded sides and a gently flaring rim, the interior decorated in anhua (‘hidden decoration’) technique with two dragons in pursuit of flaming pearls, the centre faintly engraved with a cluster of three lingzhi-shaped cloud scrolls, all further dressed in an unctuous white glaze, the exterior covered with a brilliant turquoise glaze applied to the biscuit, the footrim burnt yellow around the unglazed edge, the white-glazed base inscribed in underglaze blue with a six-character reign mark within a double circle - 14.9 cm, 5 7/8  in.

Note: Porcelains with bright monochrome glazes are among the rarest products of the imperial kilns, not only of the Xuande reign (1426-35), but throughout the Ming (1368-1644) and Qing (1644-1911) dynasties. A turquoise glaze had in China already been used in the Yuan dynasty (1279-1368), but only on fairly coarse ‘Cizhou’ stonewares. It represented a complete new-orientation for the potters in the early Ming period, as it had to be applied on the biscuit and fired on in a second, lower-temperature firing. White porcelain dishes of this type, with anhua dragon designs on the inside, are also known with copper-red and cobalt-blue glazes on the outside, glazes that could be applied at the same time as the transparent glaze, as they matured at similar high temperatures as the porcelain itself. For the present dish, however, only the inside and base were applied with a translucent glaze before the piece was fired, the outside specially left free to remain in the biscuit which was then covered with a turquoise glaze and the dish re-fired. Great care had to be taken that the biscuit did not discolour in the firing, but remained pure white.

Although many experiments with lower-firing glazes applied on the biscuit had already been made at the imperial kilns in the Yongle period (1403-24), turquoise seems to have been introduced only in the Xuande reign. Only seven turquoise-glazed porcelains of Xuande mark and period appear to be recorded, apart from fragmentary examples excavated from the Xuande stratum of the Ming imperial kiln site in Jingdezhen, Jiangxi province. Only one unmarked turquoise piece appears to be preserved of the early Ming period, an incense burner also attributed to the Xuande reign, in the National Palace Museum, Taiwan, included in the Museum’s Special Exhibition of Selected Hsüan-te Imperial Porcelains of the Ming Dynasty, Taipei, 1998, cat. no. 25.

The seven Xuande-marked turquoise porcelains are all dishes, of several different sizes and with different reign marks, illustrating that these turquoise-glazed pieces never entered the standard production at the imperial kilns, but were individually conceived: three turquoise-glazed dishes are in the National Palace Museum, Taiwan, two in the British Museum, London, and only two others have ever appeared at auction.

A slightly larger dish of this form, glaze colour, design and reign mark in the National Palace Museum, Taiwan, was included in the Museum’s Special Exhibition of Selected Hsüan-te Imperial Porcelains of the Ming Dynasty, Taipei, 1998, cat. no. 163; and again in the exhibition Ming Xuande ciqi tezhan, Taipei, 1980, cat. no. 103, together with another with incised Xuande mark, cat. no. 102. The third turquoise-glazed Xuande dish in Taipei, with anhua floral design instead of dragons on the inside, is listed in the inventory of the porcelain collection in the National Palace Museum, Gugong ciqi lu [Record of porcelains from the Old Palace], Taichung, 1961-6, vol. 2, part 1, p. 83.

Two other slightly larger dishes of this type are in the British Museum, one, bequeathed by Harry Oppenheim, is illustrated in Jessica Harrison-Hall, Ming Ceramics, London, 2001, p. 142, pl. 4:45, the other from the collection of Sir Percival David is illustrated in Regina Krahl and Jessica Harrison-Hall, Chinese Ceramics. Highlights from the Sir Percival David Collection, London, 2009, pl. 33.

Although so few turquoise-glazed imperial porcelains are preserved from the Xuande period, the excavation of the waste heaps of the Ming imperial kiln site has yielded many failed and deliberately destroyed and buried vessels glazed in turquoise, including two dishes, a flared bowl, flared cup, a bell-shaped bowl and a stem bowl, as well as pieces with a turquoise glaze covering a cobalt-blue design, see Jingdezhen chutu Mingdai yuyao ciqi [Porcelains from the Ming imperial kilns excavated at Jingdezhen], Beijing, 2009, pls. 069 – 074, and the exhibition catalogue Jingdezhen chutu Yuan Ming guanyao ciqi/Yuan’s and Ming’s Imperial Porcelain Unearthed from Jingdezhen, Yan-Huang Art Museum, Beijing, 1999, cat. nos. 268-73, with a dish similar to the present piece in shape and size, but apparently without anhua, illustrated as pl. 073 in the former publication.

Turquoise-glazed imperial porcelains remained rare throughout the Ming and Qing periods. In the Chenghua reign (1465-87), a turquoise glaze appears to have been used only in combination with cobalt blue, as on a box and cover in the British Museum, illustrated in Jessica Harrison-Hall, Ming Ceramics, London, 2001, pl. 6: 17; a rare monochrome turquoise-glazed bowl of Zhengde mark and period (1506-21) in the Palace Museum, Beijing, from the Qing court collection is published in The Complete Collection of Treasures of the Palace Museum. Monochrome Porcelain, Hong Kong, 1999, pl. 144; an equally rare bowl of Jiajing mark and period (1522-66) with incised phoenix under the turquoise glaze, now at Ascott House, Buckinghamshire, England, is illustrated in Regina Krahl, The Anthony de Rothschild Collection of Chinese Ceramics, n.p., 1996, vol. 1, pl. 66.

The present dish comes from two famous collections, that of F. Howard Paget (1886-1945), who also owned the Chenghua ‘Palace Bowl’, and of H.R.N. Norton (d. 1961/2), who owned several pieces in the Pilkington collection, including the Yongle ‘Holy Water’ vessel. For biographical notes on the two collectors see lots 25 and 15, respectively.