Provenance: Mrs. Bredin, Bath, Somerset, England, until 1969.
Acquired from the above by the present owner.

Note: This magnificent miniature altarpiece is one of the finest and most important Trecento pictures to come to auction in the last decade. The central panel, framed along its upper edge with an ogival molding, features all the ravishing colors, painstaking attention to pattern and detail, and tender intimacy which characterize the highest achievements in Bernardo Daddi’s oeuvre. Described by Richard Offner as ‘certainly the greatest master in the Florence of his day’, Daddi worked both on a monumental, Giottesque scale – possibly even collaborating with Giotto on the decorations of the great Franciscan church of Santa Croce in Florence – and in a smaller format, producing private devotional pictures of great delicacy. These paintings, of which the present work is an exceptionally refined example, led Offner to describe Daddi as the epitome of what he termed the Florentine “miniaturist tendency”, a sophisticated style of painting which would become popular, in no small part due to Daddi’s enormous success, in the 14th century.

The Enthroned Madonna surrounded by saints and angels at the center of this complex, probably originally conceived as the center of a triptych, reveals Daddi at his most lyrical and enchanting. The exquisitely modeled robes range from luxurious blues to cool, sage greens, to bright vermilion and deep rose, and are characterized by a consciously exaggerated, lyrical use of line. The background gilding is equally sumptuous, adorned with elegant punched decorations as well as sophisticated hand-tooled designs, and the mordant gilding which embellishes the figures’ robes is applied with similar meticulousness.

The richly embroidered cloth of honor behind the Virgin, which features a pattern common to Persian textiles that had become popular models in Trecento Florentine workshops, is carefully described to indicate its three-dimensionality: the sides are painted in a slightly darker shade to show their recession into space and shadow, and the cloth appears to fall with real weight, gathering in a swollen bunch at the seat of the throne and flowing naturalistically over its edge. The throne itself, meanwhile, is a tour-de-force of painted architecture, featuring a proliferation of fictive moldings and porphyry inlay. Its real, spatial presence is painstakingly delineated, from the carved arms and arches to the twisting florets surmounting the marble structure, and is underscored by the angels at left and right, who delicately grasp its vertical elements. Because he has placed this remarkable structure slightly off-center, Daddi has been careful to reveal a little more of the punched border at upper left than at upper right – most evident in two lone punches between the upper florets of the top of the throne at left. The insistent three-dimensionality of the scene proves that Daddi, even on such an intimate scale, never abandons the solidity of form and monumental figural presence pioneered by Giotto a generation earlier.

The Enthroned Madonna is datable to the mid- to late 1330s, and is comparable to several other mature devotional works by Daddi, including the portable tabernacles in the Courtauld Institute of Art, London and the Minneapolis Museum of Arts. Some thirty years later – after Daddi’s death – the Enthroned Madonna was given a new frame, including the lateral pinnacles, double predella, and striking scene showing The Apparition of God the Father at upper center that adorn it today. The figural components of these additions have been convincingly attributed by Laurence B. Kanter and Sonia Chiodo to the Master of the Misericordia, an artist named in 1958 by Richard Offner after the impressive altarpiece now in the Accademia at Florence.

The Misericordia Master was one of the most effective and productive artists in Florence from the mid-14th century until about 1385/1390. Like Daddi, this accomplished painter worked on both a monumental and “miniaturist” scale; in this case, he has adopted the latter mode, working to emulate Daddi as closely as possible and even replicating the freehand incisions in the haloes from the central panel. The remarkable scene in the upper register shows two pairs of angels looking up towards the blinding luminosity of God the Father, a divine apparition from which they are forced to shield their eyes with their hands or dark lenses. This relatively rare motif was certainly inspired by the work of the great Giotto di Bondone, the father of Florentine painting, who produced a similar scene for the pinnacle of his monumental Baroncelli altarpiece (Fig. 1). This altarpiece, most of which is still in situ at Santa Croce, was of central inspiration to the development of Florentine painting in the second quarter of the 14th century, as the present work attests. 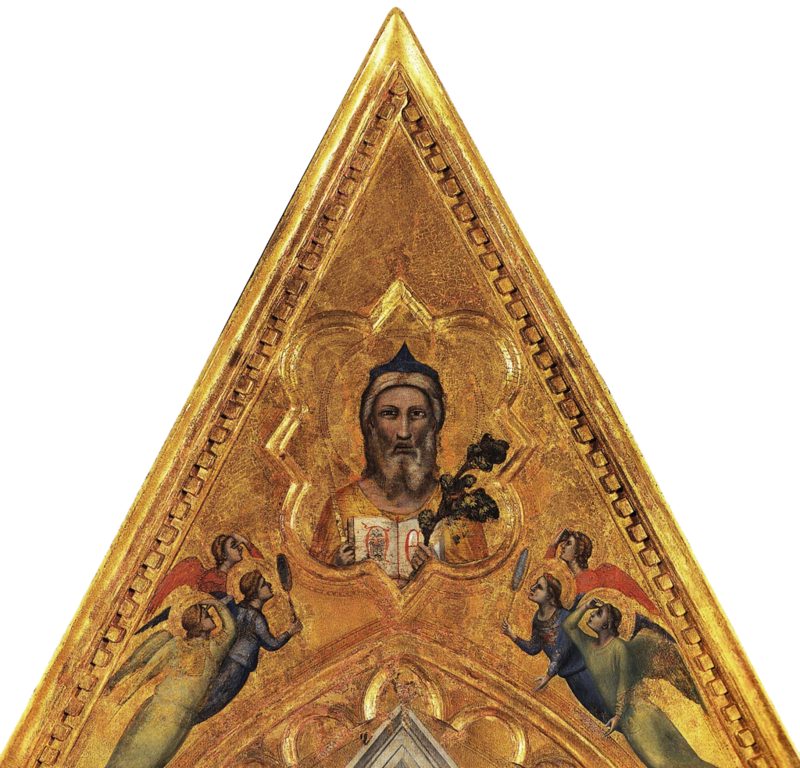 Although Sonia Chodio (loc. cit.) had, on the basis of photographs only, argued that the framing elements described above might have been added as late as the 19th century, Laurence B. Kanter has, on the basis of firsthand inspection, demonstrated conclusively that the gesso application – and indeed the entire construction of this miniature maestà – dates to the 14th century (verbal communication, October 2015). This is perhaps most evident in the upper register, where the gold leaf is entirely original, as in much of the rest of the complex. This upper section is comprised both of gilding applied by Daddi (to the pinnacle above the ogival arch of his central panel, still visible in raking light underneath the figure of God the Father) and gilding applied by the Misericordia Master (to the remainder of the scene), which displays a different pattern of craquelure, proving that the old and new panels were joined before the Misericordia Master began painting. One theory, which remains hypothetical, is that Daddi’s panel was reformatted in the late 1360s to serve as a standalone altarpiece, perhaps for some small personal or guildhall chapel, and that the key to this secondary commission may be in the as-yet-unidentified coats-of-arms on the predella at left and right.