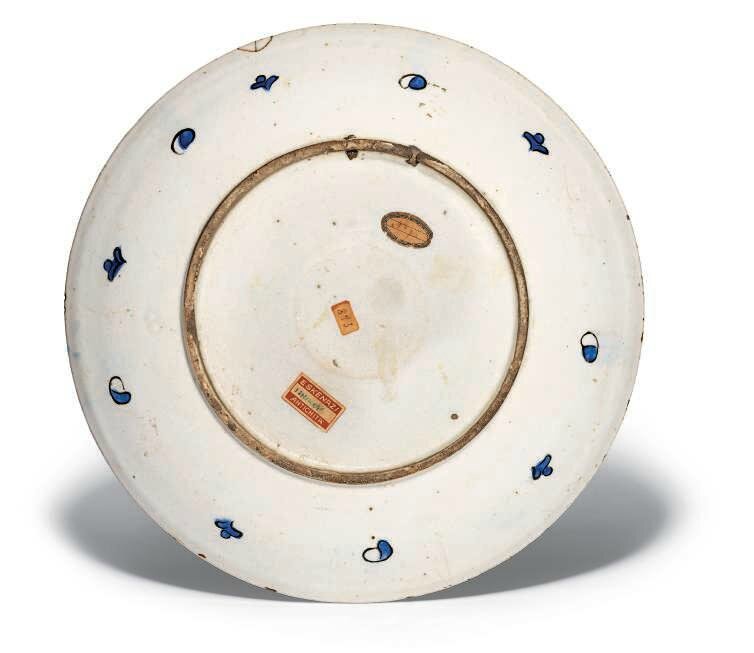 With gently curving sides and no rim, the white interior painted in cobalt-blue, turquoise, bole-red, green and black with an energetically drawn turbaned rider contemplating a fast flowing stream filled with green fish amidst fanciful flowers and birds, the thin border with white clouds reserved against blue, the exterior with alternating blue motifs, rim chips, the largest with fired replacement and small hairline crack, foot drilled in two places, old owner's stickers to base, excellent condition and glaze surface; 11¾in. (30cm.) diam.

Note: Iznik vessels of the 16th century depicting the human figure are very rare indeed. Only one other dish, in a private collection and formerly in the J. Acheroff Collection, can clearly be dated to the 16th century. It uses as its main design two human figures (Arthur Lane, Later Islamic Pottery, London, 1957, pl.43A, dated "about 1560-80"). Nurhan Atasoy and Julian Raby date it later, to 1590-1600, but still within the 16th century (Nurhan Atasoy and Julian Raby,Iznik, the Pottery of Ottoman Turkey, London, 1989, pl.609).

Unlike the static nature of the Acheroff dish, the artist who painted the present example fills it with a vitality which is very unusual in the attempt to convey movement. The head of the horse is very fluently drawn, and the bird hovering over the horse's head is masterly. There is no apparent iconographic source for the design; it comes straight from the imagination.

One small clue which links this dish with two other Iznik vessels which are themselves most unusual is the irregular blue line at the bottom of the dish. The pattern of this line is very close to that on two very similar dishes, each of which depicts a bird in the centre of scrolling panels outlined by similar lines. The bird in the centre is again very fluently drawn, but a quick inspection again shows a complete lack of any attempt to recreate normal proportions. One of these dishes is in the inili Kösk, Istanbul (Atasoy and Raby, op.cit, pl.761); the other, whose present location is unknown, is known from a drawing in the acquisition records of General Pitt-Rivers, formerly at the Pitt-Rivers Museum, Farnham, having been purchased at Philipps on 12 June 1883.