Each of slender form, the trumpet-shaped neck is finely cast with four blades of cicada type above a narrow band of four angular snakes with hooked tails. The center section is decorated with two taotie masks divided and separated by narrow flanges, the flared foot with a narrow band of birds above two larger taotie masks, each cast inside the foot with the same inscription. The bronze has a mottled grey and milky green patina and areas of green malachite encrustation. 11 in. (28 cm.) high, wood stands.

Provenance: Property of a French private collection, acquired prior to 1984, and thence by descent.

Notes: The graph on the interior of both foot shows a human figure in profile, with prominent foot and hand reaching towards an implement, possibly a baton. The figure in profile may represent fu (father), and the implement he reaches for may identify his family name.

These pairs of finely cast gu are associated with the angular and precise style from the latter part of Anyang period, which all exhibit the same distinctive structure and the same decorative sequence of motifs.

A bronze gu with very similar cast decoration, but incorporating inverted taotie masks set within the blades on the neck, are illustrated by R.W. Bagley in Shang Ritual Bronzes in the Arthur M. Sackler Collections, The Arthur M. Sackler Foundation, 1987, pp. 255, nos. 38. Compare to another similar pair of bronze gu from the Arthur M Sackler Collections, sold at Christie's New York, 14 September 2009, lot 5. 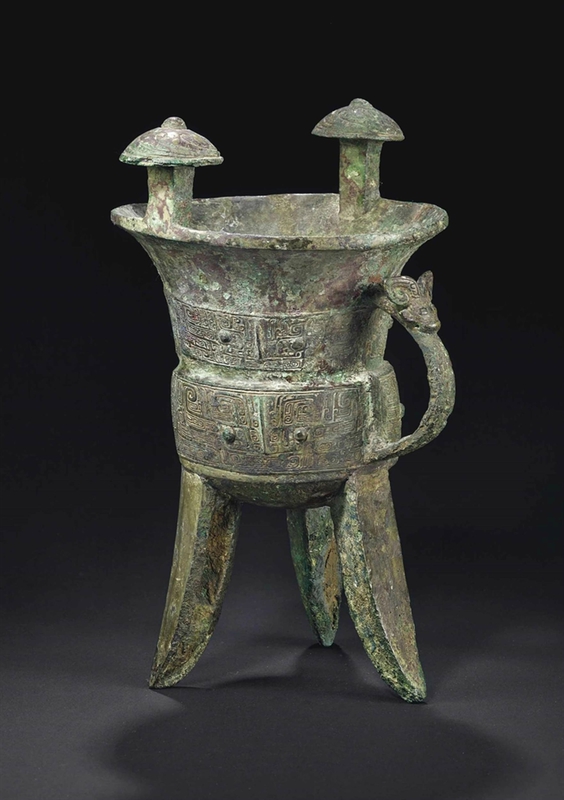 Raised on three blade-form supports, the body is cast with two bands of taotie masks, each composed of three masks positioned between the supports and with rounded eyes and slender dividing flange, with a simple strap handle surmounted by a mythical animal's head and a pair of rectangular posts with large conical caps cast with comma motifs; restorations. 12 ¾ in. (32.5 cm.) high

Provenance: Property of a French private collection, acquired prior to 1989, and thence by descent.

Notes: A jia of larger size (45 cm. high) with similar decoration dated to the 13th-12th century BC is illustrated by R.W. Bagley, Shang Ritual Bronzes in the Arthur M. Sackler Collections, Washington, DC and Cambridge, Massachusetts, 1987, pp. 164-5, no. 7. Both side are cast in high relief with a taotie mask, and the hollow, tapering shank opens into the base of the bell. 6 ¼ in. (16 cm.) high, wood stand

Provenance: Acquired prior to 1984, and thence by descent.
Property of a French Private collection

Notes: The musical instrument nao first appeared in China in the late Shang period and continued to be made into the early Zhou dynasty. They were made in sets of five or three, and were probably held upright in stands so that they could be struck from the exterior. Most of them have been excavated in the south of Henan, south of Shandong and Shaanxi provinces. A set of five was found in Fu Hao's tomb in Anyang, and is illustrated in Yinxu Fu Hao mu, Beijing, 1980, pl. LXII (1). A comparable example was sold in Christie's New York, 20-21 March 2014, lot 2010. Raised on a flared pedestal foot, the globular body is surmounted by a pair of C-scroll handles issuing from a bovine mask and terminating in a hooked pendent tab. The neck is cast in low relief with a band of taotie masks separated by a mythical animal's head, and a similar band is repeated on the doomed cover and the foot. The interior of the vessel and the cover are cast with a three-character archaic inscription reading: zuo zun yi (‘made this precious vessel'), and the base is incised with archaic patterns; small restoration.
7 7/8 in. (20 cm.) high, wood stand

Provenance: Property of a French private collection, acquired prior to 1989, and thence by descent.

Notes: A gui with similar decoration on the shoulder and foot, is illustrated in Catalogue to the Special Exhibition of Grain Vessels of the Shang and Chou Dynasties, National Palace Museum, Taipei, 1985, pp. 254-255, pl. 42. Also compare to a very similar bronze gui and cover, dated early Western Zhou dynasty, sold in Christie's New York, 22-23 March 2012, lot 1520. Both pear-shaped vases are flat-cast with bands of scroll-filled, triangular pattern set within narrow scroll borders which are repeated on the neck. At the base there is a band of upright triangular blades filled with scrolls. There is a pair of mask handles suspending loose rings on the shoulders. 11 ¾ in. (30 cm.) high 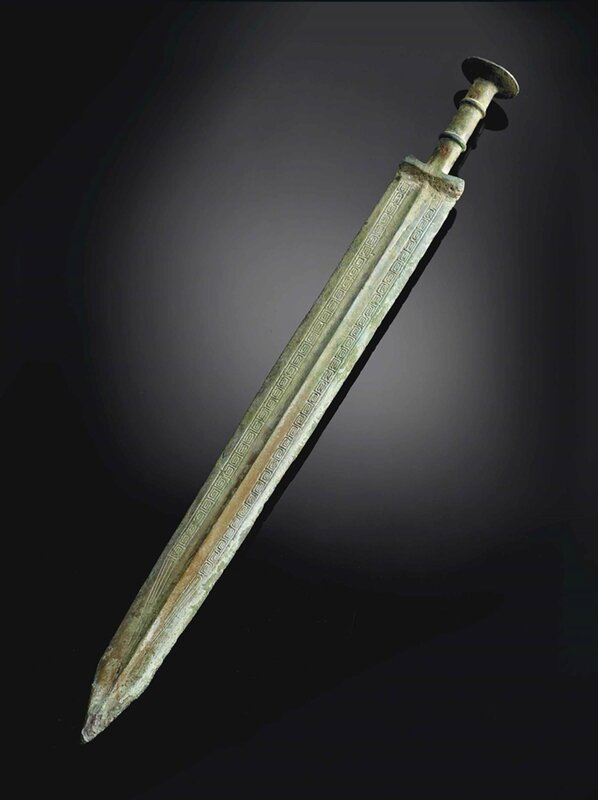 The elongated blade has bevelled edges and a distinct median ridge, and both sides are incised with two bands ofleiwen motifs. The hilt has two circular flanges and a circular dished pommel. 23 in. (58.5 cm.) long Raised on a pedestal foot, the pear-shaped body is encircled by three slightly concave bands and with a pair of masks suspending loose rings on the shoulder. 18 1/8 in. (46 cm.) high

Property of a French Private Collection.