LONDON - A fine and rare Iznik pottery tile is one of the highlights of Bonhams Islamic and Indian sale in London on 18 October. Estimated at £25,000-35,000 it is part of an impressive selection of antique tiles from Iznik, Kashan and other major pottery centres in the Islamic World.

The tile is of rectangular form, decorated in raised red, cobalt-blue and green on a white ground with black outline with a panel containing two bands of alternating sazleaves and lotuses, the interstices with flowerheads and leafy tendrils, three edges with border containing a band of radiating palmettes.

It comes from a Private collection, Netherlands, then Christie's, Islamic art and Manuscripts, 29 April 2003, lot 169.

An interesting and unusual feature of this tile is the method by which some areas of the black outline were executed. Whilst the majority of outline was painted under the glaze, as is typical with Iznik pottery, some areas appear to have been painted on top of the glaze before it was fired. This technique relates to the application of black outline oncuerda seca pottery and is particularly visible in the heavy outline of the border palmettes.

Bonhams Head of Islamic and Indian Art, Oliver White, said, "This is a very intriguing tile. I've never seen one like it. The maker may have been aiming for a novel effect or perhaps he simply got distracted and forgot to complete the outlining before applying the glaze and then rectified his oversight afterwards. Either way, the effect is very striking." 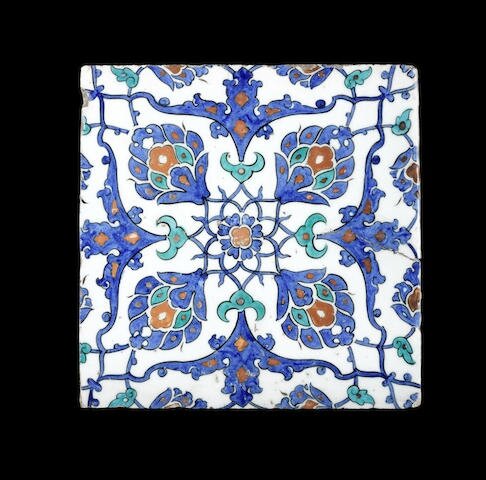 of square form, decorated in raised-red, cobalt-blue, and green with black outline on a white ground with a central eight-petaled flowerhead, alternately issuing four lotuses and four double split-palmette motifs, the split palmettes joining at the tips to create a large quatrefoil motif, partial lotuses to each edge; 26.3 x 26 cm.

Note: Elements of the design of this tile, which was produced in the last decade of Sultan Suleyman's reign, compare with those on a lamp produced for the Suleymaniye Mosque in the Victoria and Albert Museum. (See Nurhan Atasoy and Julian Raby, Iznik: The Pottery of Ottoman Turkey, London, 1989, p. 224, no. 377.) The sparse orangey-red and turquoise-green also support this dating. of square form, decorated in raised-red, cobalt-blue, green and black outline on a white ground with a large saz leaf overlaid with partial flowerheads, behind a spray of flowers and buds comprising a partial rose and carnation, the left edge with a border containing partial flowerheads and foliate motifs; 24.7 x 24.6 cm. of shallow rounded form on a short foot, decorated in raised-red, cobalt blue, green and black outline with a spray of tulips, roses and carnations issuing from a leafy tuft, the rim with a band of cloud motifs, the exterior with a band of alternating rosettes and paired tulip motifs, old collection labels to base; 29.2 cm. diam.

Iznik pottery was produced in the western Anatolian town of Iznik, in modern day Turkey, from the closing decades of the 15th century until the end of the 17th. Iznik was already an established centre for the production of simple, domestic, earthenware pottery when craftsmen, responding to demand from the Ottoman Court, began to make high quality stonepaste objects. These were initially decorated with traditional arabesque patterns combined with design elements taken from Chinese blue and white porcelain.

Throughout the 16th century Iznik pottery flourished, reaching its artistic peak between 1560 and 1600. Designs became more fluid and less symmetrical; the colour palette gradually changed, incorporating pastel shades of turquoise, sage green and pale purple. By the end of the century, bolder colours had been introduced, with strong red and bright emerald green becoming standard. A series of catastrophic fires, combined with an economic slump across the Ottoman Empire, badly affected production and demand at the beginning of the 17th century. By the time the economy recovered, Iznik's main rival, Kütahya, had forged ahead. Pottery continued to be made at Iznik, but the standard of workmanship was poor and the designs poorer. By 1800, production had ceased entirely.