PRINCETON, NJ.- The ceramics in this installation not only highlight the technological and artistic developments that occurred over two millennia on the Korean Peninsula but also demonstrate the complex position ceramic research occupies between the fields of archaeology and art history. Ceramics have anthropological and archaeological significance, serving as physical evidence of past human activity. They are also of art historical interest, aesthetically appreciated for their glazes, delicate forms, and intricate decorative techniques.

This installation complements the spring 2014 Tang Center for East Asian Art Lecture Series. Three lectures on Korean art will be given by Professor Song-mi Yi, Professor Emerita of Art History, The Academy of Korean Studies. For more information see:http://www.princeton.edu/tang/lectures/tcls/. This type of stoneware cut-stem bowl comes from the tomb burials of the kingdom of Silla (57 B.C.–A.D. 668). Similar works were produced in the neighboring kingdom of Kaya (42–562), but Kaya works are distinguished by rectilinear cutouts placed one above the other along the foot of the vessel, while Silla wares tend to have a two-tiered checkered pattern, as in this example. The typical Silla cut-stem bowl had a lid and a rim designed to hold the lid in place. This example lacks a rim, and if there was once a lid, it is now lost. This type of bowl should be differentiated from cut-stem stands, which resemble cut-stem bowls but are more elaborately decorated and designed to hold other vessels. This bowl would have been used to provide tomb offerings of food and drink for the deceased.

This cut-stem bowl is an example of one of the earliest known high-fired wares in the world, requiring kiln temperatures in excess of 1000° Celsius. Such wares were produced in woodfired, tunnel-shaped “climbing kilns,” typically built on the sides of hills. This closed-kiln design, in contrast to those for earlier open or semi-open kilns, produces intense and steady heat, allowing for control of the flow of oxygen into the firing chamber. Three Kingdoms period stoneware developed its characteristic gray color from the reduction of oxygen in the kiln chamber; unlike earlier, soft, low-fired earthenware, the pieces are hard, dense, and watertight. The rectangular cut-outs are indicative of Silla style stoneware, unlike those from the kingdom of Gaya, which often are decorated with triangular shapes. This vessel, with its broad shoulders and voluptuous S-shaped profile, exemplifies the Goryeo vessel type called maebyeong. It is decorated with white cranes and clouds that presumably float in the "sky" of the celadon glaze. To create the special technique of sanggam inlay, a design was engraved into the clay body and then filled with white or black clay. Afterward, the entire object was glazed and fired to a celadon hue. While this maebyeong is sparsely decorated, other examples of sanggam are more ornate, with intricate, repetitive designs. Modern reproductions of Goryeo celadon frequently emulate themaebyeong vase type. 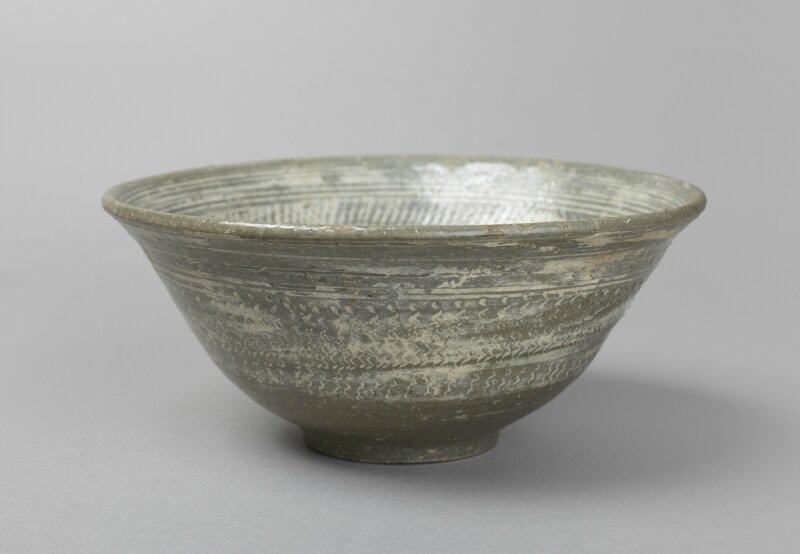 Buncheong, meaning “powdered celadons,” is the successor to Goryeo celadons. While using the same basic materials as celadon, buncheong is distinctive for the decorative use of a white slip underneath the celadon glaze, which creates its “powdered” appearance. These wares are seen as common and rough compared to their Goryeo predecessors, but they reveal a change in patronage and aesthetics that resulted from the new political regime of the Joseon dynasty. Such changes are reflected in official Joseon ideology, which eschewed Buddhism and advocated Neo-Confucianism from Song dynasty (960–1279) China. This bowl has incised designs, which are distinctive of buncheong ware from the southern Jeolla province. Despite its initial popularity, however, buncheong production came to an abrupt end due to the Japanese invasions of Korea from 1592 to 1598. Korean potters taken to Japan initiated buncheong revivals, spreading appreciation of its aesthetics among Japanese potters and patrons. Underglaze porcelain technique and cobalt blue entered Korea through Ming dynasty (1368–1644) China and were initially reserved for royalty. Eventually, production expanded to include an elite clientele. This bulbous jar with a straight neck most likely held wine, and it exhibits the shift away from buncheong after the Japanese invasions of Korea during the late sixteenth century. Underglaze painting in copper red, iron brown, or cobalt blue (the last seen here) became the main decorative mode. The application of painted motifs with a brush expresses a fluid calligraphic aesthetic that is distinct from repetitive sanggam inlay designs or engraved patterns. 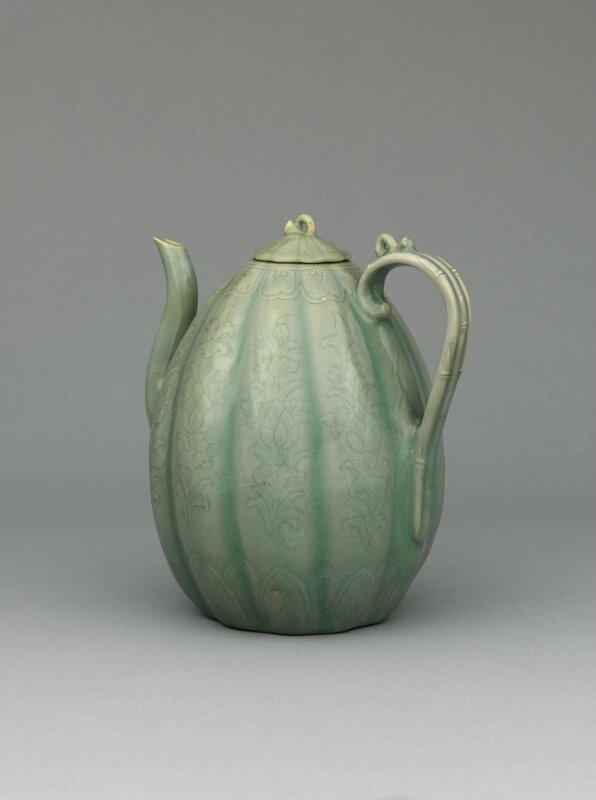