A pair of yellow-glazed incised bowls, Kangxi six-character marks and of the period (1662-1722)

A pair of yellow-glazed incised bowls, Kangxi six-character marks and of the period (1662-1722) 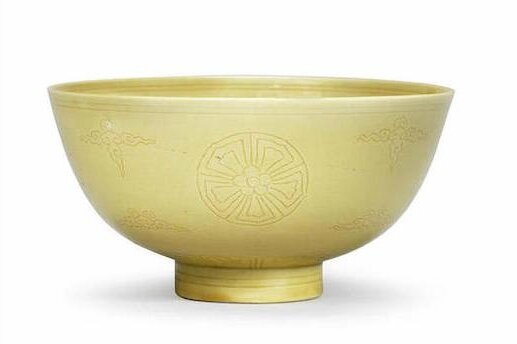 Each finely potted with deep rounded sides raised on a straight foot, the exterior finely incised with four stylised flowerheads alternating with wispy clouds, all above a lappet border, the interior with a further flowerhead, covered with a lustrous glaze of egg-yolk-yellow tone, wood stands. Each 12cm (4 3/4in) diam. (4).

Provenance: William Clayton Ltd., London, acquired by the below on 16 March 1960
A distinguished European private collection, and thence by descent.

Compare a similar example from the Elphinstone collection, now in the Sir Percival David Foundation in the British Museum, London, listed in Illustrated Catalogue of Ming and Qing Monochrome Wares, London, 1989, PDF,A.599; see another, illustrated by R.Krahl and C.von Spee in Chinese Ceramics from the Gulexuan Collection, Lunen, 2003, no.97; and a further example from the Kostolany collection was included in the Oriental Ceramic Society exhibition, Monochrome Porcelain of the Ming and Manchu Dynasties, London, 1948, no.188.

A similar single yellow-glazed incised bowl, Kangxi mark and of the period, was sold at Christie's Hong Kong on 26 November 2014, lot 3291. The bowl is incised on the exterior with four floral roundels divided by cloud scrolls above petal lappets around the foot, the interior with another floral medallion in the centre enclosed within a double circle. The bowl is covered inside and out with an egg-yolk yellow enamel. 4 5/8 in. (11.8 cm.) diam., box

Commentaires sur A pair of yellow-glazed incised bowls, Kangxi six-character marks and of the period (1662-1722)