VADUZ.- The second exhibition of the Hilti Art Foundation has opened in Vaduz. The show focuses on classical modernism and includes works by Gauguin, Picasso, Kirchner, Beckmann and Klee. Contemporary art is prominently featured, with artworks by Imi Knoebel, Gotthard Graubner and Sean Scully amongst others. The exhibition presents 36 selected paintings and sculptures from the internationally renowned private art collection.

After its exceptionally successful exhibition premiere in its own gallery, which is an extension of Kunstmuseum Liechtenstein, the Hilti Art Foundation is proud to present the next instalment, titled “Kirchner, Léger, Scully & more”. Visitors will recognise some of the paintings and sculptures presented on the three levels of the building: 16 of these artworks were featured in the first exhibition. Curator Uwe Wieczorek has picked them again to enable visitors to view them in a new context. Another objective is to keep specific key artworks on display over a longer period of time. “The outstanding works of the pioneers of modernism and of the important representatives of the avantgardes of the first half of the 20th century are a huge benefit for the public. And in regard to art after 1950, there are a lot of links between the collections of the Kunstmuseum and the Hilti Art Foundation”, says Dr. Friedemann Malsch, Director of Kunstmuseum Liechtenstein.

The exhibition starts on the lower ground level of the building with a French touch; this part of the show is devoted to an exploration of the human form, and more specifically the female form. The depictions of women by Lehmbruck, Hodler, Picasso, Léger and Laurens show life in full bloom and at its most beautiful. In contrast, Giacometti’s Quatre femmes sur socle (1950) sculpture conveys a sense of tangible sensuality withdrawing into aloof immateriality. Paintings, and particularly ones by German artists, define the character of the first floor. This part of the exhibition includes four paintings by Ernst Ludwig Kirchner, the key representative of the artist group “Brücke”. Another focal point is set with paintings by Max Beckmann, such as Selbstbildnis mit Glaskugel (Self-Portrait with Crystal Ball), which is now surrounded by other Beckmann paintings from the 1920s, 30s and 40s.

The upper floor is devoted to paintings from 1980 to the present day. This section includes works by Imi Knoebel, Gotthard Graubner and Sean Scully, three artists who applied completely different approaches and techniques, but who all represent abstract art in its most mature form. Michael Hilti, President of the Hilti Art Foundation, is very pleased about the solely positive response to the exhibition. “I have been approached by people who wanted to express their gratitude for the allocation of the artworks and the building itself. It is very satisfying to know that the Hilti Art Foundation is so well received by the public.” 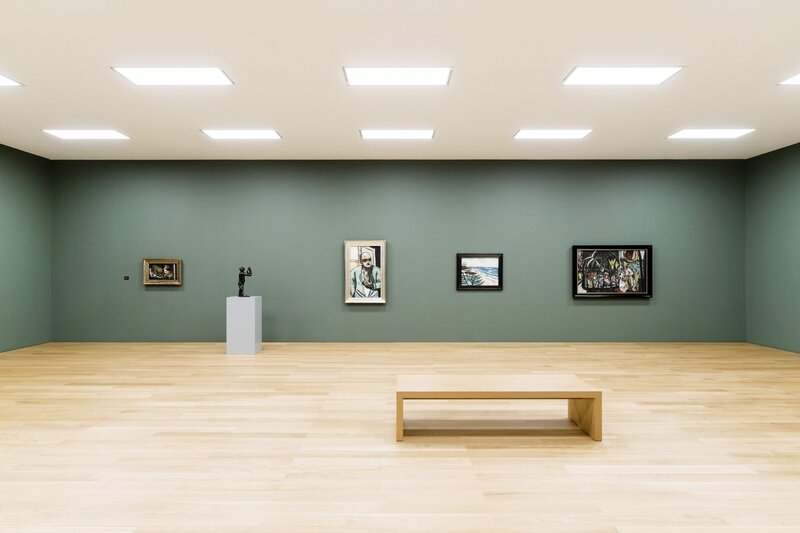